The dream of becoming a human rights attorney and working to lessen the struggles immigrants face is one step closer for a University of Wisconsin Oshkosh alumna.

Erin Hoff, a native of Taylor, Wisconsin, was offered a merit-based scholarship of $40,000 a year to the American University Washington College of Law. Coronavirus-permitting, she plans to move to Washington D.C. at the end of summer to begin her law education. 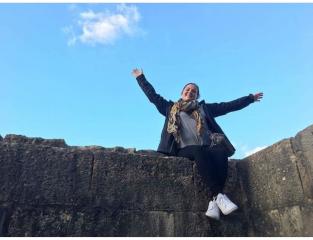 “In five to 10 years I see myself having graduated law school and working in some way to promote the legal rights of immigrants, whether that be working through a nonprofit or even writing legislation and lobbying,” Hoff said, adding that she is especially interested in writing legislation that creates more rights and protections for immigrant victims of human trafficking.

Hoff graduated from the Honors College of UW Oshkosh in May 2019, with a bachelor’s degree in human service leadership from the College of Education and Human Services. She minored in both social justice and Spanish as she planned for her future career. She studied a semester in Spain during her sophomore year. The following year she studied abroad over winter interim in London, England, as part of Honors course

Despite an early interest in law, Hoff didn’t consider it a career option—primarily because the only lawyers she saw were criminal defense attorneys she saw on movies and television.

“After studying abroad, I dove into the social justice program at UWO and decided I was going to pursue some sort of career that allowed me to proactively promote and support human rights,” Hoff said.

Courtney Bauder, director of the Social Justice Minor Program, steered her to an internship at UWO’s LGBTQ Resource Center. The experience was pivotal for her in that it solidified and strengthened her passion for promoting human rights and showed Hoff the good work human rights lawyers can do. 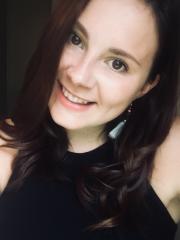 Hoff continued as a human rights intern at the Winnebago County Literacy Council, where she worked to promote adult English language literacy skills for immigrants and refugees. She heard firsthand stories from immigrants and the challenges they faced—a lack of jobs, housing, transportation and childcare—as they sought asylum and/or freedom in the United States. Language barriers and lack of finances compounded matters.

“At this point, I knew that the intersection of my interest in law and human rights would lead me to pursue a career in human rights law,” she said.

Hoff worked to develop more legal skills with an internship at Outagamie County Probation and Parole during the second semester of her senior year at UWO.

Hoff said her inspiration for becoming a human rights attorney is based on her love of culture and travel, as well as her interest in government and law—something that stems back as long as she can remember.

She grew up in culturally diverse households that hosted exchange students, welcomed international family friends and heard her family’s amazing stories of travel. She lived with her stepmom from Brazil and saw the challenges she faced as she sought citizenship.

“These experiences exposed me from an early age to the struggles immigrants face in the United States,” Hoff said. She envisions herself possibly working for a nonprofit or even writing legislation and lobbying, saying there currently is a severe lack of protections and rights for immigrant victims of human trafficking. 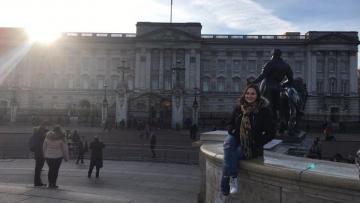 Hoff calls the current push for racial equality overdue and “absolutely essential.” She sees this as a time for her, a white woman, to listen and do what she can to ensure Black people have the same privileges she experiences every day.

Hoff thanked her UWO professors and Bauder, specifically, who wrote a letter of recommendation, for helping her on her educational path. Extensive study-abroad opportunities as well as a campus culture that seemed to support her value in social justice, are what brought Hoff from a tiny town in Jackson County, to UW Oshkosh.

She advised students to take advantage of opportunities.

“My most valuable experience was all my internships,” she said. “Take as many as you can. You learn so much.”

She also found great value in taking advantage of professors’ office hours and getting to know them.

“They could point me toward opportunities and could point out strengths I couldn’t see in myself,” she said. “It helped immensely.”