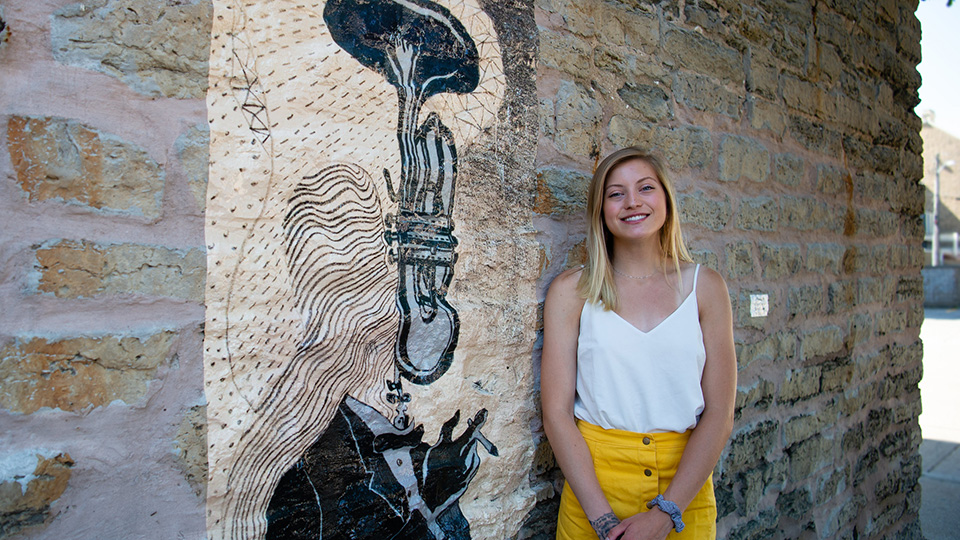 If you’ve walked the streets of downtown Oshkosh since early June, you’re likely to have noticed a few new artistic flourishes on some of the historic brick buildings.

You have a collection of University of Wisconsin Oshkosh students and alumni to thank for many of them.

The new Mini Mural Project, organized by the Oshkosh Public Arts and Beautification Committee, launched in early June and consists of 20 original works of art displayed in 20 locations around the downtown.

It works like a walkable art gallery—and with many of the pieces blocks apart, it’s perfect for the era of social distancing.

Joshua Marquardt, a 2004 UW Oshkosh graduate and owner of Art City Wraps, coordinated the effort, which will bring a little extra life to the downtown for the next few years. He’s a member of the committee, which voted on each piece to whittle down 50 submitted works to the chosen 20, and used his professional tools and skills to physically print and place the art around town.

“It’s important for the artists to have an audience,” Marquardt said. “This was a stage for them to do that.”

At Art City Wraps, Marquardt uses large format printing and design to manufacture and install images on various surfaces, and often does so for a national audience. He’s done projects for Universal Studios and Super Bowl festivities.

With this, the images are printed on vinyl and applied to the buildings using a torch and a roller. The materials are heated up to 500 or 600 degrees, he said, and then quickly pressed to the textured walls. An important fact is they’re able to be taken down when the time comes without any damage to the surfaces. 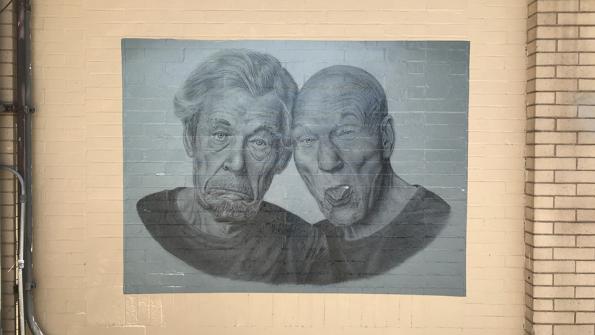 Despite being more than 15 years removed from his time at UWO, Marquardt said there are bonds formed in the Oshkosh art community back then that remain today.

“With the galleries downtown, you start becoming connected to a city or connected to people,” he said. “That’s how I ended up staying (in Oshkosh), is seeing how alive the city was. … The people here are cool, the town is nice, there’s a supportive crew. That was what this project was trying to do as well—showcase that city, showcase this type of community here.”

Many of the 20 artists involved also have ties to UWO.

A drawing by Tatum Spevacek, a senior graphic design major from Sheboygan, is on display. “The Interruption” is featured on the side of the Algoma Building at 110 Algoma Blvd. She explained its creation as the drawing of the sounds she heard outside of her window. That included a man talking loudly and some background noise from birds and a skateboarder. It was originally an 11-by-17-inch print for a lithography class.

“I’ve always wanted my artwork to be seen,” she said. “I’m not really one to show my artwork, so I thought it was a neat opportunity for me to do that.”

The pieces range in size, but many of them max out at either 52 inches tall or wide. An exception is the largest, which stretches to 11 feet in height. The Oshkosh Convention and Visitors Bureau website has an interactive map with background information on each of the artists and where their works are located. Many are on or near Main Street just north of the Fox River.

Marquardt said he installed all 20 pieces in a single day in early June, and they’re planned to remain for three years.

Mike Gelhar, who earned a degree in graphic art from UWO in 2000, is responsible for one of the most instantly recognizable pieces in the collection. “Friends” is a graphite pencil drawing of actors Ian McKellen and Patrick Stewart. The real-life pals who starred in several X-Men movies together are making silly faces in the re-creation of a portrait Gelhar found online.

Because of their connection to sci-fi culture—besides X-Men, McKellen was in “The Lord of the Rings” movies and Stewart is maybe best known from “Star Trek”—Gelhar’s piece is affixed to the side of the House of Heroes building at 401 Main St.

“I just thought it was a really great idea that they were trying to do this and trying to bring art to the downtown,” he said. “Especially by local artists, mostly Oshkosh artists.”