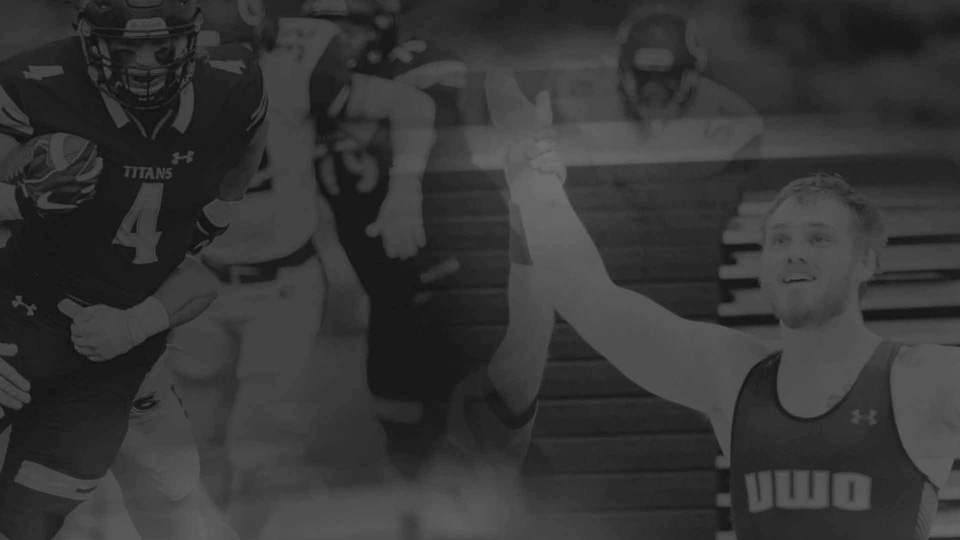 Before the pandemic intruded, fans had plenty to cheer about as the Titans delivered another successful season of athletics in 2019-20. Women’s gymnastics won the WIAC Championship for the first time since 1996, football was a Co-WIAC Champion and the men’s and women’s basketball teams both won their WIAC Tournaments. Six teams also qualified individuals for their respective national championships.

Football: Earned a share of the WIAC Championship and the league’s automatic NCAA Tournament bid after defeating UW-Whitewater in its final regular-season game. The Titans post-season appearance was their fourth in the past five years.

Women’s golf: Earned a third-place finish at the WIAC Championship. Senior Hannah Braun and junior Erika Priebe were both named to the 2019 All-WIAC Team. Head coach Liza Ruetten ’88, will retire this summer after an eight-year run of leading the Titans.

Women’s soccer: Played in the WIAC Tournament for the 27th consecutive season. Juniors Mallory Knight and Addie Schmitz were named to the 2019 All-WIAC Team.

Women’s tennis: Finished fourth at the WIAC Championship. Senior Samantha Koppa finished second at No. 2 singles and teamed with junior Kelley Hodly for a second-place finish at No. 1 doubles.

Women’s basketball: Won the WIAC Tournament to claim an NCAA Championship automatic berth. The Titans reached the Sweet 16 of the national tournament for the third time in four years. Junior Leah Porath was named a d3hoops.com All-American Third Team honoree.

Women’s gymnastics: Won the WIAC Championship for the first time since 1996. The win earned the Titans a spot in the NCGA Championship. Sophomore Emily Gilot was the event champion on the vault at the WIAC’s. Senior Bailey Tkaczuk earned the WIAC Scholar Athlete Award and the NCGA Outstanding Athlete Award, among other honors. Lauren Karnitz was tabbed WIAC and NCGA Coach of the Year.

Women’s swimming and diving: Sophomore Hannah Cunningham finished second with a school-record performance in the 100-yard butterfly at the WIAC Championship, and freshman Mariah Marowsky set a pair of school records while placing in the top nine in three events.

Wrestling: Junior Jordan Lemcke earned his first trip to the NCAA Div. III Championship by winning the 285-pound title at the Upper Midwest Regional. Senior Colten Cashmore finished fourth in the 197-pound weight class to just miss out on qualifying for nationals.

Baseball: The Titans played six games in 2020 before the coronavirus pandemic canceled the remainder of their season.

Softball: The Titans held an impressive 5-1 record six games into the 2020 season before the coronavirus pandemic canceled the remainder of their games.

Men’s and women’s outdoor track and field; and women’s spring golf and tennis: The 2020 spring season was canceled due to the pandemic.