Stock it up: Students helping students with food pantry

Tough decisions are part of growing up. But for some college students, a decision to pay bills comes at the expense of consistent, square meals.

Students at the University of Wisconsin Oshkosh recognized this distressing truth and decided to find a way to stock a free food pantry on campus. The Cabinet opened Feb. 11.

“I believe The Cabinet is one of the greatest accomplishments of the OSA (Oshkosh Student Association),” said Ian McDonald, OSA vice president.

By early March, The Cabinet had provided more than 800 pounds of food to 150 students. While measures taken to protect students and staff in response to coronavirus resulted in the closure of the pantry by mid-March, plans are in place for The Cabinet to resume operations when students, faculty and staff return to campus.

McDonald, a junior political science major, said the project began in 2018-19 under student Ronisha “Roni” Howard’s administration as OSA president. Howard, a Milwaukee native who graduated in June 2019 with majors in political science and women’s and gender studies, worked on getting a space for the pantry. Leaders were able to secure the room next to Titan Underground in Reeve Memorial Union.

“After I was elected vice president of OSA, I spent time during the summer viewing different food pantries, including one at UW-Stevens Point and the Oshkosh Area Food Pantry,” McDonald said. He also started looking for a UWO student director
of the pantry.

Evans’ research showed about one-third of the UWO student population and over half of the University’s population of students of color experience food insecurity.

Hunger, she said, can undermine a student’s ability to learn and complete their degree.

Surprising to some, food insecurity is significantly associated with students who live on campus and are required to purchase a meal plan. The most affordable plan provides 100 meals and $100 in Titan Dollars for a 14-week semester.

“Due to the stress and busy schedules of a college lifestyle, most students can’t afford the time it takes to work a part-time or full-time job,” said Stephanie Cowling-Schroeder, campus wellness dietitian with food service vendor Aladdin. “Unless the college student saved up a lot of money during high school/summer jobs, their funds will be extremely limited during their college years.”

Each semester Aladdin donates $1,000 to help with food insecurity. The funding last semester assisted with start-up costs at The Cabinet.

Cowling-Schroeder said she thinks the pantry is an amazing asset available to students.

“Having a resource such as The Cabinet available on campus helps to reduce the strain on our students, allowing them to fuel themselves properly so they are able to perform better in and out of classrooms,” Cowling-Schroeder said. 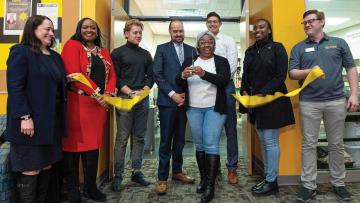 UW System Regent Karen Walsh was on campus in February for a ribbon-cutting at The Cabinet and announced that she was contributing $2,000 from her family’s foundation, the Berbeewalsh Foundation.

Walsh said there were students experiencing food insecurity when she was an undergraduate in the 1970s, but the issue wasn’t discussed. She credits today’s generation of students for having the courage to talk about world problems and put the “talk into action.”

Walsh followed her gift with a challenge to match up to an additional $5,000 raised in donations through Dec. 31, 2020.

“My goal is to not only raise additional funds for the pantry, but also to encourage the community to recognize and support the efforts of the students to help their own,” she said. “I love that this effort is coming straight from them to their fellow students.”