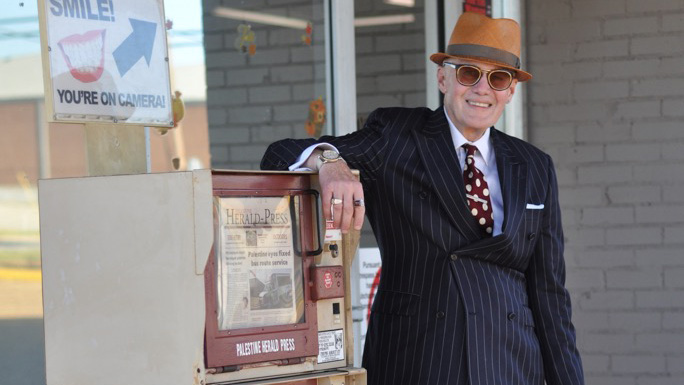 After a woman died in a Texas jail in 2018, Jeff Gerritt was told by the local sheriff that the incident wasn’t newsworthy.

Gerritt, editor of the Palestine Herald-Press in Palestine, Texas, thought otherwise. So much so that the University of Wisconsin Oshkosh graduate continued to sniff around, ask questions, pull records and, eventually, produce a series of hard-hitting editorials about what turned out to be a series of deaths in county jails across the state.

The project, published in 2019, won him the Pulitzer Prize in Editorial Writing earlier this year.

“I’ve always kind of gravitated towards people that were sort of on the margins—homeless people, drug addicts, street people, prisoners, people that I could advocate for in some way who didn’t have a platform,” Gerritt said. “I don’t like the saying they don’t have a voice because they have a very good voice. They don’t always have a platform. I liked giving them that.”

Gerritt, who grew up in Oshkosh and Milwaukee, graduated from UW Oshkosh with a philosophy degree in 1978. He was Jeff Kleinhuizen then—he swapped out his last name for his father’s first name, Gerritt, when he began writing columns for the Detroit Free Press. The pronunciation of the longer name, he said, was tripping up too many people.

Detroit was one of several stops on a journalism career that spans 35 years and began at The Northwestern in Oshkosh. He found his passion as an advocate for the under-served there as a young investigative reporter. One of his standout projects from those days was a series on life inside the Oshkosh Correctional Institution.

“That was an experience that sort of got my interest in corrections,” he said.

He’d move on to work at papers in Green Bay, Detroit and Toledo, Ohio, before heading south to East Texas. As a journalist he’s traveled to Cuba, Brazil, Tanzania, Israel and the West Bank, where he interviewed Yasser Arafat.

His interest in the criminal justice system, and now with many years of experience in major markets, led to the work that’s earned him major accolades in recent years. Next to the Pulitzer—the most coveted prize in the industry—are a National Headliners Award for editorial writing and the Walker Stone Award for opinion writing from the Scripps Howard Foundation, among others.

While after leaving UWO he earned a master’s degree in journalism from Marquette University, his undergrad education has always held significance. That remains true.

“Once I became an editorial writer, the skills that I learned as a philosophy major at UW Oshkosh really came to the fore,” he said. “The logical deductive reasoning to make arguments, that is very much part of editorial writing. I think it was invaluable that I was a philosophy major at UW Oshkosh and I had some very good teachers there. I got a lot out of it.”

The editorials that won the Pulitzer exposed how pre-trial inmates had died while in custody in a small Texas jail, a disturbing trend across the state. The woman whose death was brushed off as “not news” was Rhonda Newsome, who’d been grossly mistreated by jail staff and became one of several upsetting incidents to be uncovered. The Pulitzer administrator would go on to say that Gerritt “courageously took on the local sheriff and judicial establishment, which tried to cover up these needless tragedies.”

Making the effort all the more impressive is the Herald-Press is based in a city of about 17,000 people. The editorials led to statewide changes, and Gerritt wound up in a Pulitzer class that includes newsrooms and journalists from the New York Times, Washington Post and Baltimore Sun. In coverage of the award by NPR, the words “tiny Texas newspaper” made the headline.

“I’d be lying to say this hasn’t made my career a lot more fulfilled,” said Gerritt, who like a true newspaperman acknowledged the Pulitzer Prize will likely be referenced in the lead of his obituary. “It’s bizarre but it feels good … I’m proud of it.”