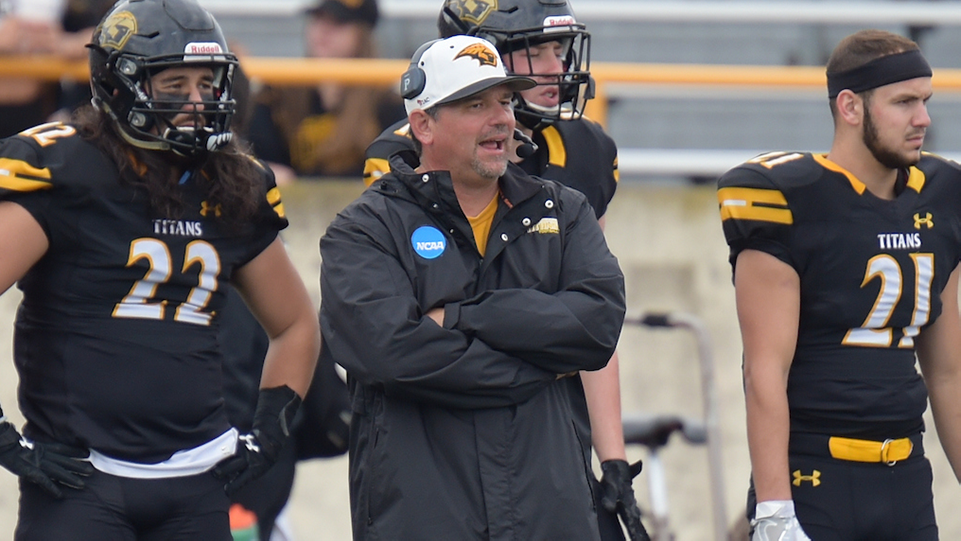 The Wisconsin Football Coaches Association (WFCA) announced that UW-Oshkosh’s head football coach Pat Cerroni will be inducted into its 2021 class.

The 42nd Annual Hall of Fame event will take place in Madison at the Marriott West on Saturday, April 10, 2021. The WFCA will induct four additional members and 10 representing the class of 2020. Two National High School Athletic Coaches Association Hall of Fame inductees, The Dave McClain Distinguished Service Award recipient and one recipient of the Positive Influence of Coaching Award selected in 2020 will also be presented at the 2021 banquet.

Last season Cerroni led the Titans to an 8-3 record, a share of the WIAC championship and the program’s fifth NCAA postseason trip in the past eight years. Cerroni earned WIAC Coach of the Year honors for the fourth time as the Titans led the conference in passing yards (182.7) allowed and sacks allowed (1.27) per game. UW-Oshkosh earned a share of the conference title and the WIAC’s automatic berth into the Division III Championship with a 27-20 victory over third-ranked UW-Whitewater in the regular season finale. The Titans completed their program record-setting ninth consecutive winning season in 2019.

In 2018, the Titans finished with a 6-4 record and a third-place 4-3 mark in conference play, completing their eighth consecutive winning season. The Titans produced an eight-year run of winning seasons just once in program history from 1918-25.

During UW-Oshkosh’s historic 2016 season, Cerroni coached the Titans to wins against six of their seven opponents that advanced to the NCAA postseason. UW-Oshkosh finished second to defending national runner-up UW-Whitewater in the WIAC standings, but the Titans received an at-large berth into the 32-team field and concluded the season ranked second in the country. UW-Oshkosh’s postseason run to the national championship game included home victories over Washington University in St. Louis (Mo.) and Saint John’s University (Minn.) before the Titans won at the University of St. Thomas (Minn.) during the quarterfinal round. UW-Oshkosh then secured a home victory over John Carroll University (Ohio) to advance to the title game against top-ranked University of Mary Hardin-Baylor, which edged the Titans by a 10-7 score in a nationally televised game on ESPN from Salem, Va.

In 2015, UW-Oshkosh advanced to the quarterfinal round of the NCAA Championship and concluded the season with an 11-2 record. The Titans ended UW-Whitewater’s NCAA-leading 36-game winning streak with a 10-7 decision in the regular season and established a WIAC record with 829 yards of offense during a 69-14 rout over UW-Stout.

UW-Oshkosh ceded just six fourth-quarter points during the 2015 campaign while becoming the first team in WIAC history to score 60 or more points three times in a season as quarterback Brett Kasper was named the WIAC Offensive Player of the Year. The Titans set a school record for points in a game with their 86-0 triumph over Finlandia University (Mich.) en route to scoring a program-record 550 points on the season. Defensively, UW-Oshkosh produced four shutouts in the same season for the first time since 1933.

In 2014, Cerroni led UW-Oshkosh to a second-place finish in the WIAC with a 6-1 record. The Titans’ sole league loss was at top-ranked and eventual national champion UW-Whitewater.

In 2013, Cerroni coached UW-Oshkosh to wins in its first six games. The Titans peaked at eighth in the national rankings before finishing the season 11th. UW-Oshkosh’s only defeats were by scores of 17-14 to fifth-ranked and eventual NCAA champion UW-Whitewater and 17-16 to 10th-ranked UW-Platteville.

UW-Oshkosh won its first 13 games of the 2012 season before suffering a 28-14 road loss to fourth-ranked University of St. Thomas in the semifinals of the NCAA Championship. The fifth-ranked Titans posted victories over five nationally ranked teams, including wins of 31-24 over third-ranked Linfield College (Ore.), 28-13 over fifth-ranked UW-Whitewater and 34-13 over 14th-ranked UW-Platteville. UW-Oshkosh also captured the WIAC championship that year for its first league title since 1976. A program record seven Titans were named to the D3football.com All-America Team.

In 2011, the Titans went 7-3 and finished second in the WIAC listings. UW-Oshkosh suffered losses that season of 20-17 to top-ranked and eventual national champion UW-Whitewater, 41-17 to second-ranked University of Mount Union (Ohio) and 30-24 (overtime) to UW-La Crosse. Cerroni’s first UW-Oshkosh team in 2007 also went 7-3.

Cerroni joined the Titans as an assistant coach in 2000. He came to UW-Oshkosh after three seasons as the head coach of Menomonee Falls High School. In 1997, he guided the Indians to a 7-4 record and an upset victory of defending state champion Hartland Arrowhead High School in the first round of the WIAA Division 1 Playoffs.

Cerroni and his UW-Oshkosh football team have performed several community services projects over the past seven years, including events associated with the Oshkosh Boys & Girls Club, Oshkosh YMCA, Habitat for Humanity, Old Glory Honor Flight, Gus Macker 3-on-3 Basketball Tournament and Feeding America. In 2015, Cerroni received the Excellence In Leadership Award for his work with Be The Match®, a National Marrow Donor Program in which six of his players have donated to.

A veteran of the U.S. Air Force (1984-88), Cerroni earned his bachelor’s degree from Carroll University in 1992 and his master’s from UW-Oshkosh in 2004. The Johnson Creek native was a member of Carroll University’s 1988 football team that shared the CCIW title.

The Hall of Fame Banquet is open to the public. For more information on the event, click here.