A significant amount of good continues to rise from a death 30 years ago that claimed a vibrant employee at the University of Wisconsin Oshkosh’s Fond du Lac campus.

The three sons of the late Bernie Jones have kept their father’s spirit alive—hosting a golf outing each summer the past three decades toward student scholarships for UWO Fond du Lac. The overwhelming success of the BJ Big Cup Scramble Golf Outing has built an endowment that will fund the scholarships indefinitely. 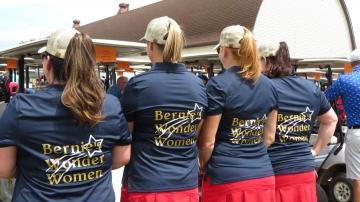 Marking its 30th year in 2020 at Rolling Meadows Golf Course, the event has provided $36,900 in scholarships to 62 students.

“It’s pretty amazing to think that my father is keeping me so busy with interviews and multiple awards 30 years after his passing,” said Jones’ oldest son, Brian Jones of Fond du Lac, who organizes the event and manages the scholarship fund.

When Bernie Jones passed, the faculty and staff at UW-Fond du Lac put together $500 for the first two scholarships in his name. Someone suggested combining Bernie’s love of golf and education with a golf tournament to continue to fund scholarships in his name. Despite being a college sophomore, Brian Jones planned the inaugural event from his dorm room. (At the time, brother, Jeff, was a high school student and Travis, a junior high student.)

Coronavirus added uncertainty about whether this year’s 30th anniversary event would be held, but adjustments were made with a shot-gun start for golfers and the dinner and music moved to a spacious outdoor setting.

Honoring a husband and father

The fundraiser began in 1991 after Bernie Jones’ sudden passing of a heart attack in 1990 at the age of 44. A golf outing was held to honor and remember Jones—an avid golfer. All proceeds have been put into a designated fund, with two scholarships awarded annually to students attending the Fond du Lac Campus. 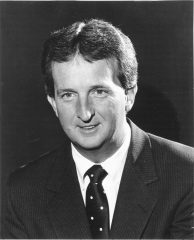 The campus was a place Bernie held close to his heart. He was an active non-traditional student at the campus formerly known as UW-Fond du Lac. Basketball coach Dick Knar convinced Jones to help out the basketball team that was short on players. The unlikely student-athlete was believed to be the oldest college basketball player in the U.S., at age 40.

Jones went on to UW Oshkosh to finish his degree and played on the golf team. As he was completing his studies, UW-Fond du Lac hired him from a pool of 85 candidates to become business manager and golf coach.

The Bernie Jones Scramble and Scholarship Fund was started in his name at the former Ledgewood Golf Course. It moved to Rolling Meadows the second year, where it has remained.

“It’s a truly wonderful and dignified act for the Jones family to continue to provide scholarships for UWO Fond du Lac students for these 30 years,” said Barb Senn, executive director of the UWO Fond du Lac Foundation. “Each year the Bernie Jones Big Cup golf outing provides at least two students with a significant scholarship. The family has remain dedicated and selfless, putting the needs of students first. We are grateful to honor their wishes as we select the students and award the scholarships.” 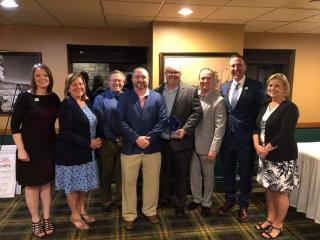 With the passing of Bernie’s wife, Kathy Jones, in late 2018, the Jones brothers launched a new initiative: the Kathy and Bernie Jones Legacy Fund, established to provide funding to causes in the greater Fond du Lac area that the Jones parents would believe in. The first grant went to a student project at Sabish Middle School in Fond du Lac.

For all of their efforts, the Jones family received a special award from the Fond du Lac Foundation in fall 2019 for outstanding philanthropic support of the Fond du Lac community.

“I think my parents would be really proud of the fact that we were able to turn both of their losses into long-term positive impacts on causes they were passionate about with the help of the community,” Jones said.