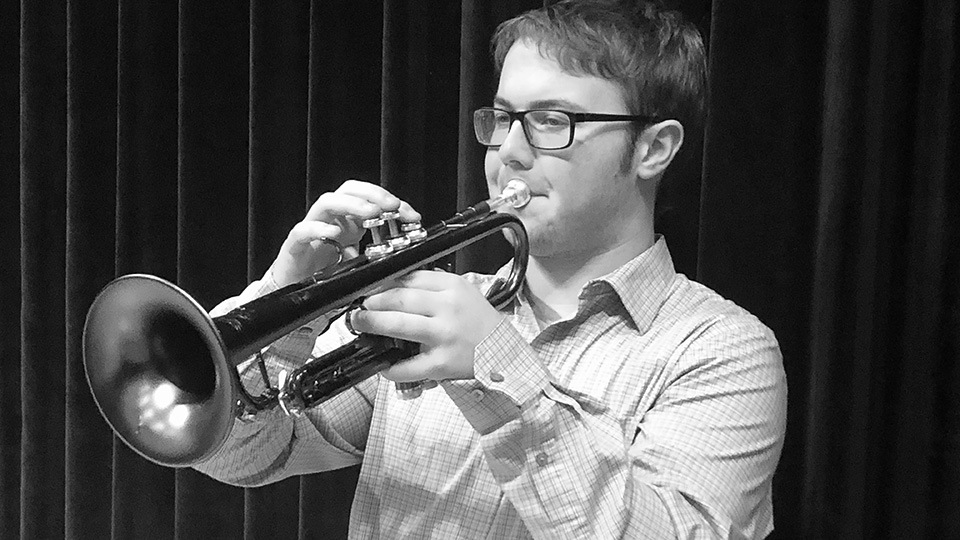 It may be virtual, but one University of Wisconsin Oshkosh music student found an audience of tens of thousands this summer.

Max Volk, a senior majoring in music education and trumpet performance, recently won an online competition run by the New York-based brass band Lucky Chops. The result is a collaborative performance video featuring upwards of 300 musicians that’s surpassed 40,000 views in about a month.

The challenge issued by the band was for a large ensemble arrangement for their song CoCo. Volk, a Combined Locks native who said he’s followed the band since high school, decided to take a swing. He submitted his arrangement in late June and a few days later received a text message that he was the chosen winner.

Lucky Chops then sent out a call to their musically inclined fans around the world to film themselves playing a CoCo part to then be assembled into one collage-style video. Each of the parts drawn up by Volk were then distributed and, in the end, more than 300 players—Volk and his trumpet included—make up the final version.

Besides the performance video, Volk won some Lucky Chops sheet music and was invited to take part in an online master class.

“Those were the two prizes,” he said. “But honestly it was just fun writing it and seeing everyone playing it. I still look back at the video and I smile at all the young people playing, all the older people playing. That was honestly the best part about it.”

The original version of CoCo recorded by Lucky Chops features six instruments. Volk’s version has parts for 25. Needless to say, many people in the collage version are layered on top of each other, including saxophonist and former Lucky Chops member Leo Pellegrino.

Marty Robinson, jazz ensembles director and trumpet performance teacher, said he was both thrilled and shocked to learn Volk had taken this honor. He was shocked only because these types of competitions are open to international talents and are often won by professionals entrenched in a large, urban music scene or students at larger music schools with highly regarded graduate music programs.

“I think it’s a reminder that UWO has some amazing students throughout our university and here especially in our music department,” Robinson said. “In my 16 years here, I’ve often had people ask me what my students are like, and I tell them that our best music students—such as Max Volk—can go toe-to-toe with those at any other university.

“We send our music alums into some of the finest grad programs in the country, or out into amazing music business or recording careers, or into a K-12 music education position with a wonderful and thorough level of preparation, and it reflects strong teaching, hard work by our passionate students, and a vibrant sense of musical community that is inspiring for all of us.”