A playwright with a long history at the University of Wisconsin Oshkosh has been staying busy while most of the arts world remains on hiatus.

Professor emeritus Richard Gustin, who was the theater director at UW Oshkosh’s Fond du Lac campus for 25 years, recently had one of his works read virtually as a fundraiser for a Chicago performing arts group. 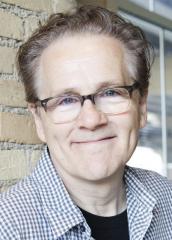 The play, A Sparrow Falls, was written during Gustin’s sabbatical in 2014. The next year he directed and produced it during the spring semester on the Fond du Lac campus.

A newly formed Chicago-based group of creatives called the Ubiquitous Players gathered virtually on July 25 for the reading. The event was a benefit for an organization called the Chicago Dramatists and its new Lydia R. Diamond New Play Award, which will be given annually to an African American playwright. The daytime reading raised $500 and featured 18 Ubiquitous Players performers. (A Sparrow Falls can be presented by as few as three actors or upwards of 25.)

“The play has such wonderful language, and a rich expanse of stories and ideas, from the Holocaust to politics, human responsibility, and even hope,” said Susan Gosdick, one of the actors who took part.

Playwright Richard Lyons Conlon wrote of the performance: “… a beautiful, devastating and hauntingly poetic depiction of the ‘forgotten people.’ The fragile structure of the play’s powerfully lyrical lines required on-point performances and each player delivered brilliant interpretations. Bravo to all!”

Gustin, who lives in Milwaukee, said he’s continued to edit and refine A Sparrow Falls since its staging in Fond du Lac. It’s set during the Holocaust and is story of a group of people on “a journey of forgetfulness” and leaders vying to guide them forward.