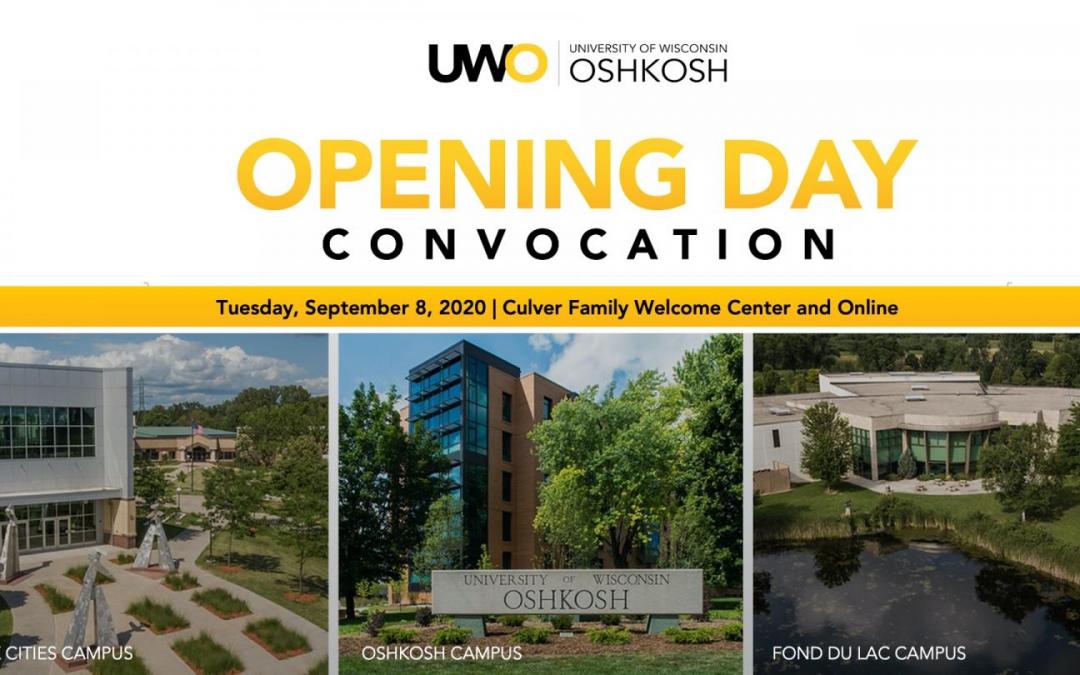 The impact of the coronavirus pandemic on the University of Wisconsin Oshkosh and the response of faculty, staff and students was at the forefront of remarks in Tuesday’s Opening Day Convocation.

For the first time, due to the pandemic, the UW Oshkosh Opening Day event was watched in a livestream fashion.

Winners of several distinguished awards were recognized at the awards ceremony for faculty and staff that kicks off the 2020-21 academic year. The event featured addresses by Chancellor Andrew Leavitt and Provost John Koker, along with the debut of a video that showcased campus efforts to stay safe during the pandemic. 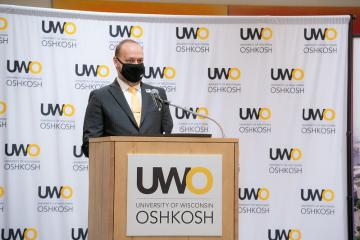 Leavitt, delivering his sixth opening day address, said he believes the 149th year for UWO, with classes starting Wednesday, will go down as the most challenging year in the institution’s history.

He called the opening of the campuses “nothing short of remarkable.”

He credited faculty and staff for their devotion to the success of the institution and its students and said in midst of a worldwide pandemic, the goal at UW Oshkosh is to open campuses safely and keep them open the entire academic year.

Leavitt said one of the greatest moments of his professional life occurred last spring as he watched faculty, staff and students pivot from on-campus learning to completely online learning in just two weeks.

“There was a can-do spirit and laser focus on accomplishing a task that would normally take years,” he said. 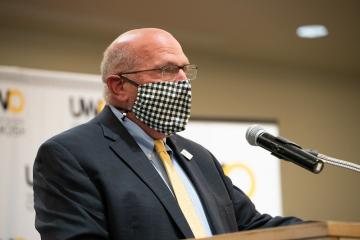 Koker spoke of the tireless way people from across campus worked since March to prepare for the return to UWO campuses.

“Within departments, units and programs across the University, faculty and staff worked together to ensure that students would not just succeed this fall, but feel a deep sense of support and belonging in these challenging times,” he said.

Leavitt urged UWO faculty and staff to harness some of the knowledge and experience of adapting and innovating at speeds and magnitudes no one imagined, to be different as people and as an institution.

“In order for our university to thrive in the coming decades, we must become equally fluent in face-to-face, hybrid and online instruction,” he said. “We must innovate—creating new teaching methodologies and modalities, degree programs, certificates and credentials.”

He said it can be done holding dear the commitment to liberal education.

“A liberal education is still the best hedge against change and uncertainty and is a foundational element of this institution,” Leavitt said.

His wishes were for UWO staff and faculty to safely open and operate the institution and asked them to support one another as they “collectively lift up yet another generation of people to achieve their greatest potential.” 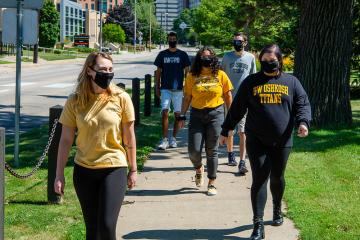 Wednesday marked the start of classes for fall 2020.

Finances, enrollment and the Sesquicentennial in 2021 were discussed, as well as the ongoing focus on diversity and equity.

“We at the University of Wisconsin Oshkosh need to continue our work to foster campus communities that are sustainable, inclusive and welcoming of diversity,” Koker said. “The dimensions of inclusion for faculty, staff and students include access and equity, diversity in curriculum, learning and development and a healthy University climate.”

Koker announced that Gray Associates will assist in evaluating the UWO program portfolio as a new academic plan is developed.