Robert LeBuhn, who has guided a variety of tennis organizations for the past 18 years, was named the interim head women’s tennis coach Thursday at the University of Wisconsin Oshkosh. 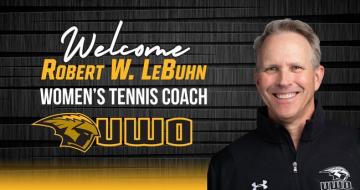 LeBuhn joins the UW Oshkosh coaching staff after serving as both the Director of Racquets at the Green Bay Country Club (April-September) in Bellevue and a staff professional at the Kroc Tennis Center (September-March) in Greenville, South Carolina, since 2017.

LeBuhn, just the sixth head women’s tennis coach at UW Oshkosh since the 1978-79 season, replaces Robert Henshaw, who resigned in August after coaching the Titans for the past five years.

“Robert brings a wealth of experience into our women’s tennis coaching position, and I’m confident that he has the talents and the approach to effectively lead our program,” said Darryl Sims, UW Oshkosh Assistant Chancellor, Athletics. “Robert values the importance of providing a quality student-athlete experience, and I know that our team will gravitate toward his energy and personality.”

During his employment at the Green Bay Country Club, LeBuhn administered tennis programs for all ages. He also developed a business plan, oversaw the yearly budget and led a staff of five at the six-court tennis facility. LeBuhn’s tenure at the Kroc Tennis Center in South Carolina included his implementation of the ACEing Autism Program. He also successfully introduced a range of new training styles and special events to help develop and promote the sport of tennis.

“I’m incredibly lucky to be in this position at UW Oshkosh and feel blessed for having the opportunity to lead a group of young women on and off the court,” said LeBuhn. “My goal is to help our student-athletes develop into the best players they can be and guide them to be outstanding people. To be a part of UW Oshkosh Athletics is an honor, and I will work tirelessly to make the most of this opportunity.”

A New Jersey native, LeBuhn helped his prep school to a national championship in 1983. He won a state singles championship the same year. He went on to play Division I tennis at Lafayette College (Pennsylvania) and later moved to coaching. In the early 2000s, he received three “coach of the year” honors for his work leading several high school teams.

He has served as a club manager and tennis professional at locales in New Jersey, California, Michigan, Hawaii, Green Bay and South Carolina.

The UW Oshkosh 2020-21 tennis season is scheduled to begin in March 2021, after postponement of the fall agenda due to the coronavirus pandemic. The Titans compiled an 8-4 record a year ago, finishing fourth in the conference.