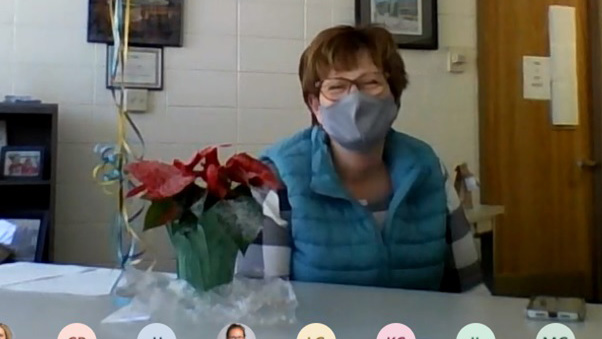 Deb Suess, who works for the kinesiology and physics departments as an academic department associate at the University of Wisconsin Oshkosh, has been named the recipient of the January 2021 STAR Award.

She was nominated by Dan Schmidt, professor and co-chair of the kinesiology department.

“Deb Suess is an esteemed member of the kinesiology department, University and community and is most deserving of the UW Oshkosh STAR Award.

Beginning last summer, Deb took it upon herself to go through the men’s and women’s locker rooms in Albee Hall and identify which lockers were still being held by people (with combination locks on them) who were no longer students or who no longer worked for UW Oshkosh. In other words, these lockers had locks on them but had not been utilized in years. Deb painstakingly reviewed old records and attempted to contact people who once held the lockers. Following numerous emails and other correspondences, a number of people stepped forward and cleaned out their contents. We then removed the contents from those lockers of people who Deb wasn’t able to contact or locate and who were also no longer affiliated with the University. This extended process has resulted in much more available locker space and would never have happened without Deb’s leadership and tenacity.

The second example is one where Deb’s role has evolved in recent semesters. We are a small department as far as faculty/staff are concerned with a large number of kinesiology students. When Campus Preview Days occur, the kinesiology table at Reeve Union requires staffing and someone is needed to lead the tour of our facilities. Deb has become our ambassador. We will ask a kinesiology student to escort prospective students and their parents over to Albee where they will then be handed-off to Deb. She will then proceed to make a nice verbal presentation to these future UWO students while leading the group throughout Albee Hall. This includes briefly introducing them to our faculty who are often teaching Friday morning classes. The importance of Deb’s personal touch can not be understated. Prospective students and parents want to experience a human connection when they tour our campus and no one does this better than Deb Suess.

I can think of no one more deserving of a STAR Award than, kinesiology’s very own, Deb Suess.”