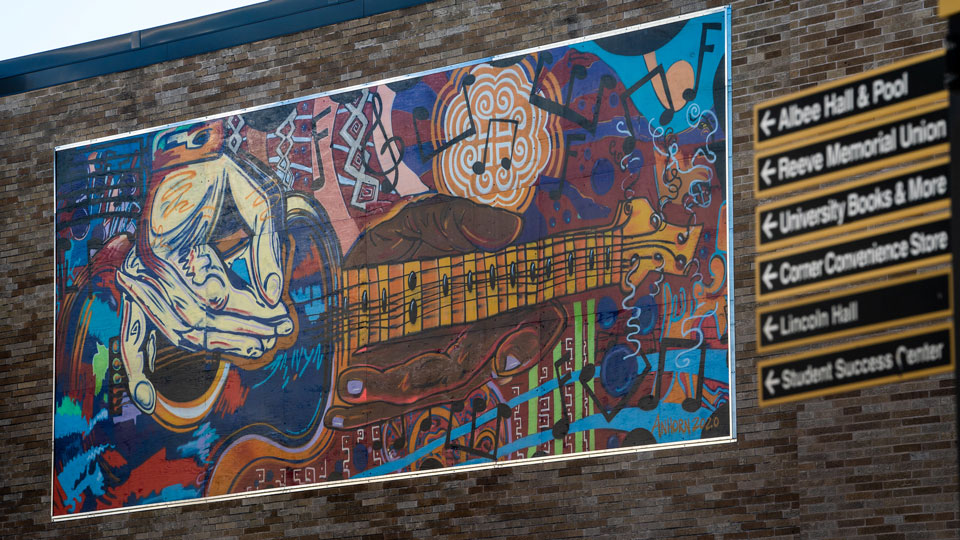 Same Song: A colorful―a unifying musical theme celebrating differences―was unveiled by the UW Oshkosh Multicultural Student Task Force on the Oshkosh campus in September. Three years in the making, the student-led initiative represents how the UWO community values diversity and inclusion and supports all students.

Beth Johnson, a member of the geology faculty on the Fox Cities campus, earned an Exchange Award from the Association for Women Geoscientists for her work as editor on the Geological Society of America’s Women and Geology: Who Are We, Where Have We Been, and Where Are We Going. The 2018 publication is significant, Johnson said, because it highlights the struggles and progress women have made in a STEM discipline typically dominated by men.

UWO Capt. of Police Chris Tarmann developed a mobile application designed to help law enforcement officers who are impacted by the significant stresses of the job. The free app provides a listing of mental health services for law enforcement professionals across the state. Tarmann’s mission was simple:
save law enforcement lives.

A digital marketing project undertaken by UWO students in the spring earned recognition from the Mid-American Business Dean’s Association. The assignment, called Small Business Marketing SOS, was put together by digital marketing lecturer Kathy Fredrickson and connected students with small business owners in the early months of the coronavirus pandemic.

Fox Lake native Olivia Holland, a sophomore majoring in Spanish and education on the Fond du Lac campus, was awarded three scholarships and celebrated with dozens of other students at a small September ceremony. The UWO-Fond du Lac Foundation Inc. handed out nearly $50,000 in scholarships.

Two UWO educators will take part in the Wisconsin Teaching Fellows and Scholars Program for 2021-22. Ashay Desai, a management and human resources professor, and Don Hones, a second language and multicultural education professor, are among the 26 UW System faculty and staff taking part. The yearlong program was postponed until the spring because of the coronavirus pandemic.

Associate Dean of Students Houa Xiong was named as one of the state’s 48 most influential Asian American leaders by Madison 365. Xiong has worked at UWO since 2003 and spent 15 years as an academic adviser. She jumped to her current role in May 2019.

UWO was named among the top schools in the nation for the next generation of web designers by College Magazine. The No. 6 national ranking comes thanks to the Interactive Web Management program, which involves students thinking well beyond the technology aspect of web design.

Led by UWO geologist Timothy Paulsen, a team of researchers published an analysis of sandstones from Antarctica indicating there may be important links between the generation of mountain belts and major transitions in Earth’s atmosphere and oceans. The study was published in the international peer-reviewed journal Terra Nova.

Joseph Frederickson, a vertebrate paleontologist and director of the Weis Earth Science Museum on the Fox Cities campus, published an analysis of raptor teeth in the peer-reviewed journal Palaeogeography, Palaeoclimatology, Palaeoecology. It showed Velociraptors and their kin likely did not hunt in
big, coordinated packs like dogs. Apologies to Jurassic Park.

Communication studies senior Gabrielle Newman was one of five UWO students who participated in the 2020 Student Research and Innovation Showcase and placed third in the competition held as part of the WiSys Spark Symposium Virtual Series. The Oshkosh native’s presentation was titled Reframing Womanhood: A Rhetorical Analysis of Ada James’ ‘The Womanly Woman.’

The Wisconsin Space Grant Consortium named UWO Fox Cities campus student Bella Ness to the 2019-20 Elijah High-Altitude Balloon payload team. The award is funded through a NASA training grant, and Ness was selected from a statewide pool of applicants.

Morgan Churchill, an assistant biology professor and vertebrate paleontologist, authored two research papers published in peer-reviewed journals in July. One in Current Biology describes a new type of giant predatory dolphin fossil and another, in BMC Biology, was a study that examined 172 toothed whale skulls to quantify cranial asymmetry and reconstruct the evolutionary history of the aquatic mammal.

Matt Richie, an assistant criminal justice professor, published Managing the Rabble with Dignity and Respect, the results of years of studying how correctional officers manage the jail population. His findings reveal a great deal of the work involves interpersonal communication skills rather than physical force. The study was printed in the June 24 issue of the Journal of Crime & Justice.

UWO was one of three UW System schools to collaborate on a study to identify ways for state manufacturers to develop more products for green- energy technologies. Advancing Wisconsin’s Green Manufacturing Economy was released in July and was the result of a yearlong study by faculty, staff and student researchers at UWO, UW-Eau Claire and UW-Milwaukee.

UWO and the Wisconsin Paper Council are launching a yearlong project to develop a strategic framework for the future of Wisconsin’s paper industry. Headed by UWO’s Center for Customized Research and Services, the project is one of several awarded funding under WiSys’s Ignite! Program to provide faculty, staff and students across the UW System’s 13 comprehensive universities with opportunities to apply their knowledge to build the state’s economy.

Ally Chard, who graduated with degrees in human resource management and Spanish in the spring, became the fourth student in the University’s history to earn a Fulbright U.S. Student Program award. She’ll travel to Spain to work as an English teaching assistant for five months in January.

The UWO BSN@Home program was ranked the No. 1 online Registered Nurse to Bachelor of Science in Nursing program in Wisconsin and 25th in the U.S. for 2020 by RegisteredNursing.org.

A one-act play titled God is an Old Drag Queen by senior Macrina Schry was the winning entry in the 2020 UWO Student Playwriting Contest. The work by Schry, an English major from Oshkosh, is set in a Boston church in the 1990s and explores themes of sexual abuse and the AIDS crisis.

The Wisconsin Football Coaches Association announced that UWO head football coach Pat Cerroni will be inducted into its 2021 class. The 42nd annual Hall of Fame event will take place in Madison on April 10. Cerroni has guided the Titans to a 103-42 record (.710 winning percentage) and is the 124-year-old program’s winningest coach.

Besides earning a Teaching Excellence Award from the UW System Board of Regents, the radio TV film department continued to add to its collection of awards and honors in 2020. The Wisconsin Broadcasters Association handed UWO students 10 production awards in Middleton in early March.

Three Titans earned the WiSys Carl E. Gulbrandsen Innovator of the Year award, recognizing them for exemplary contributions to Wisconsin innovation. Senior Jessica Tarter, senior Parker Schmidt and Macall Hill, ‘19, teamed up on a project centered around a product designed to improve survival of honey bee colonies in cold weather.