UWO’s Alabed twins closing out wrestling career the only way imaginable: together 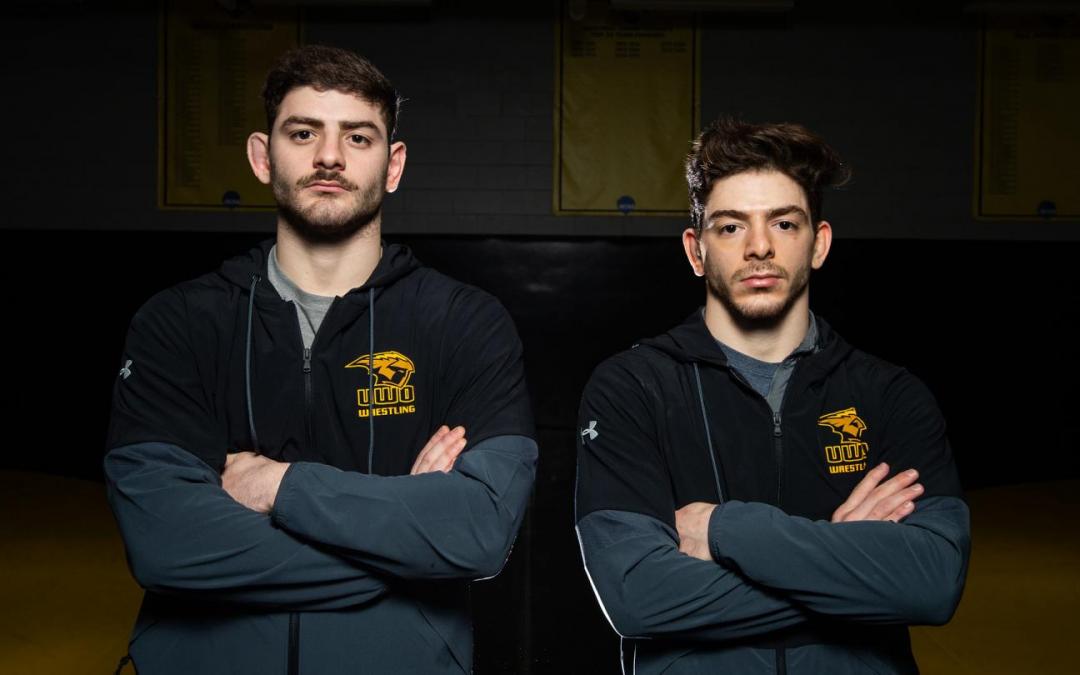 There isn’t a lot of wrestling on bare concrete for Husam and Wesam Alabed these days.

The 23-year-old twin brothers first found both a love and talent for grappling as youngsters growing up in the Syrian capital of Damascus. Around the age of 10 they’d round up fellow kids from the neighborhood, including their two older brothers, and the group would challenge each other. Maybe it’s a stretch to call it wrestling—youthful roughhousing might be more like it—but the kids would try to take each other down, much the same way the Alabeds have done over their five-year journey with the University of Wisconsin Oshkosh wrestling team.

These one-on-one contests to be crowned king of the takedown would begin on the lawn near the apartment building Husam and Wesam lived in. Grass makes for a soft landing, at least at that age.

But sometimes soft landings were out of the question.

“We had this little area, kind of like a playground area, and it had grass—but we weren’t allowed to step on the flowers and stuff, so whenever we’d get yelled at, we’d wrestle on the concrete,” said Husam, who along with Wesam is working his way through a condensed senior season because of the pandemic.

“I wouldn’t say it was the best idea. We got hurt sometimes, but we were just kids having fun. … It was a little rough but nothing serious.” 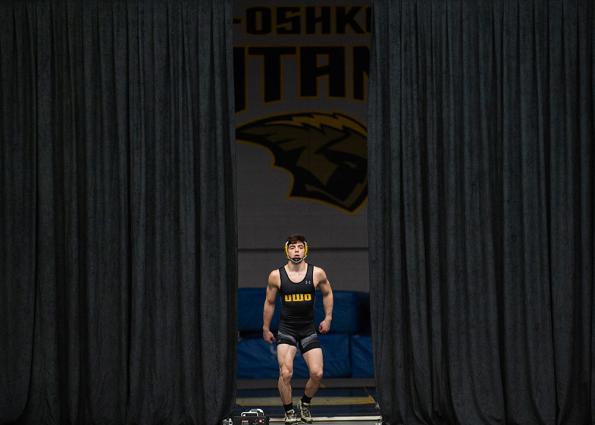 Wesam Alabed has high hopes for this senior season.

The future laid out

It would take time, but serious is exactly how the Alabeds would get about the sport. Though born in the United States, they’d live in their parents’ home country of Syria from about age 5 to just before ninth grade. It was at East Leyden High School in Franklin Park, Illinois, where those physical talents, first explored on the other side of the world, would be translated into something more meaningful.

“We had a physical education class and we had a wrestling unit,” Wesam remembered about his freshman year. “We were doing King of the Mat or something, and we’re taking everyone down. The teacher came up to us and was like, ‘You guys have to try out for wrestling.’”

Already with a love for that kind of physicality, both brothers said OK. And their lives would be forever changed for it.

“I remember just seeing they were so smart,” said Mike Fumagalli, who coached them for four years at East Leyden. “They are quiet boys but they’re really sharp and you can show them something and they catch on really, really fast.

“That was followed by being struck by their work ethic. These guys, man, I spent more time around them in four years than just about anybody else because they did every single thing that they needed to.”

Wesam would go on to qualify for the state tournament his senior year and Husam represented Illinois at the Junior National Championships in Fargo, North Dakota. Both are accomplishments Fumagalli said many wrestlers work years and years toward but don’t reach.

“They were workout-aholics,” he said. “Wesam, especially senior year, he was a monster 126-pounder. He was jacked to the max. Husam even more so—people would look at him and say ‘How in the heck is that kid making 160 or 170?’ because they just worked out all the time. They trained hard. Everything was about getting better.”

UW Oshkosh wrestling head coach Efrain Ayala was in Illinois for the state tournament during their senior year. He had his eye on Wesam and, through talking with Fumagalli, learned there was a Husam in the picture too.

Ayala remembered being told both were “very green” to the sport. With just four years of experience, they were often competing with kids who’d been on the mat since kindergarten. They’re the “diamond in the rough type of recruits,” Ayala was told.

He was all in. 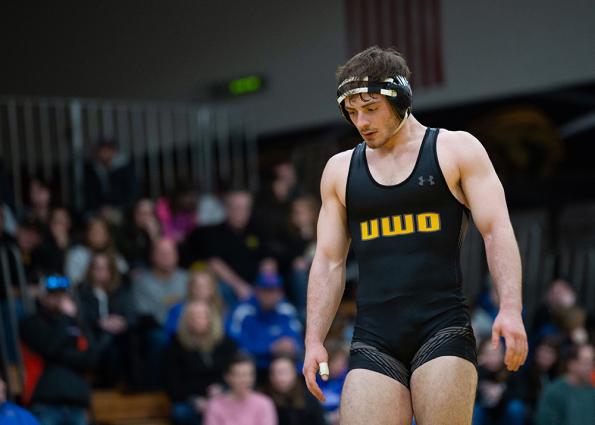 Husam Alabed, along with his twin brother Wesam, was called a “workout-aholic” by his high school coach.

The size and location of the school, the educational opportunities, beauty of the campus and the high hopes Ayala had for the wrestling program all combined to bring the brothers to Oshkosh.

A hiccup at the start for Wesam—an issue with ESL credits from high school not qualifying him for UWO—led to Husam wrestling as a freshman, while Wesam spent his fall semester at Fox Valley Technical College before transferring in the spring. Their wrestling careers wouldn’t sync up again until 2020, when Husam opted to take the year off so the two could have their senior seasons together.

In the early goings of the 2021 season—a campaign crammed into about three weeks, as opposed to the traditional October-to-March run—Husam is 2-1 and Wesam is 2-2. The Wisconsin Intercollegiate Athletic Conference Championship has been canceled, meaning neither Alabed will get a shot at topping their previous finishes; Husam finished sixth at 174 pounds as a sophomore and Wesam third at 141 pounds his first year.

“What they have been able to accomplish in the period of time that they have is really, really unprecedented,” Fumagalli said. “I think anybody outside of the wrestling community would have a really difficult time conceptualizing the magnitude of their accomplishments in the time period they’ve been wrestling.”

Records aside, over their five years in the program the tandem has progressed from wide-eyed underclassmen to genuine leaders. They’re a perfect fit in a program with a culture often described as familial. It’s something their high school coach saw coming years ago.

“When I talked to Coach Ayalah, I said ‘Listen, I guarantee you these are the kids you are looking for,’” Fumagalli said. “’They’re going to do amazing things for you, man. Even if they never win a national title or achieve All-American status, these are kids you want around your program.’”

“The greatest gift I could give a college coach was these two kids,” he said.

“They have gone above and beyond,” Ayala said. “It’s great to have them both in the room. … They‘re one of my first recruiting classes so they’ve been through the whole process with me and they understand our philosophy and our vision and what we’re trying to accomplish here. They’ve seen the things we’ve had to do to build up the program from when I first got here.

“They see and appreciate that and know how far we’ve come.” 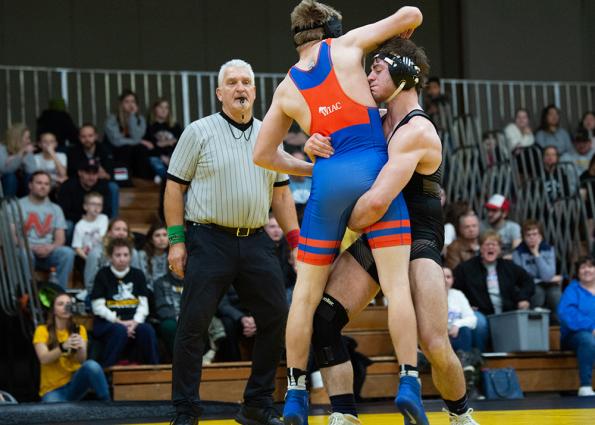 Husam Alabed has a career record of 19-41, with seven pins at UWO.

While twins, neither their looks nor personalities are identical. Wesam, at 5-foot-6, wrestles at 149, while Husam is 5-foot-10 and wrestles at 174. (“I was born with the height and I eat more now,” Husam joked.) Wesam is the more talkative one, Husam a little more reserved. Wesam’s studying information systems while Husam’s major is marketing.

Not only do they coach each other during matches, they’re able to do is with what’s almost like a secret language—at least here in the states. They’ll use Arabic, just like their days back on the concrete walkway in Syria, to communicate. Opponents are left without a clue.

“When you’re wrestling there’s so many noises coming at you,” Wesam said. “Speaking Arabic, it sticks out so I’m able to comprehend while I’m wrestling.”

Their differences in personality is similar to their styles on the mat. Wesam is described as always on the attack, while Husam said he likes to be more relaxed, “slicker and smoother.”

“I think we both need a little from each other’s playbook,” Wesam said. “I think I need to chill out and relax from time to time. I think he needs to step on the gas pedal.”

As Fumagalli said: Everything about getting better. 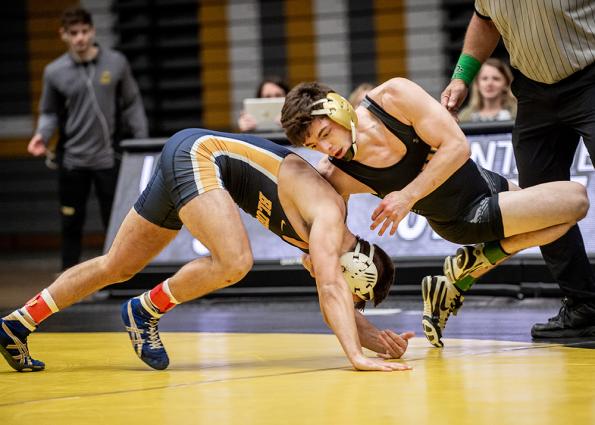 The brothers will graduate this year and plan to move to Texas to be with one of their older brothers. Besides wrestling, they’re both passionate about mixed martial arts will continue training and fighting. They haven’t yet pinned down a professional path, but their UWO degrees will provide plenty of options.

Whatever comes next, they’re enjoying the last weeks of a collegiate wrestling experience the only way they know how: total focus and dedication. While having two older brothers into bodybuilding didn’t hurt—yeah, there’s no shortage of muscles among the Alabed boys—it was a mindset laid out by Fumagalli and carried on by Ayala that helped carry them through.

“Living life without separation” is what Fumagalli calls it. It means there’s no difference in the effort somebody puts in one area of their life versus another, whether it be diet, exercise, sleep, family, schoolwork, you name it.

It’s what separates Husam and Wesam from so many of their peers—that commitment in all aspects of their life. They’re able to ignore distractions, independently take care of all the work at hand and stay on course.

Now, as their college careers near their end, the rest of their life is straight ahead.

“They’ve made this whole plan—we’re going to both wrestle in high school, we’re both going to go to this college, both graduate at the same time, both start a new life in the same city,” Ayala said. “Everything they’ve had to go through, from trying to learn a new language and being in a new country, to going to a different state for college, they’ve went through together and had each other for support.”