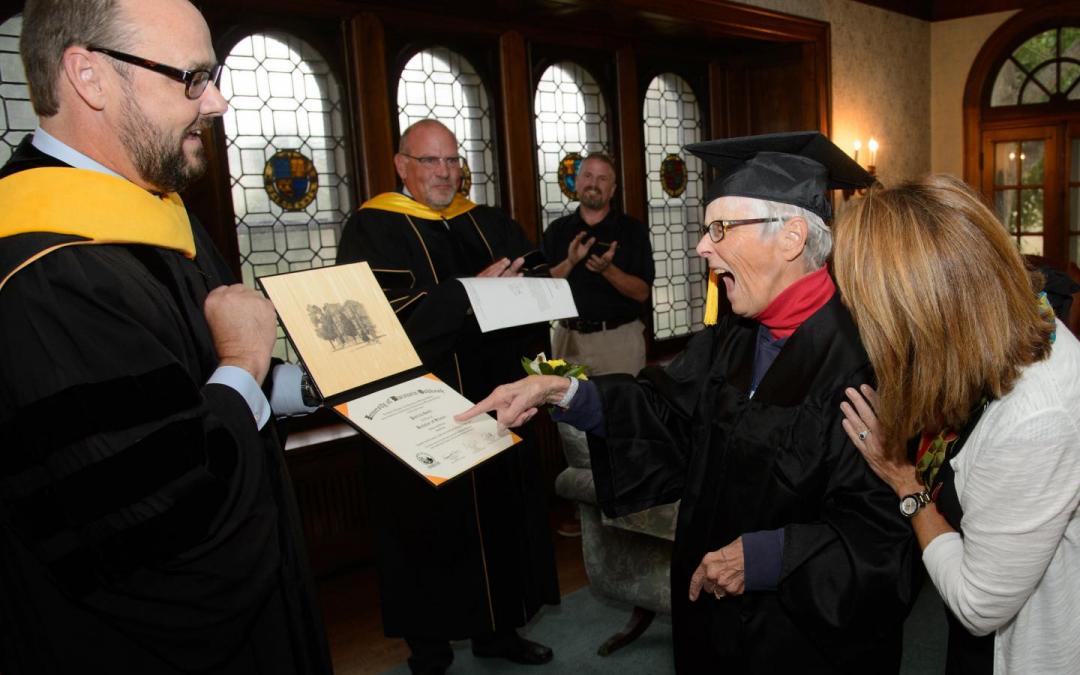 A beloved student and classmate, and a local celebrity in 2015 after graduating from the University of Wisconsin Oshkosh at the age of 80, has died.

Patricia “Pat” Anne Goetz, 85, passed away on Sunday on the feast of St. Valentine and “day of boundless love,” according to her obituary, which says she undoubtedly is writing a vivid devotional poem in Heaven.

Goetz was a self-described tomboy, known for her trademark ball cap and hoodie. She had a variety of interests, including baking, exploring and hiking, sewing, reading, writing poetry, watching movies and playing piano. An avid seamstress, she created her own apron brand called Pioneer Aprons.

“Becoming a mother and creating a home for her children brought Pat deep satisfaction,” according to her obit. “Tales of raising a family dominated much of her storytelling later in life.”

In 1986, Goetz graduated with a registered nursing degree from St. Luke’s School of Nursing in Racine.

More than 20 years later, in 2009, Goetz returned to college and pursued her greatest passion—writing.

In 2015, she earned a bachelor’s degree in English from UW Oshkosh and was recognized as the oldest student on record to earn a degree from the institution.

“Teaching someone like Pat, who was 75 when she first enrolled in one of my courses and 85 the last time she attended one of my courses, is inspiring and restorative for traditional students as well as for teachers stuck in ruts,” said Baker, who continued her close friendship with Goetz over the years. “Pat had always called me her ‘teacher,’ never her professor, which I preferred. I’ve got nothing to profess, just thoughts to share, nurturing to provide. Pat got this about me.”

Baker said her octogenarian student demonstrated many life skills and truly cared about her classmates.

She kept up with popular culture to the surprise of her much younger fellow students and wasn’t afraid to ask Baker to repeat herself if she didn’t hear a portion of the lecture, ask other students for help, or to assert herself in discussions. She engaged in course material honestly, authentically and passionately—a great model for younger students.

“Pat truly cared about her classmates, which always helped me to foster close-knit writing communities,” Baker recalled. “Nobody wanted to disappoint Pat!”

Baker said Goetz was “funny until the very end,” demonstrating the link between humor, survival and longevity.

In lieu of flowers, memorial donations may be sent to establish a scholarship in her name for an up-and-coming writer in the UWO English department. Anyone wishing to donate should notate Pat Goetz Memorial UWO Scholarship on the donation and mail it to Mary Mattioda at 4017 Harbor Chapel, Kingsport, TN 37664.