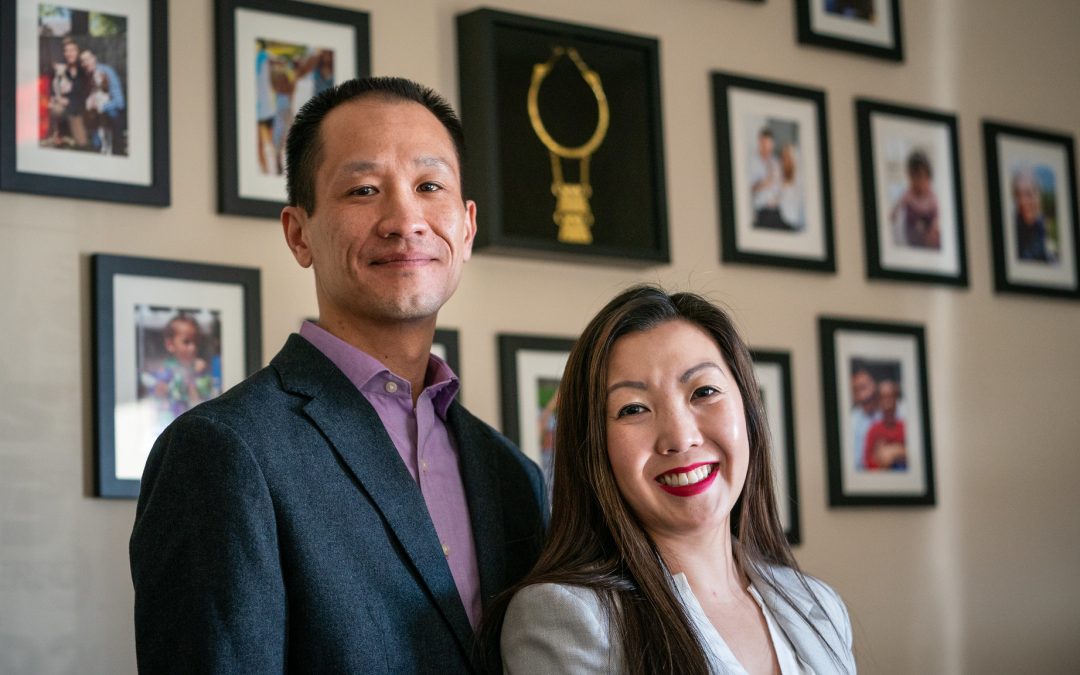 A year and a half ago Kou and Sheng Lee Yang took a leap of faith.

The University of Wisconsin Oshkosh alumni and married couple had each spent about a decade following a traditional career path in northeast Wisconsin. Kou, a 2009 accounting grad, climbed from rung to rung on the corporate ladder at two global corporations, most recently Kimberly-Clark Corp. Sheng, who graduated with a criminal justice degree in 2010, went on to earn a master’s in clinical social work and work for Outagamie County, then a startup behavioral health clinic. She joined the UW-Green Bay faculty in 2018.

For all they’d accomplished and all they’d earned, neither was fully satisfied. Time and again, Sheng would come home from a day of work and explain to Kou how, for one reason or another, mental health services were just not accessible to parts of the population. She pushed changes in policy and procedures, but found little success.

Years would pass and the same conversations would repeat.

“We finally said it’s going to be super hard to change policy, especially in established organizations, so we decided to lead that change and be the change,” Kou said. “We figured it would be easier than trying to change from within.”

In September 2019, Sheng, with her leadership experience in social work and healthcare, and Kou with his business acumen, launched the nonprofit Us 2 Behavioral Health Care. The approach for the Appleton clinic is described as two-pronged: First, Us 2 provides culturally sensitive mental health services for those who need it. Second, the organization is helping to educate and train others—both individuals and organizations—to be more inclusive.

The ultimate goal, as Kou put it simply, is to create equity in healthcare.

“What that means is when somebody comes to our office for services, whether they’re a multimillionaire or if they’re a client who is on Wisconsin state BadgerCare (insurance), one should not be prioritized over the other,” he said. “They should have equal access to our services.”

While Sheng remains at UWGB teaching mostly graduate-level courses in the social work department, she’s now the Us 2 executive director. Kou left behind his previous career and carries the title of director of operations and finance. On Day 1 with the nonprofit, it was the two of them sitting in a one-room therapy office with a couch and their personal computers. A year and a half later they have a staff of about 10, with four hires coming in the next few months. They’ve upgraded offices twice and have an expansion grant in the works—before long Kou said they plan to have a 14-room office with two large conference rooms.

“We have grown tremendously,” Sheng said. “When Kou and I started incubating this idea, it seemed so radical just because people are used to doing things the same way day in and day out.”

The ability to expand is a testament to the need for cultural humility in mental health services. Marginalized groups have been searching for an organization that is inclusive and that can meet their needs, Sheng said, and it’s only been made more apparent during the pandemic.

Kou was born in Chicago and spent much of his childhood living in Two Rivers. A first-generation college student, he’s the son of refugees who left Laos after the Vietnam War. After a year at UW-Whitewater, he came to Oshkosh to be closer to family and friends and because of the strength of the University’s accounting program.

Sheng was born in Thailand and was about 2 when her family moved to Wisconsin. She grew up in the Fox Cities and graduated from UWO with a criminal justice degree in 2010. She went on to earn a master’s degree in clinical social work from UW-Madison.

The pairing of their areas of expertise helped give them confidence Us 2 could work. A boost came in the early days when they received buy-in from the Community Foundation for the Fox Valley Region—after the Yangs pitched their idea, grant money started to roll in. It was a sign they weren’t the only ones recognizing the needs of the community.

“We had confidence in ourselves and our ability to deliver a compelling message,” Kou said. “That’s really what it’s about, right? We go to school for a long time, learn these basic skills, but at the end of the day the one thing I learned most out of being in business is delivering a compelling message. We thought we could do that.”

The two-pronged approach continues to thrive. They’ve continued to add therapists with a variety of skillsets and backgrounds, including two recent additions who focus heavily on the LGBTQIA+ community. Us 2 also has helped train more than 1,200 professionals across the state, part of the plan to constantly grow and export talent.

In such a short time, the Yangs have seen many people in the Fox Valley—and, thanks to telehealth and the use of other technology, clients as far away as Eau Claire, Madison and Milwaukee—get much-needed help. That’s always the main goal. But the Yangs themselves also have found something they didn’t have access to elsewhere.

“I feel more fulfilled,” Kou said. ” … You get to a point in your career where you’re like, ‘Do I really want to chase that salary? Is it really going to make me happier?’

“I was searching for something more fulfilling than the dollar and this is what I found.”