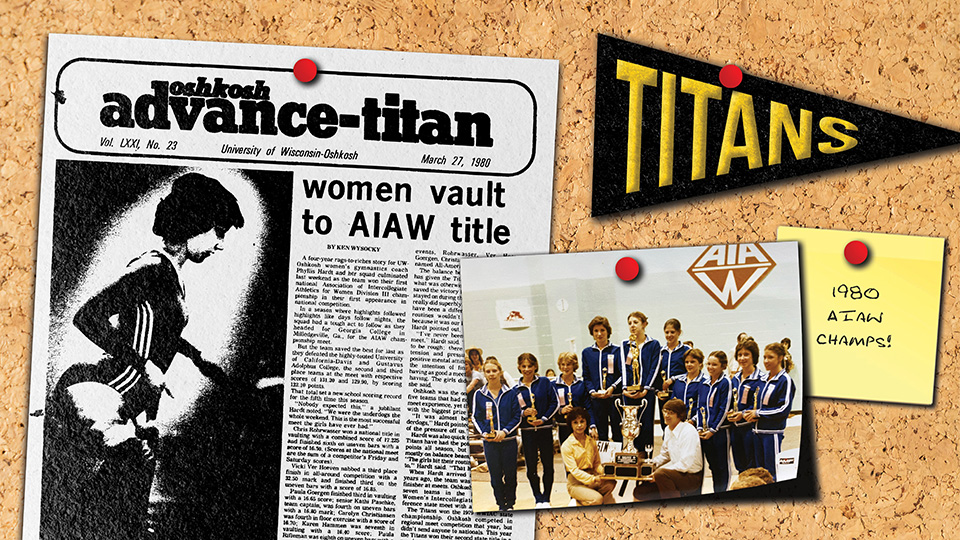 While the University of Wisconsin Oshkosh women’s gymnastics team broke both records and barriers during the 1980 season, there’s one particular smash Carolyn (Christiansen) Destache ’83, remembers most.

No. It was the ecstatic shattering of head coach Phyllis Hardt’s dreaded scale.

“We used to do weigh-ins,” remembered Destache, one of five Titans to earn All-America honors that season and a 2003 UWO Hall of Fame inductee. “We used to weigh in every week. We’d walk down to her office and she had this black scale—it was like the doom of walking to this scale. That was the ritual.

“When we went to Georgia for the national championship she brought the black scale. So we won and we went back to the hotel and the whole team stole the black scale and we went out into the parking lot and threw it up in the air and watched it shatter into a million pieces.”

It was March 22, 1980 when the weigh-ins—at least for that season—were over. The UWO gymnasts had won a national championship, something no other women’s conference program in any sport had done. UWO edged the University of California, Davis by nine-tenths of a point to win the Association of Intercollegiate Athletics for Women (AIAW) Division III national title at Georgia College in Milledgeville, Georgia. 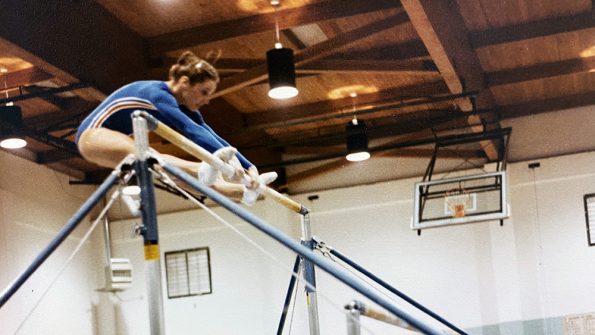 Freshman Vicki Ver Hoeven was one of several first- and second-year athletes making major contributions in 1980.

Helen Briwa was UWO’s first women’s director of athletics during that time, a position she held through most of the 1970s and ’80s. She also coached five sports during her tenure and saw the gymnastics program expand the range of possibilities for women’s athletics at UWO.

“It gave them a big shot in the arm,” said Briwa, a 2006 UWO Hall of Fame inductee who helped form the then-called Wisconsin Women’s Intercollegiate Athletic Conference (WWIAC) in 1971. “The women were pioneers.”

“Our team’s motto is ‘tradition driven,’ so we are constantly talking about our past successes and the road that was created by former Titans that paves the way for our future succceses,” said Lauren Karnitz  ’06, ’12 MSE, gymnastics head coach since 2008—and a former UWO gymnast herself. “With the 1980 team and all the team and individual success since, a winning culture was created around the sport of gymnastics and with that an expectation that we strive every season to uphold.”

If it was celebrated at the time as significant for women’s athletics at the University or for the conference, it wasn’t widely known among the team.

“I don’t remember knowing it was the first,” said Paula (Goergen) Mandel ’83, another of the Titans’ All-Americans in 1980. “All I know is we were underdogs, not expected to do anything and it was a huge deal that we won.” 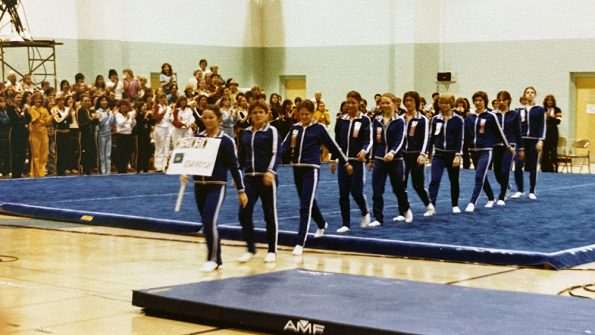 The UWO women’s gymnastics team—on the verge of making history—together at the 1980 nationals opening ceremony in Milledgeville, Georgia.

Part of the reason the Titans saw themselves as underdogs was their youth and inexperience. They were a young team, starting off the year with 10 out of 12 athletes either in their first or second year. And when it was all said and done, they were the only team among the top five finishers to not have national meet experience.

“Nobody expected this,” Hardt told the Advance-Titan at the time. “We were the underdogs the whole weekend. This is the most successful meet the girls have ever had.”

It was the most successful in the sense it secured them a championship, but also in the sense that the 132.10 points established a new school scoring record for the fifth time that season. The Titans were led by freshman Chris Rohrwasser, who won the national title on the vault and finished sixth on uneven bars. Freshman Vicki Ver Hoeven finished third in both the all-around and uneven bars competition. Mandel was third on the vault and Destache fourth in the floor exercise and, again, both were freshmen. Senior Kathi Paschke earned All-America mention with her sixth-place finish on the uneven bars.

While clearly stuffed with first-year talent, the 1980 team was also coming off UWO’s first-ever WWIAC championship in any sport in 1979. Before nationals they repeated as WWIAC champions and the program would go on to win a remarkable 12 conference titles in 14 years. 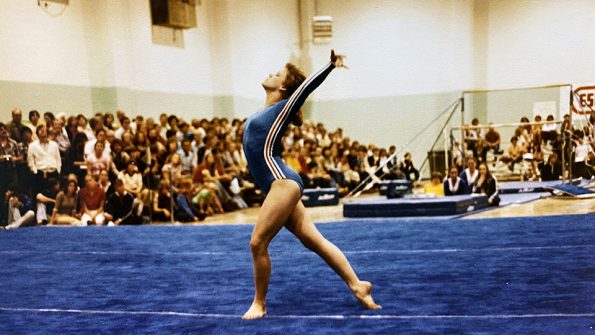 Carolyn (Christiansen) Destache, a freshman in 1980, was inducted into the UWO Hall of Fame in 2003.

Leading that stretch of dominance was Hardt, who coached the Titans from 1977 to 1992. The 1999 UWO Hall of Fame inductee guided the team to national titles again in 1986 and 1989. That first title came in her fourth year at the helm in what was called at the time a “rags-to-riches story.” And from then on her tenure was far more riches—meaning victories, accolades and championships—than rags.

Besides the national and conference titles, she earned eight coach-of-the-year honors from various conferences as they evolved. She also helped athletes win 12 national and 49 WWIAC event championships. Hardt is truly one of the titans of athletics in the University’s 150-year history.

“She was a hard driver,” Destache recalled. “She would push you to your limits. I remember at one point I went back to my dorm room and I could barely lay down or sit up because we did I don’t know how many sit-ups or leg-ups or whatever we did.”

“I was scared to death of her,” Mandel said. “She was pretty intense and intimidating.”

“I don’t think we would have made it as far as we went without Phyllis and Dale,” she said. “They were a team that was unstoppable.” 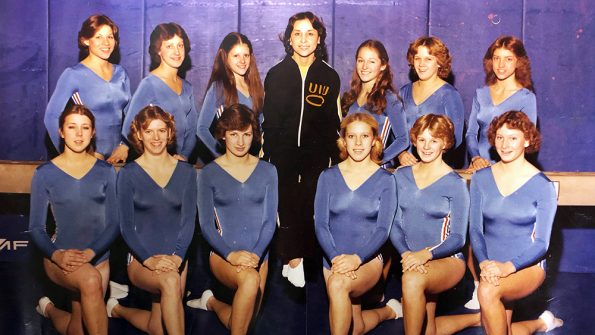 It might be understandable that after more than 40 years, it’s the memories of friendship and laughs and experiences that endure, not the individual meets or the stat sheets.

“I just remember all the fun, all the stuff we did in the gym, our teammates,” Destache said. “We spent a lot of time in that gym and I just remember the moments we had laughing together.”

The squad wasn’t one of rivalries or cliques. They jelled early on and while there was a little bit of roster turnover as the year wore on and, of course, peaked at the perfect time.

“Winning this means an awful lot to the girls,” Phyllis Hardt said at the time. “Their team spirit has really made this team something special.”

For Mandel, the season was unforgettable for another reason: It was her last year competing in gymnastics. Less than a month later, she suffered a severe knee injury that spelled the end of her career.

“It’s one of my most proud moments and memories,” she said. “I think that is why the memory of that year is so vivid is because it was my last year competing. It was a lot of fun.”

Still, there are some snapshots from the competition that remain front of mind. There’s one moment in particular from the weekend in the small Georgia gym Destache can still see: As the meet came to an end and scores were being tallied, the Titans saw the team from UC Davis believing they had finished first.

“I think their coach had told them they won and we were kind of like, ‘Oh man, really?” she said. “And I remember Phyllis, she did her own figuring and she must have figured out that we had won. She just walked by us and she held up the number one. I don’t know why I remember that moment but we all just kind of went crazy. ‘Oh my god, it’s not possible.’

“It was a very defining moment. We just all looked at her. She just knew—she knew she had it right.”