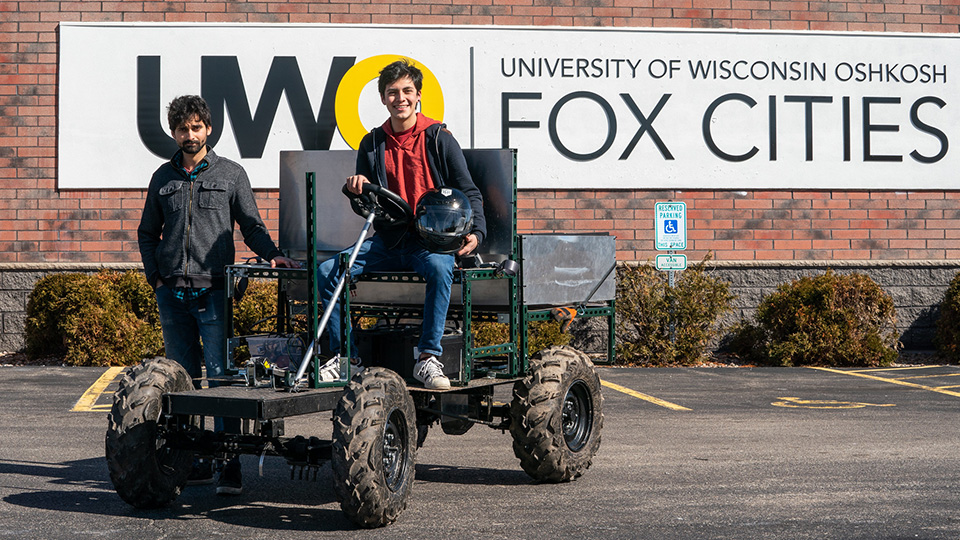 Since 2018, students on the Fox Cities campus of the University of Wisconsin Oshkosh have been designing, building, adjusting and improving an electric basic utility vehicle, or BUV. It’s an always-evolving project giving those involved opportunities to work on a wide variety of skills, including engineering and technology.

The project is steered by Warren Vaz, an assistant engineering professor in his fifth year at the Fox Cities campus. It’s an idea he brought with him from his days as a doctoral student about a decade ago at the Missouri University of Science and Technology. He took the framework of a project undergraduate students were working on there and retooled it for UW Oshkosh students.

“I thought this would be a great project to help our students learn about vehicles, learn about clean energy, get some skills in machining, design,” Vaz said. “Then of course get some experience working together as a group, testing their project and then presenting it ultimately.”

As its name indicates, the BUV is basic, it serves a utilitarian purpose and, of course, is a vehicle. It’s basic in the sense it’s designed to theoretically be produced for less than $5,000. (“No frills, bells or whistles,” Vas said.) It’s a utility in the sense it features a bed for hauling materials. And it’s a vehicle—designed to move from Point A to Point B.

All that said, creating the BUV was far from elementary. Vaz said since it began in 2018 maybe a dozen or so students have had a hand in the project, including some from the Oshkosh campus, UW-Platteville and elsewhere. Despite that timeframe, the vehicle has only been drivable for about a year. A lot of research has gone into planning, plus—as those involved can attest—what seems like endless troubleshooting.

Adeel Sultan, a senior mechanical engineering major from Appleton, said troubleshooting has been a major part of his involvement, especially when work resumed after the BUV sat untouched for months early in the pandemic. That’s part of the charm—and challenge—of a no-frills creation. 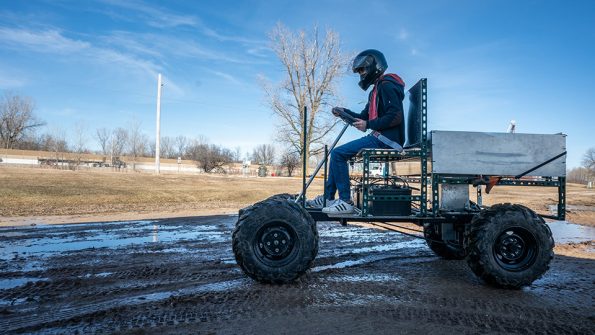 Because he came into the project after the BUV was already built, Sultan said he felt like in some ways he was learning about it in reverse order compared to those involved in past semesters. He figured out how everything worked one system or piece at a time while trying to problem solve.

“I feel like in normal classes your workload is really cut out for you,” he said. “You have a syllabus and assignments and due dates. … Here it’s like, all right, there’s a problem, we don’t know how to fix it, let’s figure it out. That’s been challenging but super rewarding.”

Francisco Isaac Solares Hertewing is a sophomore mechanical engineering major from Mexico City, Mexico. He’s had fun with the project this semester because of his love for hands-on learning.

“I just love everything: touching, wiring, designing,” he said. “All of that is super cool.”

Duties Solares Hertewing has been involved with in recent weeks include programming a laptop that will someday be mounted for the BUV driver to see. The screen will feed information to the driver, including speed, remaining battery power and the outside temperature. He’s also helped with a set of solar panels that will be  stored under the bed, then taken out when the vehicle is at a worksite and used to add extra juice to the battery.

Broadly speaking, this type of BUV would be produced and used by people in countries low on money and resources. The low-cost vehicle could be used for farming, landscaping, transportation and more. It’s made to be adaptable, so it easily can be adjusted for different power sources or other accommodations. 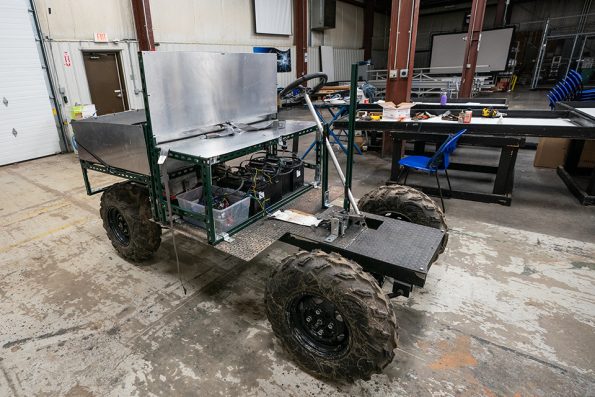 The BUV project gives students a variety of ways to work on their engineering and tech skills.

Students used a golf cart as a guide of sorts when designing the BUV. They went with an 8-foot by 4-foot footprint so it could operate both indoors and outside. Its four batteries are carried onboard and under the bench for center-of-gravity purposes.

Vaz said it’s expected to go about 25 mph and have a payload capacity of 500 pounds. With the current battery setup, it likely would have a traveling range of about 40 miles.

All of this can change, of course, as different ideas emerge or problems arise. As an always-evolving project, the goal isn’t to complete the BUV and then be done with it.

“I guess you could say the cliché that research leads to more research,'” Vaz said. “The whole idea for this BUV project is it’s supposed to be with no end in sight. Every semester or every year, whoever wants to work on it, we find something new.”

Top photo: Adeel Sultan, left, and Francisco Isaac Solares Hertewing are among a handful of students on the Fox Cities campus who’ve worked on building and running an electric basic utility vehicle.