After missing a year of the National Model United Nations (NMUN) Competition due to the pandemic, the University of Wisconsin Oshkosh Model UN (MUN) team again brought home the top award, showing the drive and success of the team hasn’t skipped a beat. This year with only 15 students, the MUN team represented only one country for the first time since 2010, proving that while having small numbers this year, they are as mighty as ever.

The NMUN Competition was held April 5-8 on the virtual MUN platform Gatherly, where delegates from around the world formed virtual groups to negotiate issues ranging from the socio-economic effects of global pandemics to peaceful uses of nuclear energy. The team represented Benin, a country in Western Africa. Through research, UW Oshkosh delegates focused on key national priorities, regional issues and ideas that could promote development for Benin and other developing countries.

Receiving the highest honor at the conference, Outstanding Delegation, the UWO team was recognized for excellence in negotiation, diplomacy and representing Benin’s national priorities accurately. Additionally, half of the UWO delegates won the peer award, voted on by fellow students competing and awarded to a delegation that has displayed inclusive leadership, expertise and a positive attitude throughout committee sessions.

“This virtual year presented its challenges not only due to hosting meetings and competitions online, but also combined with a team in which half had never participated in an NMUN Competition,” said Coleman Korb, UWO MUN team president. “These two factors created a unique confluence of events addressed through team leadership and strategy.” 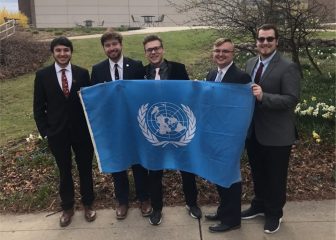 With these challenges highlighted, Korb recognized the key contributions of Robert Clancy from the UWO IT department.

“Without Rob working down to the wire to address technical difficulties and provide access to areas on campus where delegates could compete, the team would surely not have been successful” he said.

He also noted alumni Josey Strand and Matthew Clowney for taking time to help coordinate  competitions and assist the team leadership in guiding such a young team to success.

Fifth year MUN student Zoë Dahse noted the leadership skills of Korb: “In a year where everything was different and so many obstacles needed to be overcome, our team would not have achieved anything without the positive attitude and togetherness that Coleman displayed.”

To close the chapter on the UWO MUN team’s 37th year, Korb said, “I am proud of how our entire team came together to overcome these challenges and continue the tradition of excellence into another year’s victory.”

The team’s honors are as follows: