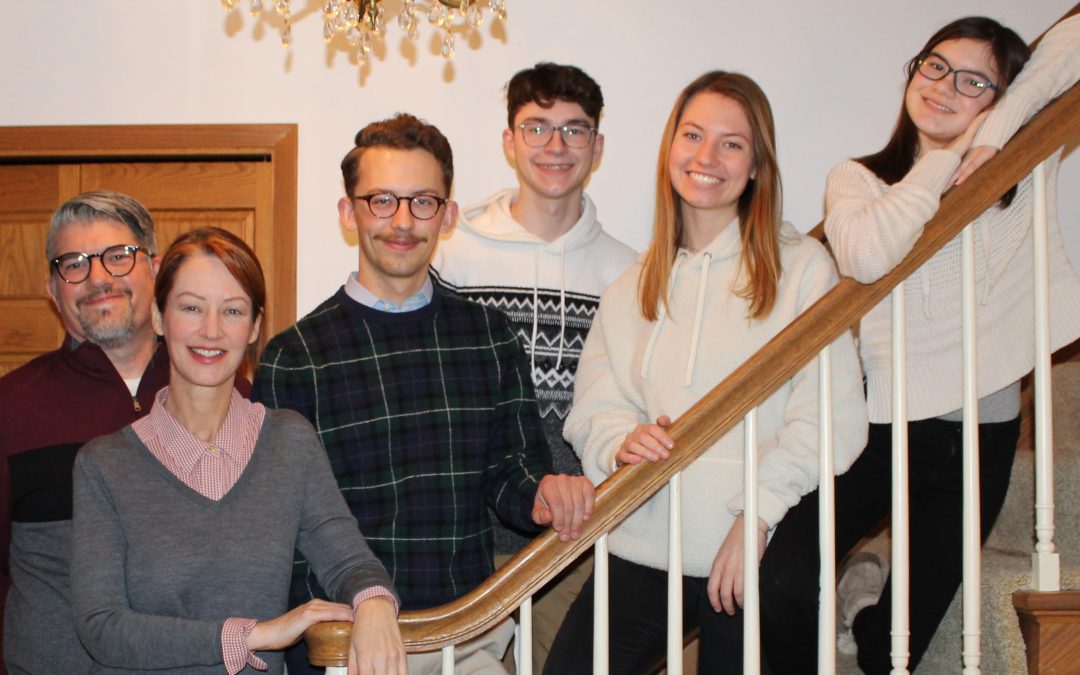 The University of Wisconsin Oshkosh has seen its fair share of familial connections over its 150 years. There’ve been multiple generations who’ve earned degrees, siblings who’ve celebrated commencement on the same stage and countless couples who’ve matched up on campus and married before or after becoming proud UW Oshkosh alumni.

There are those fun but common family connections—and then there’s the family of Heather McCombs and Mick Rutz.

As McCombs, a sustainable management lecturer at UWO, put it: Their situation gives credence to the age-old phrase “truth is stranger than fiction.”

For starters, McCombs is married to Rutz, a professor and history department chair, and the family lives in Appleton.

James Dean “JD” Parnau, a senior secondary education major, is McCombs’ son and Rutz’s stepson. Parnau is on track to graduate next fall after a semester of student teaching. In this spring semester he’s in clinicals, meaning a good chunk of his day is spent alongside a classroom teacher—and in his case it’s a sixth-grade class at Perry Tipler Middle School in Oshkosh. 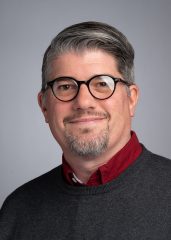 Maybe not every 12-year-old would be excited about her step-brother stepping into her classroom, but Parnau said he’s positive Sage enjoys it. He enjoys it too, even though he hopes to someday teach in a high school, not middle school. The sixth-grade class isn’t as hectic as he’d thought going in, he said.

“They’re great kids for the most part, they want to learn. It’s different than teaching high school but it’s a great time.”

In early May, Sage and her classmates were asked to each write a farewell letter to “Mr. Parnau” as his time at Tipler was coming to an end. She wrote to her stepbrother: “Dear JD: Thank you for teaching me. I learned a lot, and I look forward to seeing how you grow as a teacher in the future.”

A teacher and a pupil

Then there’s this: Along with his clinicals, another part of Parnau’s spring course load is a 300-level class on African history. It’s delivered via the HyFlex model, meaning part is in person and part is online. And it’s taught by Rutz, his stepfather.

“I was kind of hesitant of taking a class with him at first because I thought it’d be awkward,” Parnau said. “Honestly, it’s been super nice. It hasn’t been awkward at all. We both just act professional and don’t make a big deal about it. It’s been nice and it’s a good class too, I really enjoy it.”

Both Rutz and McCombs said the unusual situation has provided a look at a side of Parnau they’d never seen before: not son or stepson, but student.

“It has been a lot of fun to have JD in class,” Rutz said. “He has a real passion for studying history, and he is always eager to participate.” 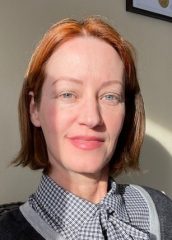 For McCombs, that look came courtesy of simply overhearing one of her husband’s virtual discussions one day. She was in the room and heard Parnau answer a question and, in that context, he sounded like a different person.

“Not the sound of his voice but the way he talked, and what he talked about,” McCombs said. “Granted African history is a new subject for JD and I’ve never heard him talk about it before but he sounded like someone I have never met before using my son’s voice. … I was the proverbial fly on the wall of a class my son was in and my husband was teaching. I have heard Mick teach many times through the pandemic, but I have never heard my son be a student. My first instinct was to text JD and say ‘great answer honey’ but I decided against it and let it go.”

The trio of Parnau, Rutz and McCombs recently began work on a project together that someday could have an impact far beyond the campus they’ve spent so much time on these past few years. McCombs, who published an exam guide textbook related to Leadership in Energy and Environmental Design (LEED) Green Associate credentials, plans to produce a book on the Vietnam War.

The idea came from recent conversations McCombs has had with her own mother. When she was young, McCombs’ father was a correspondent for the Washington Post and the family lived in southeast Asia in the early 1970s. Recent documenting of her family’s memories evolved into working with Rutz, who has a doctorate in history and has published two course readers; and Parnau, who McCombs said has studied the Vietnam War for most of his life and who has excellent map-making skills, on this new textbook.

So, in a way, with the involvement of McCombs’ mother in recounting the family’s Vietnam-era experiences, there’s yet another family member connected with work related to UWO.

And if all that wasn’t enough, there’s one more member of the family in the mix: McCombs’ daughter, Georgia Parnau, who’s finishing her first year at UWO this spring.

Needless to say it meant no shortage in resources when it came to questions about life as a Titan.

“Because most of my family is involved with UWO, it calmed a lot of nerves going into college at the beginning of this year,” Georgia said. “It’s definitely convenient if I ever have a question I can just ask someone in my family instead of making an email or a call.”

Experiencing the 2020-21 academic year and its ups and downs not just as an educator but as a parent cemented UWO as being home to one of the best college experiences around, McCombs said. On top of dealing with the pandemic, Parnau is a specialist in the National Guard and spent from last May to August working at COVID-19 testing sites. He also was called into duty multiple times in response to protests and other fits of unrest—something he’d have to bend his school schedule around with sometimes little lead time.

McCombs, from her different vantage points, saw how the University handled all the hardship—and the great leadership it took to get through the year. It made her really understand why UWO is the kind of place a parent can feel good about sending a child.

“After a few years of teaching my sustainability class in Sage Hall it dawned on me what a uniquely great place UWO is and that it would be the perfect college for my kids,” McCombs said. “To get access to first-rate professors like Mick and his colleagues, to live on a campus which prioritizes sustainability and diversity, with modern, high-end facilities all for a low price, and to have it be only a half hour away from our home was a no-brainer. Both James Dean and Georgia only applied to UWO, it was the only place they wanted to go.”