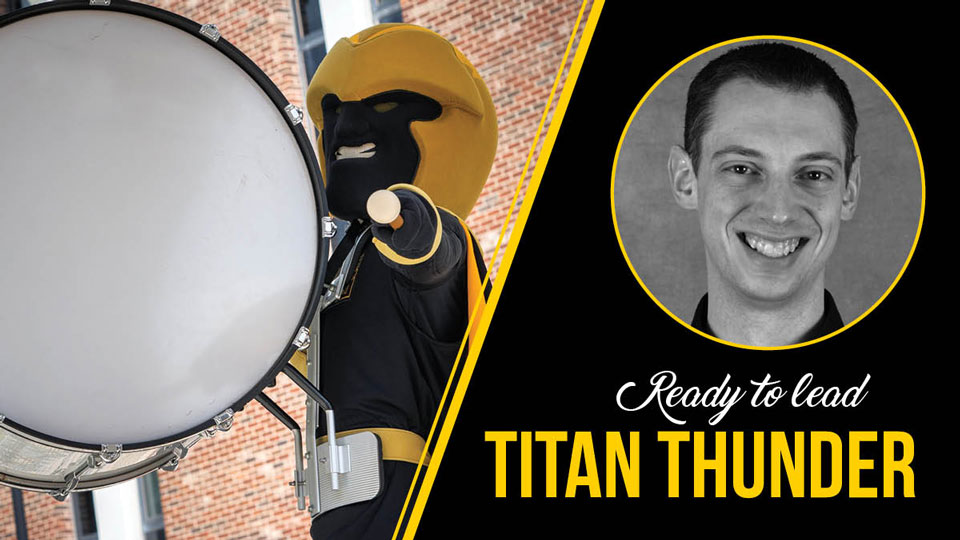 Joseph Scheivert is ready to strike up the band at the University of Wisconsin Oshkosh.

The new director of athletic bands joined UWO’s music department last week and will spend the next year developing a 100-piece marching band to debut in fall 2022.

“I am thrilled to have Dr. Joe Scheivert join us as the inaugural director of the Titan Thunder Marching Band. His experience, creativity and vision for this program’s future will ensure its fast start. He will help UWO develop a great experience for our students. A marching band has long been a missing element at UWO, and Joe is the best person to help us bring it to life,” said UWO Chancellor Andrew Leavitt.

“Dr. Scheivert is a gifted teacher and an inspiring educator who will bring great distinction to our program and the new marching band at UWO,” she said. “He will be a visionary leader for the Titan Thunder, and we all look forward to working with him in the coming years. We are proud that Joe and his family are joining the Oshkosh community!”

He earned bachelor’s and master’s degrees in music education from Pennsylvania State University. He earned a doctorate in musical arts in wind conducting from the University of Iowa in 2018, where he served as graduate teaching assistant for University Bands, conducted concert ensembles, led the Iowa Pep Band and served as a drill writer, arranger and instructor of the Hawkeye Marching Band.

His dissertation research focused on policies and procedures developed by the Big Ten Conference marching bands in response to issues such as social media use, copyright concerns and hazing.

A rare opportunity at UWO

“No one in this profession expects to start a collegiate band,” Scheivert said. “It is a rare opportunity that most people are not fully prepared for—to make something out of nothing.”

Working with “young” marching bands formed just in the last three years or so both at Kennesaw and UNC Charlotte has given Scheivert an inside perspective on what it takes to launch such a major endeavor.

Designing and ordering uniforms, purchasing instruments, choosing the music, creating the marching drills and recruiting students all need to happen ahead of taking the field to put on that first half-time show at a fall 2022 football game.

The opportunity at UW Oshkosh also drew Scheivert’s attention because much groundwork and thought has gone into starting UWO’s marching band program ahead of his hiring. There also is a high level of interest among students for the addition of this campus activity.

“The University leadership has not just come up with a neat idea but has actually set in place the resources for this project to be successful,” Scheivert said. “I’m ready to do it. I’m fully on board to take up the baton.”