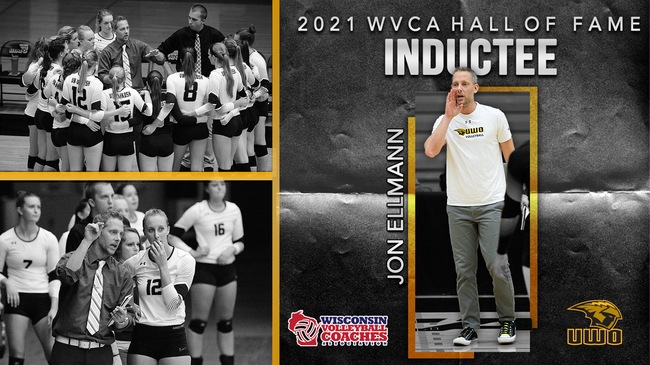 The University of Wisconsin Oshkosh head women’s volleyball coach Jon Ellmann is among 12 individuals who will be inducted into the Wisconsin Volleyball Coaches Association Hall of Fame later this summer.

Ellmann, who was named UW Oshkosh’s head coach in January 2018 after serving as the program’s interim head coach during the 2017 season, has compiled a 58-40 record during his three seasons with the Titans, including a 9-12 mark in conference play. He has coached two players to a total of three All-WIAC First Team awards.

Ellmann enters his fourth season at the helm of the UW Oshkosh women’s volleyball program in 2021 after the 2020 campaign was canceled due to the coronavirus pandemic.

Before coaching the Titans in an interim capacity, Ellmann was UW Oshkosh’s top assistant coach during the 2016 season when the program compiled a 28-8 record, earned a share of its second straight WIAC title and advanced to the NCAA Division III postseason. He assisted in all phases of the program, with emphases in game analysis, scouting, recruiting, and youth camps.

Ellmann began his coaching career with the Gibraltar High School freshman and junior varsity girls’ volleyball teams from 1999-2003 before becoming an assistant varsity coach at Lourdes Academy in 2004.

Ellmann, who served as president of the WVCA from 2011-16, is the owner of Oshkosh Camps LLC, which is dedicated to the skill development of student-athletes and the promotion of the sport of volleyball in Wisconsin.

The Gibraltar High School graduate earned his bachelor’s and master’s degrees from UW Oshkosh in 2012 and 2014, respectively. He lives in Oshkosh with his wife, Jackie; daughter, Molly; and son, Cooper.

This year marks 10 years since the inaugural WVCA Hall of Fame class was named, with 12 coaches also receiving honors back in 2012. To celebrate the WVCA Hall of Fame’s 10th Anniversary, the association’s Hall of Fame committee found it important for the first time to open considerations to current and active coaches, and those who contribute to the game. This shift can include former players, current and former officials, and friends of the game.

The 2021 Hall of Fame banquet will be flanked by the annual WVCA Coaches Clinic, which returns in-person Aug. 7-8 at the Community First Champion Center in Appleton.