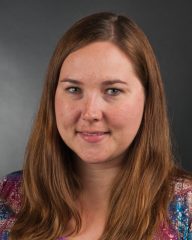 Jennifer Carter, an administrative  associate for the psychology department at the University of Wisconsin Oshkosh, has been named the July 2021 STAR Award recipient.

She was nominated by Christopher Groves, a psychology faculty member on the Oshkosh campus.

“I am more than pleased to nominate Jennifer Carter for the STAR award. Her, often invisible, support for our department and its faculty is a foundational pillar in creating the conditions needed for us to serve our students and conduct our research. While her contributions are myriad, I’ll start by describing two specific examples of her exemplary work.

“First, when I began work at UWO, I had numerous complex tasks before me including setting up my lab, creating lectures for courses I was teaching for the first time. Simultaneously, in order to get (almost anything) done, I had to learn how to navigate within the UWO system, with all its processes and affordances a mystery to me. Jenny was a stalwart, professional, and generous resource for me when it came to these tasks. She went out of her way to anticipate my needs and teach me how to go about everything from ordering textbooks and lab equipment, to requesting funding and travel accommodations. For many of these tasks, I would later learn that there was a convenient page buried in some subdirectory of the UWO website that she could have simply linked in an e-mail to me. I would have clumsily followed their instructions, but Jenny knew it would make my life easier to show me how to do it and would gladly come to my office to walk me through the process. If I had to do it again sometime in the future, but forgot how, without hesitation or annoyance, she would gladly show me again.

“Second, there are often functions that we need to access in TitanWeb or other sites that aren’t straightforward to get to and, for the sole purpose of lifting the burden off of faculty, Jenny would simply take care of the task herself. For example, we place a departmental hold on student majors’ accounts so that they have to meet with their departmental adviser each semester to have the hold lifted. Historically, we would simply give a list of the students who had met with us and she would remove their holds. Faculty would send these lists, each with a unique format, some with previously lifted students included, others with them included but not labeled, so Jenny would have to track down old documents to compare. This was a lot of work. Finally, she let us know we could remove the holds ourselves and even created a tutorial showing us how we could do it on our own. It was only then that I realized that Jenny had voluntarily been taking on this work solely to make our lives easier. We were happy to make her life easier for a change.

“Writing this nomination and identifying specific examples of Jenny’s excellence was difficult, not because examples are few, but because there are so many. Her excellence doesn’t come in the form of a select few major examples, it’s in the ocean of little things she does for us to make our lives easier. Do you have a last-minute student exam to administer outside of class? Jenny will offer to find a space and proctor it. Need to bounce an administrative idea off of someone and there aren’t any other faculty around? Jenny’s all ears. Did you forget to bring a fork from home for lunch? Jenny has you covered. Do you have a headache and have no aspirin? Of course, Jenny can help.

“In the several conversations with other faculty I’ve had while writing this letter, a clear and central theme emerged early and was repeated often: There’s so much that Jenny does for us that boiling it all down to a couple specific examples is almost painfully reductionistic. She is a deeply valued colleague and friend to everyone in this department, and I can’t think of anyone else more deserving of this award.”