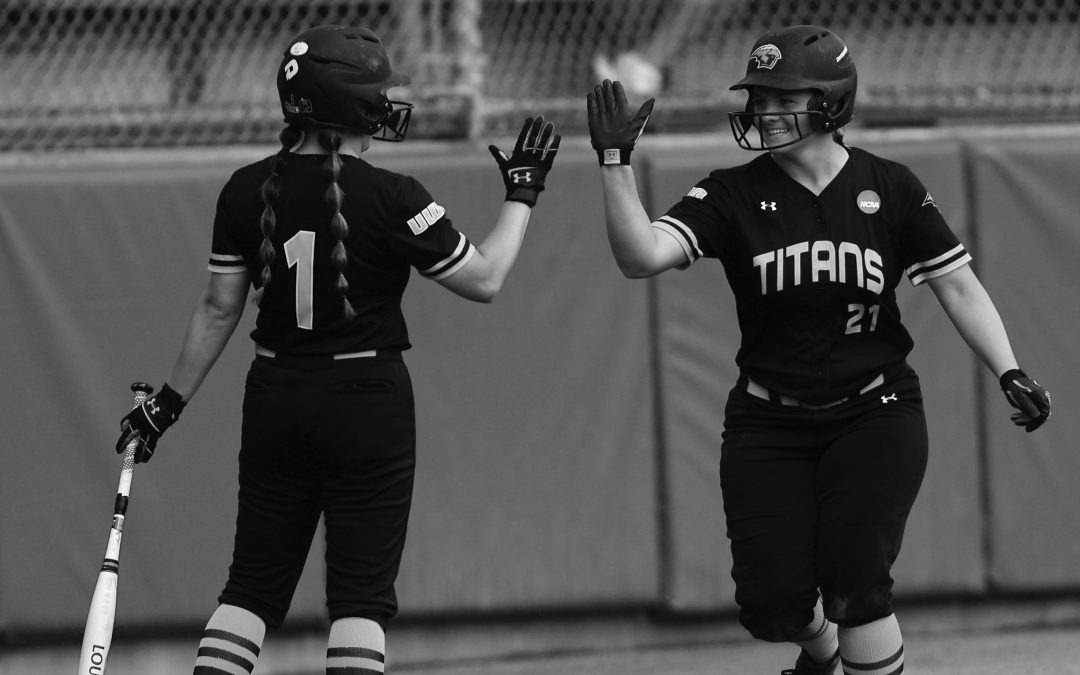 Outstanding team performances, stellar individual achievement and a return to a degree of normalcy at the University of Wisconsin Oshkosh are helping push aside disappointment from athletic seasons last year cut short by the coronavirus pandemic.

“Last year it was definitely very disappointing when I found out athletics were being shut down and we would not have an outdoor track and field season,” said Thompson, senior track and field athlete from Mercer.

Though workouts were being sent by her coach each week during the shut-down, Thompson admits it was difficult to find the motivation to practice when she had no idea if the 2020-21 season would be a reality. But she knew if she were able to compete, she wanted to give it her all—knowing it would be the final season of her throwing career. 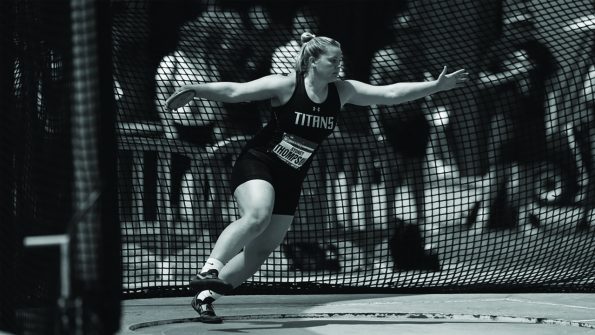 Senior Sydney Thompson won the national title in both the discus and shot put at the 2021 Division III Women’s Track and Field Championship.

The loosening of restrictions occurred just in time, as Thompson’s family learned they could attend the nationals as spectators. Her excited parents and sister drove 20-plus hours to North Carolina to take in Thompson’s last, and most significant, throws of her college career.

Titans paced by second-place finishes from Jack Flynn in the discus; Jaylen Grant in the 100-meter dash and Grant, Adrian Girone, Aaron McCarroll-Richardson and Robert Ogbuli in the 400-meter relay.

The Titans racked up 48 points during the three-day outdoor championships in Greensboro, North Carolina.

The Titans captured their first World Series game victory in program history and finished with a 1-2 record in the tournament at Salem, Virginia. The team was led by five “super-seniors”-Natalie Dillon, Natalie Dudek, Amanda Mc Ilhany, Claire Petrus and Acacia Tupa-who returned for an extra season of eligibility granted due to the pandemic.

What could have been a tough end to their careers in 2020 turned into a historic 2021. The Titans were regular season co-champions in the Wisconsin Intercollegiate Athletic Conference (WIAC) and winners of the WIAC tournament and the Division III Eau Claire Regional competition. UWO advanced to the Division III World Series and came home with a fifth-place finish.

Head coach Scott Beyer said the team stayed positive despite a sporadic practice schedule and a lot of uncertainty going into the 2021 season.

“Once we were given the green light to begin a limited practice schedule in the fall, it was very uplifting. The team was just happy to be back on the field together-even not knowing if we would have games scheduled in the spring,” Beyer recalled.

Women’s basketball made the most of a modified schedule and grabbed some serious headlines along the way.

The Titans concluded the 2021 season with a 9-2 record after securing the WIAC regular season and postseason championships. The 2021 Division III Championship was canceled due to the pandemic.

Last year, the Titans won the WIAC championship and advanced to the national Sweet 16 before the championship was canceled due to the coronavirus pandemic.

FOOTBALL, OTHER FALL SPORTS WILL BE HERE BEFORE LONG

The Titan football team lost its season in 2020 due to the pandemic, but is ready to return as strong as ever.

The Titans start their season Sept. 4 at Huntingdon College (Alabama). They travel to Northern Michigan for a Sept. 11 contest before their home opener versus UW-Platteville on Oct. 2.

“We all appreciate the opportunities we have been given these past four months-the opportunity to practice, get better and most importantly spend time with each other,” said head coach Pat Cerroni. ìWe will be ready and focused for Aug. 12 (official start of season) to do what we love to do. It won’t be long and J. J. Keller Field at Titan Stadium will be back in business.”

UWO access campus athletic programs at Fond du Lac and Fox Cities will begin in fall after they were paused for the 2020-21 academic year during the pandemic. The Falcons and the Cyclones will return in the newly formed Wisconsin Competitive Sports League, with teams from the three access campuses of UW-Green Bay and the two of UW-Stevens Point. The league will begin with men’s and women’s tennis, women’s volleyball and men’s basketball.