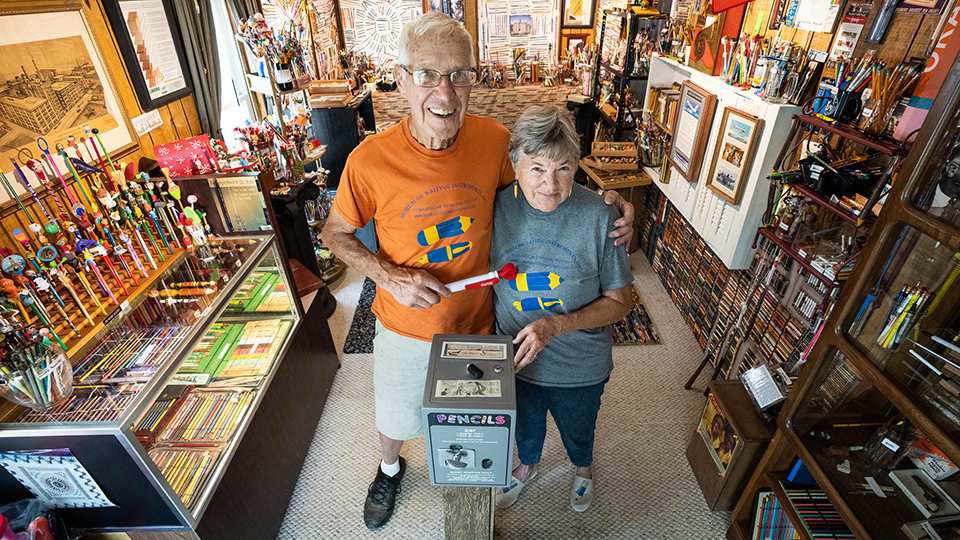 There are a number of ways the story of Karyn and Tom Schmitz can be written.

That’s about how many ways one could write just about anything when at the couple of University of Wisconsin Oshkosh alumni’s summer place—a long-standing home on the shore of Lake Winneconne that doubles as the Museum of Writing Instruments. Home to about 80,000 pens, pencils, quills and other writing tools, it’s the only museum on this side of the Atlantic dedicated to these handheld instruments.

Karyn, a native of Watertown, began collected pencils in the 1980s in part because of a great aunt who used to pick them up as souvenirs when traveling in the early 20th century. Karyn carried on the tradition, seeing pencils as inexpensive and easy-to-find keepsakes. Eventually it just became an outright collecting hobby.

The Museum of Writing Instruments (MOWI) got its start years later thanks to a granddaughter’s high school class project. The assignment involved the curation of a historical exhibit. The granddaughter came up with the museum concept—at this point the collection was a mere 3,000 utensils—but the family kept rolling with the idea, eventually letting the displays take over the ground floor of the house Karyn has lived in for more than 50 years.

If the question was something like “Should we turn our home into a museum?” the answer about eight years ago was, “Why not?” And so there is now the MOWI, a nonprofit by-appointment-only destination for tourists, history buffs, those looking for a nostalgia trip or just the generally curious.

The Schmitzes have moved to the upstairs of the home-slash-museum at 6465 Paulson Road in Winneconne—so if you want to make an appointment, they’ll be happy to pencil you in. 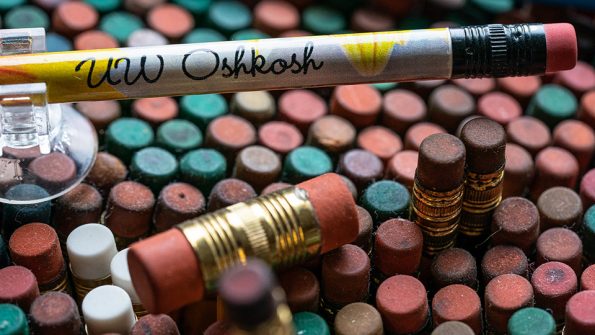 The Schmitzes have hundreds of pencils from colleges and universities—their alma mater included.

‘Pumped up with the possibilities’

Karyn and Tom came together as nontraditional students pursuing liberal studies degrees in the late 1980s at UW Oshkosh. Tom would graduate in 1989 and Karyn in 1990. Karyn had already earned a business degree from UW-Madison, but found it wasn’t helping in the way she’d hoped. Tom, meanwhile, said he wasn’t looking for a degree to open a certain door for him, professionally speaking, but it was more of a way to expand his thinking and gain new experience.

“My sister said, ‘What are you going to do with a degree at your age?'” Tom remembered. “I said, ‘Hang it on the wall.’

“I never have. But we just found that being in the BLS program and being in a college setting as adults, we really got pumped up with the possibilities of life.”

They channeled the inspiration they found in Oshkosh into a business venture in Green Lake, where tourists flock during the summer months. They opened an art and custom framing business and ran it for 15 years until retiring in 2005. That stint followed professional lives that were marked by a lot of movement and change. Tom, a native of Fond du Lac, has been a truck driver, radio announcer, worked in television, laid floors and sold cars, just to name a few. He also spent time in the Air Force. Karyn had worked as a manager at the Oshkosh Country Club and as executive assistant for the Winnebago County chapter of Arc, an organization that provides help for people with intellectual or developmental disabilities.

In retirement, they spend the warmer months in Winneconne and the rest in Texas. They have hobbies, including bike riding and traveling, but none as unusual as adding to and tinkering with their massive collection of mark-makers. 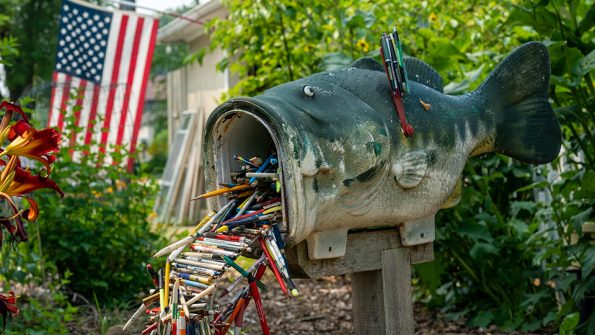 There’s no lack of creativity when it comes to how the Schmitzes decorate their museum.

Everything has a story

So just what makes up a collection of 80,000 writing instruments? You name it. There’s everything from Civil War-era bullet pencils and grease pencils to pens designed to write in space and pencils made without erasers to conserve resources for the war effort in the 1940s.

There are tourist pencils from every state, pencils made from recycled money, newspapers and blue jeans and left-handed pencils (you can think on that one).

There are pens from the White House, pens with FM radios and pens to detect Wifi. The oldest piece is a slate pencil  dating back to 1884.

There’s an old card catalog from a library (Google it, Gen Zers) full of pencils from different colleges and universities. There are expensive designer pens, antique quills and inkwells and blotters, and pencils representing every NFL team from the 1980s and ’90s.

One can walk from room to room for hours, examining each batch of writing instruments as they are grouped on tables, in display cases, framed on the walls, encased in flooring tiles and beyond. Tom is more than happy to expound on the history of most of the items—as someone who spent about a dozen years in community theater, he’s more than happy to perform the role of historian and tour guide, Karyn pointed out.

“There’s a story with everything that comes in the door, pretty much,” Tom said.

Plans for the future include the installation of the homemade floor pieces. That project has been helped along by a collaboration with Winneconne High School, and two students who’ve been visiting twice a week to design and create new works of art for the future floor. There’s also a chance they’ll be taking on a donation of about 100,000 more pens and pencils from a collector, which would more than double their current stockpile.

No matter what happens next, Tom and Karyn are happy to continue the seemingly never-ending MOWI to-do list. There’s always new donations coming in, new history to discover, new items to check out. There also are always new tasks for the retirees to take on.

“Little by little, you get sucked in,” Tom said. “That’s what had me up at 7:30 this morning, working in the garage.” 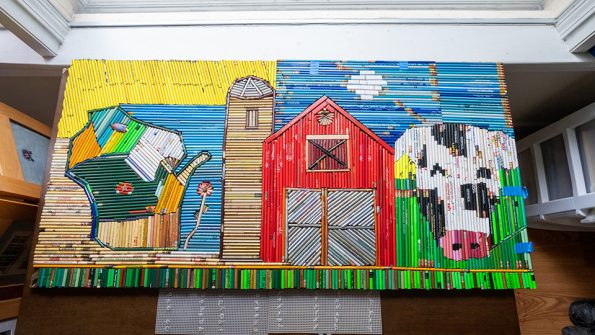 The Schmitzes plan to turn works of art made from pencil pieces into flooring in their Museum of Writing Instruments.