‘So much fun for me’: Kinesiology grad, now gym owner, always fired up to go to work 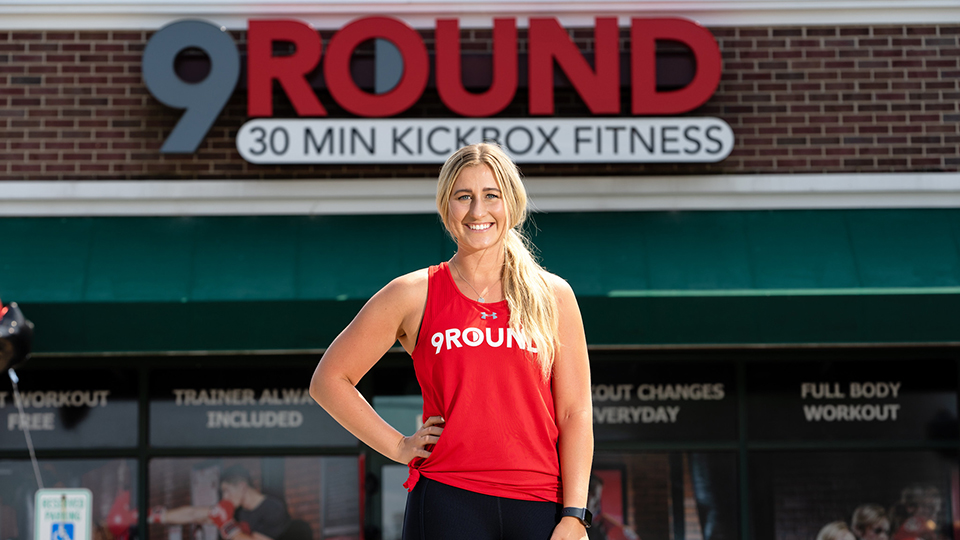 It’s hard to step foot into a 9Round kickboxing gym and not want to at least throw a few jabs.

Once inside the facility’s single exercise room, the vibe takes over. The music is loud, all pulsing bass and urgent pace. Members are mid-workout, sprinkled with sweat and gutting out squat jumps, pushups and pouring punches and kicks into heavy bags. The trainers themselves, seemingly caffeinated to the max, use focus mitts for targets, absorbing more punches and kicks and retaliating with shouts of encouragement.

It’s that vibe that had Cassie Murphy hooked—so much so she decided to take a swing at opening one of her own.

Murphy, who graduated in 2013 with a kinesiology degree from the University of Wisconsin Oshkosh, celebrated the third anniversary of the opening of her 9Round kickboxing gym in Oshkosh last month. The occasion was made a little sweeter given the recent return to normalcy after about a year of uncertainty because of the pandemic.

Three years in, life is good.

“It’s just so much fun for me,” said Murphy, who was Cassie Niles during her UW Oshkosh days. “I’m lucky to be able to enjoy what I do. Every day I get to go to work and I’m in my leggings and my tank top, and it’s just—’Let’s go!'”

The Janesville native opened the privately owned and operated franchise with her husband and fellow UWO alumnus Justin Murphy ’14, in summer 2018. The gym at 1623 20th Ave. is one of 16 9Round gyms in Wisconsin and about 500 nationwide. 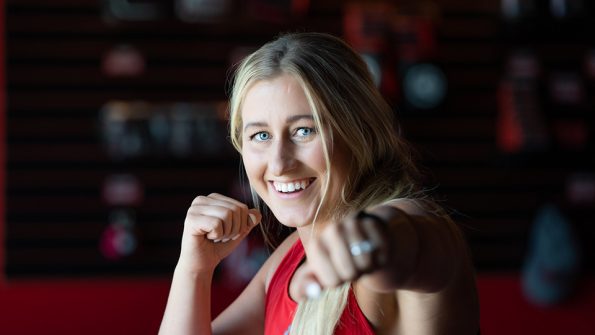 Cassie Murphy ’13, opened the 9Round kickboxing gym in Oshkosh in 2018.

Off the starting block

While progressing through the kinesiology program, she shifted her focus and emphasis more than once, never thinking much about someday running her own gym. That idea started rounding into shape during an internship in South Carolina and then while earning a master’s degree in business and sports management from Concordia University, St. Paul.

Experience working as a personal trainer at Anytime Fitness locations in the Fox Cities boosted her confidence and expanded her skillset, and after a few years as a club director at the Appleton location, she began to consider her options.

In 2017, a friend recommended she check out the 9Round gym in Appleton. Murphy was skeptical.

“I was like, ‘Kickboxing is not my thing.’ Kickboxing was like karate to me. It was very foreign. And she said it’s fun, you get to hit stuff,” she remembered. “I said OK. So I went and it was just a blast. I went home that day to my fiancé and was like, ‘Babe, we’re going to open up a 9Round.’ He’s like, ‘What?’ I said, ‘You just wait and see.'”

Sure enough, after a lengthy process to secure financing and getting approval for the franchise—which including a trip back to South Carolina to be interviewed by the 9Round powers that be—the Murphys were officially business owners. 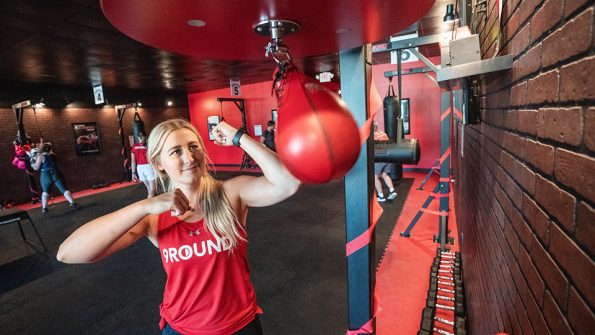 Murphy studied kinesiology and was on the track and field team at UWO.

The ceaseless high-energy environment that is the 9Round experience was part of the draw of Murphy. Different from group exercise classes at many YMCAs or other fitness chains, the 30-minute workouts start whenever a member wants. The gym is set up with various stations and, during a session, the members rotate from one to the next every three minutes. Loud audio and visual cues mark each round, and a trainer is always on hand with focus mitts and to help in any other way necessary.

“Even if it’s your first time, second, 50th or 600th workout, we’re still going to go around and show you exactly what to do,” Murphy said.

Also important to know: 9Round gyms aren’t training anyone for fights. The purpose is the anaerobic and aerobic exercise. Nobody—besides a trainer wearing the focus mitts for targets—gets hit. And nobody is taking skills learned at 9Round into a ring or an octagon.

While calorie-burning is a priority, Murphy can point to the back wall where the 9Round mission statement is displayed to emphasize that for many gym membership is as much about mental health as it is physical health. The gym can be an escape from the world where for 30 minutes the focus is on one single undertaking, and there’s a trainer that’s got your back.

“What we strive for here is not about stepping on the scale and seeing the weight go down,” she said. “Yes, that’s a great thing if that’s a goal for you. But the biggest thing, and it’s our mission statement, is getting members stronger physically and mentally.”

Murphy said she’s regularly employed UWO students—including a handful of kinesiology majors. Right now five of her seven part-time employees are students at Oshkosh. It’s a small community she’s helped build up. It’s something she’s proud of and has gone a long way in helping the gym thrive, even after the chaos of 2020.

“For us it’s fun because we’re a small studio,” she said. “I know half these people’s dog’s names, you know? It’s fun for us as trainers to have that connection that you’re not going to get anywhere else.”