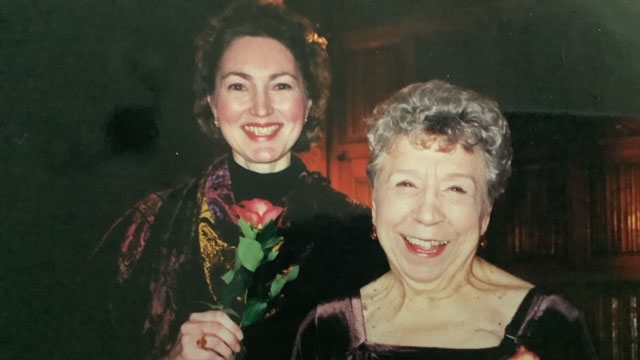 In this sesquicentennial year for the University of Wisconsin Oshkosh, it is fitting to look back and celebrate a theatre professor who impacted thousands of students during her 33 years of teaching. 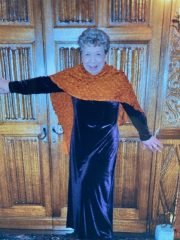 Emerita Professor Gloria Link, who passed away in 2006, was described by her friend and colleague Mary Hiles, “as a petite 5’3″, but a towering presence on campus and in the community” for more than three decades.

Link has the distinction of being the only professor to achieve a 100% positive rating (perfect score on the student evaluation process) as an instructor for the pit lecture class “Appreciation of the Drama” with more than 200 students, according to Emeritus Professor Roy Hoglund, a former colleague in the drama department, who described Link as a historian, actor and critic of the art form.

Hoglund said Link would teach two of the large sections a year. He said he taught it a few times, but called it a “real challenge.” By the time he was hired, Link had taught the class for about 20 years.

“She was a one-of-a-kind who worked to engage as many as possible into the theatrical experience,” Hoglund said. “My first exposure to Dr. Link was as a high school senior. My mother, wishing to complete her bachelor’s degree, was taking Dr. Link’s directing class. My mother asked that I play my guitar for her project on the play, The Sand Box. From that time forward, Dr. Link referred to me as ‘her former student.’ That followed me into when I was hired at Oshkosh in 1986. Full circle.”

Colleague and friend, Dorlis Grubidge, said Link even had a hand in theatre’s physical presence on campus.

“Not only did she develop the academic and performance programs, she also oversaw the construction of the physical facility,” Grubidge said. “Gloria spent many hours correcting contractors not knowledgeable in theatre design. The only battle she couldn’t win resulted in the bane of our stage designers―the low proscenium.” 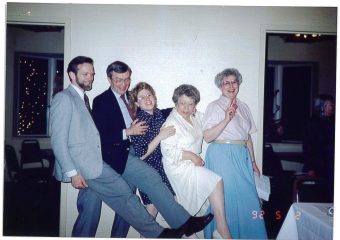 For all to appreciate

Hiles noted that after Link’s death, reel-to-reel tapes were given to her by Link’s sister―tapes that included Link’s Intro to Drama class lectures that had been broadcast on the UWO radio station. The tapes rested in Hiles’ attic for nearly a decade until they were turned over to the UWO theatre department when she moved to South Carolina in 2015.

UW Oshkosh archivist Josh Ranger, noted that Link’s drama appreciation lectures have been loaded into the campus media streaming platform and can be heard here.

Hiles recalled doing a program with Link in the early 2000s, on Shakespeare’s women. It was performed at various venues, including the Paine Art Center and Gardens and Oshkosh North High School, where they worked with theatre and drama classes.

“She was a truly amazing actress and teacher,” Hiles said about her friend. “It was a huge privilege for me to work with her.”

Hiles said the two of them frequently attended plays together in the Fox Valley and Milwaukee or Chicago.

“Inevitably one, and often several, of her former students would suddenly appear out of the crowd and tell her how much her class had meant to them,” Hiles said. “It was a class for non-theatre majors. Many of them said she was the reason they were attending plays all those years later.”

Hiles said Link invited non-theater majors into a beautiful world they would not have known.

Former student, Greg Triggs, ’85, a show director and writer whose client roster includes Disney, Disney Cruise Line, SeaWorld, the Tribeca Film Festival and the World Science Festival, said he still uses lessons learned from Link―the most important of which is “owning your ideas and opinions honestly.”

He recalled his first class with Link in 1981 at the height of soap opera frenzy. A first-year student asked if they could cancel class to watch Luke and Laura’s wedding on General Hospital.

“Gloria took off her glasses, paused to ponder and said, ‘I’m going to assume you’re joking. Now where were we?’ She (the student) had been ‘Linked.’ Less amusing,” he said, “were the times when I was the one being ‘Linked.’”

Triggs said Link was his adviser and he was a senior with no idea what to do with his degree. He spoke to her about the possibility of attending grad school and she told him she thought he was considering it because he was scared―wanting to make the decision instead of figuring out what he wanted. She wasn’t telling him not to go to grad school, just that it wasn’t the right time. She said he needed to go out and figure out the limitations of the education he already had. Triggs heeded the advice.

“A friend of mine who went to Harvard once told me ‘the key to a good education is finding the one professor you think can change your life, then bleed them dry. Learn all you can,’” he said. “For me that professor was Dr. Gloria Link.” 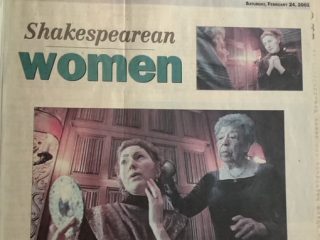 Another former student, Kathi Koenig, ’89, who spent more than 25 years working as a stage manager in professional theatre throughout the U.S., said UWO theatre and Link gave her and other students a firm foundation in their chosen fields.

“The department was very professional in its policy and approach,” she said. “They gave us a great deal of responsibility, then challenged us to live up to the standards they had set. It was very empowering.”

Koenig said Link ran the program like a business and had students planning the season, working out the budget, mounting the productions, running the box office and doing the marketing.

Students, Koenig said, loved hearing her stories about her experiences in theatre.

She recalls students showed appreciation for their professor by building a gigantic snow sculpture of Link in front of the fine arts building, her hand extended in a toast. Upon her retirement, friends, current and former students, colleagues and supporters honored Link with a surprise standing ovation inside the theatre.

Link was the coordinator of theatre from 1959 to 1992, joining UW Oshkosh after teaching at her alma mater, Marquette University, and at the University of Tampa, Florida, according to her obituary. She taught classes, directed plays and held positions on Faculty Senate and curriculum and planning committees.

Additionally, Link was a theatre consultant for the Green Ram Theatre in Baraboo for 11 years and resident director of the group for seven summers.

Beginning with her first acting role at the age of 7, until her last performances in Shakespeare’s Women at the Paine Art Center, Link held well over 100 roles. Oshkosh audiences may remember Link in the Fredric March Theatre opening production of The Visit and later roles in The Gin Game, Painting Churches and her one-woman show, Gertrude Stein, Gertrude Stein.

Besides developing and teaching her Appreciation of the Drama that drew more than 200 students per semester, Link was honored with the Distinguished Teaching Award in 1974 and was nominated for the Rosebush Professorship three times.

In addition to her duties as coordinator of theatre, teaching classes and directing plays, her 33 years of service to UWO included service on Faculty Senate for nine years and its president for two. When a new Dean of Letters and Science Faculty Committee was organized, Link was elected to represent the arts areas.

She further distinguished herself by penning the lyrics for the University’s Alma Mater school song―printed on the inside back cover of the commencement program.

An accomplished painter, Link had her works shown in local exhibits.

Following her retirement in 1992, Link continued to offer courses and tours for the University’s Learning in Retirement program. She was a founding member and served nine years on the Special Opportunities for Artist Residencies (SOAR) board as an advocate for arts in the schools. Through the program, she lectured, performed and worked with Oshkosh area students on stage and in the classroom, generously sharing her talent and expertise. SOAR made it possible for schools to provide students with opportunities that were far beyond the constraints of their budgets.