Spotlight on Teaching and Learning

Women and Geology: Who Are We, Where Have We Come From, and Where Are We Going? A new book by contributing author and editor Beth A. Johnson, UW Fox Valley

Dr. Johnson describes the history of the creation of the book and the importance of publicizing the work of women’s contributions to the field of geology. 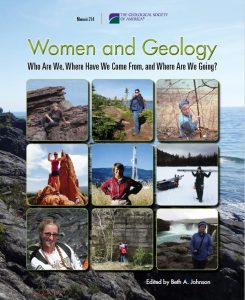 What were your impressions of women in geology while in college?

When I first started studying geology in college, my classmates were roughly 50% women, so I never realized there was any issue attracting women to the science.  It really didn’t change much when I worked on my masters.  It wasn’t until I was working on my PhD and started looking around at the department I was in that I realized that there weren’t very many women.  We had many women studying for their bachelors and master’s degrees, but not as many working on their PhDs.  That’s when I realized there was a problem.

How did you come up with the idea of the book?

The whole thing involves attending two professional conferences.  The first conference was the North-Central Section Meeting of the Geological Society of America (GSA) in 2015.  While I was there, I was reading Headstrong: 52 Women Who Changed Science and The World by Rachel Swaby.  As I read the profiles of these scientists, I realized there were very few geologists mentioned and, considering the subtitle of 52 women who changed science, I was shocked that Florence Bascom (the first women hired as a professional geologist and the first woman geology professor) was not featured.  Surely she was an example of someone who changed science!  So, I proposed a Women and Geology technical session for the next section meeting the following year.  The second conference was at the national Geological Society of America Meeting in late 2016.  By this point, I had already chaired one successful Women and Geology technical session and I was at that conference to chair another.  I was looking through the conference program when I saw an ad from GSA about turning one’s conference presentation into a GSA Special Paper.  At first, I dismissed it, but I couldn’t shake the idea of a Women and Geology book.  I was still sitting in a session at the conference when I finally emailed GSA and started inquiring about the process.

What is the book about?

The idea of the book was to look at women’s contributions to geology: past, present, and future.  Women have participated in the science from the very beginning, but too often they went without credit.  But, I also wanted to look at how women’s experiences in geology are portrayed today as well as what efforts are being made to recruit and retain more women in the geosciences.  Each chapter is written by a different author and all our authors are from all over the country and are at different stages in their careers, which gives the book a fuller perspective.

You are also a contributing author to the book. Can you tell us more about your contribution?

My article is called “Hollywood representations of women in geology: Women geoscientists in film (1986-2016)”. I’ve always been interested in how geologists are perceived by society at large.  So many people have the mental image of geologists as older men in flannel shirts looking closely at rocks, but they rarely think of women in a similar role.  Since there aren’t many geologists for people to interact with to get an accurate idea of who we are and what we do, many of them are getting such perceptions from tv, movies, etc.  So, I started looking at disaster movies to see how many featured geologists, the genders of those geologists, the critics’ perceptions of the movies, and the box office results of those movies.  Then I compared the data to demographics of real women in the geosciences who graduated and were active during the same period.  Sadly, the low number of women geologists we see on screen is comparable to the low number of women geologists we see in real life.  However, graduation rates for women geoscientists are improving, so this will hopefully change in the future.

How did the Woman and Science Program contribute to this publication?

This book was my first time as a volume editor, so I was learning about the process as I went along.  Not knowing any differently, I thought the publisher would help find reviewers for the manuscripts.  When I learned that was not the case, I felt a bit overwhelmed because I didn’t know who I could contact for help.  Then I thought of the UW System Women and Science Program.  I have been a campus representative for this for a few years now.  I thought a project like this would be in line with the program’s mission, so I contacted the group and asked for help.  I had lots of people step forward to help and, although many of them were not geoscientists, the backgrounds of those who did step forward often aligned with the topics of some of the manuscripts (i.e. two reviewers who had done fieldwork in Antarctica were asked to review a manuscript on the first women researchers in Antarctica).  I had a few people from outside the program also serve as reviewers, but the core group was from the Women and Science Program.  I’m grateful for all their help. 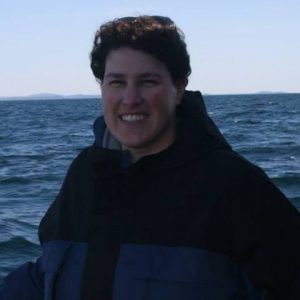