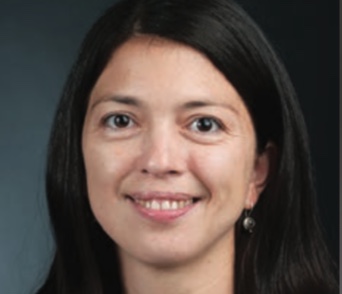 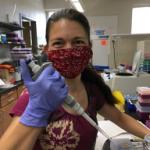 Research: I am interested in the molecular and biochemical ways that bacteria sense, respond, and adapt to stress conditions. Specifically, in my lab we are studying two newly characterized genes involved in manganese homeostasis.

Manganese is an essential micro-nutrient for organisms from bacteria to humans. It is a cofactor for critical enzymes and helps detoxify reactive oxygen species (ROS). Manganese is required by photosynthetic organisms, since it is a part of the water-splitting complex in Photosystem II.  Manganese is also critical for many pathogenic and symbiotic bacteria in order to survive in eukaryotic host tissues.  Salmonella need manganese to infect human macrophages and the nitrogen-fixing plant symbiont Rhizobium uses manganese to live inside alfalfa nodules.

Yet in excess, manganese is toxic. In humans, manganese over-exposure can lead to neurodegeneration.  In bacteria, excessive manganese likely causes imbalanced metal pools in cells that affect enzyme function.

In my lab, we are investigating a potential manganese chaperone, MntS, and a manganese exporter, MntP. We hypothesize that MntS binds to manganese specifically and delivers it to target manganese-using proteins. To test this, we are using biochemical and biophysical approaches to purify MntS and examine its binding to various metals and to other proteins in vitro. We are also determining which proteins MntS binds to in vivo using bacterial two-hybrid assays. Intriguingly, MntS is a small protein of only 42 amino acids, but appears to have multiple isoforms when an epitope-tagged version is examined by gel electrophoresis and Western blotting. We are also making mutations to investigate whether it is subject to post-translational modifications or processing.

The other main project in the lab aims to characterize the structure and function of the MntP manganese efflux protein.  We have performed computational analysis of the sequence, including multiple sequence alignments and membrane topology predictions.  We have selected a panel of highly conserved, putative metal-binding amino acids to mutate.  The MntP mutants are then tested for activity using a manganese toxicity growth assay. We are also searching for additional phenotypes, or conditions where mntP mutant strains show growth defects, including osmotic and oxidative stress. In addition to identifying the metal-binding amino acids of MntP, in the future, we plan to determine the structure of the exporter in the membrane.

Any interested students, please email to find out about research opportunities in the lab!  watersl@uwosh.edu 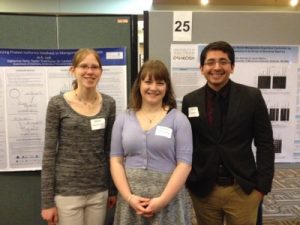 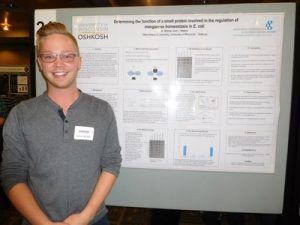 Nathan Witman at the UW Oshkosh Celebration of Scholarship 2018 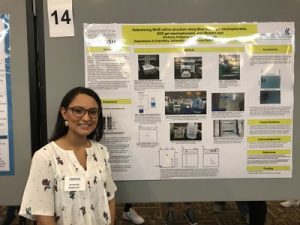 Kimberly Preissner at the UW Oshkosh Celebration of Scholarship 2019 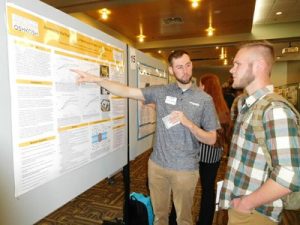 Luke Seuffer at the UW Oshkosh Celebration of Scholarship 2019

Students in My Lab: