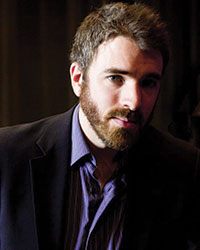 Nathan Edwards is a professor, award-winning sound engineer, and music creator from Wisconsin. As a UW Oshkosh alumnus, he formerly served as Assistant Professor of Audio Technology in the Digital Arts and Design program at Dakota State University in South Dakota and served as head recording engineer at Ark Media Group in Menasha, Wisconsin.

His musical work has been featured on MLB Network, WWE Network, CTV Television Network, American Public Media, Oprah Winfrey Network, and on popular podcasts and YouTube channels. He has had work featured at the South Dakota Art Museum, Washington Pavilion Visual Arts Center, Northern State University in South Dakota, and the North Dakota Museum of Art. He has also been featured as a performer on South Dakota Public Broadcasting and Wisconsin Public Radio and has presented his original compositions at conferences and exhibitions including the Society for Electro-Acoustic Music National Conference, Electronic Music Midwest, the CHAT Festival at the University of North Carolina, and Dartmouth University.

As an instructor, Professor Edwards believes in preparing students for a sustainable career in the music industry by not only instilling knowledge, but also inspiring students to deepen their passion and commitment to their discipline both in and out of the classroom. His areas of focus include real-world application, creative freedom and autonomy, and career guidance. As an active recording engineer and creator, he seeks to inspire students to commit to the intense work and dedication necessary to achieve success.

Professor Edwards earned his Bachelor of Music degree in Recording Technology and Music Business from the University of Wisconsin Oshkosh, and his Master of Music in Electronic Music and New Media Technology from Northern Illinois University.