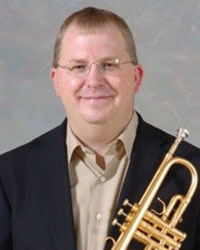 Dr. Marty Robinson, Professor of Trumpet and Jazz at the University of Wisconsin Oshkosh, directs the jazz ensembles and teaches jazz history in addition to applied trumpet students. He holds degrees from Lawrence University (B.M. in trumpet performance), the Eastman School of Music (M.M. in jazz studies), and Florida State University (D.M. in composition). Prior to his appointment at Oshkosh for the fall of 2004, Dr. Robinson served for 10 years as Associate Professor of Trumpet and Jazz Studies at Florida A&M University in Tallahassee, where he was recognized as “Teacher of the Year” in 2001.

Dr. Robinson’s interests cover the broad spectrum of music as a performer, composer, musicologist, and educator. He is widely regarded throughout the Midwest as equally a jazz and classical trumpeter, both as a soloist and in chamber music settings. He maintains a busy schedule that includes orchestral performances, jazz gigs, brass quintet recitals, big band concerts, touring musical shows (including the Temptations, Mannheim Steamroller, and the Four Tops), and chamber music performances. He has released a jazz trumpet CD, “Standards – Vol. 1,” and is active as a jazz pianist and clinician. Other CD recordings which feature his trumpet playing include:
Under the Venus Moon – The Music of Mario Friedel
Just Like a Woman – Janet Planet
Love Letters from Cary Bluff – The Music of Chris Swanson
Kyle Knoke 50
I Can’t Give You Anything But Love – Tim Buchholz Nonet
Vic Ferrari 10th Anniversary Album

Robinson is the composer and trumpeter on numerous recordings that have been aired on national television and radio, including music for HBO’s The Sopranos, ABC’s 20/20, Fox’s NFL Films, PBS’s National Geographic, and CBS’s U.S. Open Tennis Coverage, as well as for national campaigns for NBC’s ER, Hershey’s Chocolate, ADT Security, Gillette, and Burger King. His television music has been heard internationally in Canada, the Czech Republic, Germany, Japan, Malaysia, Netherlands, South Africa, and the United Kingdom, among others.

An active and commissioned composer across musical genres, Robinson’s recent works have been performed by the Columbus Jazz Orchestra, the Boston Pops Orchestra, trumpeter Byron Stripling, saxophonist Joshua Redman, and drummer Herlin Riley. Other recent commissions in the contemporary classical realm include works for solo trumpet with organ, wind ensemble, saxophone quartet, a string bass concerto with orchestra, brass quintet, SATB choir, trumpet duet with piano, symphony orchestra, mixed wind chamber ensemble, and marimba. Older major works include his Gloria for mass choir and brass quintet, Allegory of the Cave for wind ensemble, Children of Gebelawi for symphony orchestra, The Uncommon Path for wind ensemble, and a chamber piece for twelve players titled Five Rodin Sculptures. In addition, he has composed four brass quintets, a string quartet, and numerous other chamber works. He currently arranges jazz ensemble music for trumpeter Byron Stripling and the Columbus Jazz Orchestra, and the UNC Jazz Press publishes some of his 140 jazz compositions and arrangements. His original jazz works have been written for trumpeter Claudio Roditi, saxophonist Gary Bartz, pianist Steve Kuhn, and guitarist Gene Bertoncini. His jazz shuffle, The Art of Lee, was premiered at the Montreux Jazz Festival in Switzerland, and he has had several other recent jazz commissions by high schools and professional big bands. His jazz music is played by both universities and high schools across the country.

Dr. Robinson’s interest in music history has led to scholarly research papers as diverse as Stravinsky and Meter in L’Histoire du Soldat, Don Redman: The Beginnings of Jazz Arranging, and Teaching Jazz History as the Ultimate Humanities Course. He has also presented scholarly papers on the jazz trumpet solos of Thad Jones as well as Duke Ellington’s Shakespearian works. His expertise as a jazz historian and musicologist led to an appointment on the IAJE Resource Team of Advisors in the area of jazz transcriptions.

Dr. Robinson has been active as a clinician at high schools and universities throughout the Southeast (when living in Florida) and in the Midwest, often featured as guest artist with the ensembles. Since 2000, he has served on the faculty at the Birch Creek Summer Jazz Academy in Door County, Wisconsin. From 1997 through 2002, he served as a judge for the Great American Jazz Piano Competition held in Jacksonville, FL. He has also been quite active in state and national Jazz Educator and Trumpet Guild organizations, including giving clinics, presenting papers, arranging, and performing as a trumpeter. He had the distinct honor of being named as Director of the 2016 Wisconsin High School Honors Jazz Ensemble. His former students include two current members of the legendary Airmen of Note jazz ensemble, and others have performed professionally with Wynton Marsalis, Roy Hargrove, Nancy Wilson, the Lincoln Center Jazz Orchestra, Elvin Jones, the Count Basie Orchestra, the Charles Mingus Jazz Band, the Village Vanguard Band, the Glenn Miller Jazz Orchestra, and the Saturday Night Live Band.