The Honors Alumni Award is presented to graduates of The Honors College whose professional and civic accomplishments have contributed significantly to their field and to their community.

The recipient of the Honors Alumni Award is recognized at the Spring Honors Graduation Ceremony and is asked to briefly address the graduating class.

Please learn about our 2019 awardee: 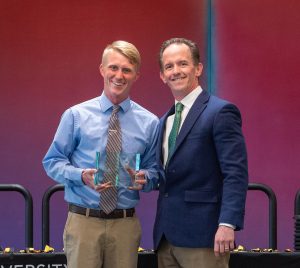 John Dewitt (Mathematics, 2013), whose impressive record of achievement both in the classroom and on the field were a winning combination when this year’s nominees were being considered, addressed seventy-five Honors College Associates and Graduates and hundreds of guests at the Spring 2019 Honors Graduation Ceremony on Friday, May 17, at the Culver Family Welcome Center.

John, an avid and distinctly accomplished runner in his own right, works and lives in West Allis, Wisconsin, where he inspires and encourages Nathan Hale High School students with equal parts dedication and enthusiasm as both a mathematics teacher and as a track and field coach.

John is the first full-time educator to receive the Honors Alumni  Award.

While on break from Emory, Kelly returned to UW Oshkosh to give a presentation on her research and experiences as a graduate student. (Photo courtesy of UW Oshkosh.)

Kelly Genskow completed her undergraduate studies at UW Oshkosh in spring 2013 as an Honors Graduate with a 4.0 and a double major in Biology and Chemistry. During that time, in concert with many other achievements, she served on the Executive Board of the University Honors Student Association and completed a thesis project, “The Escherichia coli Small Protein MntS and Its Role in Manganese Homeostasis,” for her Honors Senior Capstone.

Thereafter, Kelly pursued a master’s degree at Emory University’s Rollins School of Public Health, which was awarded to her in 2015. During this time, she kept in touch with UW Oshkosh faculty and staff during her graduate program breaks. In March 2015, as part of the Honors Alumni Network series, Kelly gave a presentation at Oviatt House that described her master’s program, her work in a neurotoxicology lab (researching pesticides and flame retardants that may have neurological effects), and her internship at the Centers for Disease Control and Prevention in the Tobacco and Volatiles Branch. “It makes for long days,” she reflected, “but I love what I’m doing. I feel like my time in Oshkosh and with Honors prepared me wonderfully for grad school, and it has been a very smooth transition​.​” 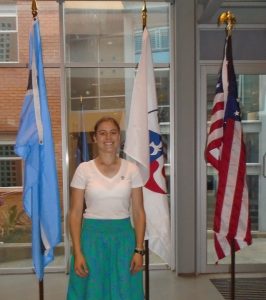 Kelly in October 2015, officially sworn in as a Peace Corps Volunteer, wearing a skirt of traditional Botswanan fabric. (Photo courtesy of Kelly Genskow.)

During her last year at Emory, Kelly began to prepare for her next step—a two-year commitment with the Peace Corps, which took her all the way to Botswana, where she lived and worked from 2015 to 2017. Her years there inspired another fascinating talk at UW Oshkosh, “Stomping Out Malaria: Working toward Elimination through the Peace Corps,” which gave insight into the extensive efforts necessary to implement effective malaria prevention programs—and to improve the health education network—within Kelly’s adopted community. Kelly’s volunteerism, however, did not end with her stint in Botswana. After she returned to the United States and was busily applying for positions far and wide, Kelly contacted the Red Cross to lend a hand in Puerto Rico in the devastating aftermath of Hurricane Maria. She remained there until the end of December 2017.

In 2018, Kelly’s résumé only continues to impress: In May she moved to Fairbanks, Alaska, where she is working with an Indian Health Services provider, Tanana Chiefs Conference, as an environmental health specialist. Kelly provides a wide range of services, including “health inspections and working with the water, sanitation, and hazardous waste infrastructure across a very large area of the interior of Alaska.”

The Honors College community is proud to recognize Ms. Genskow for these and other achievements, and we wish her the very best in the Last Frontier! Given her long history with Honors at UW Oshkosh and her ongoing commitment to service and education, Kelly was our undisputed choice for the 2018 Honors Alumni Award. 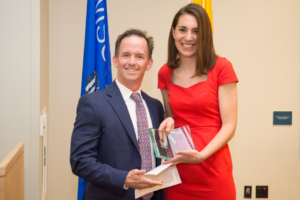 Tracy Wilichowski graduated from the University of Wisconsin Oshkosh and from the University Honors Program (now The Honors College) in 2012 with majors in History and Philosophy and with a minor in Social Justice. Before graduating, she was accepted into the highly competitive Teach for America (TFA) program. For two years, she served as an instructor in the Miami-Dade Public School System, where she worked in challenging circumstances with underrepresented children. While in Miami, Tracy collaborated on a number of initiatives involving curriculum change and goal-driven instruction. Her students’ writing test scores increased dramatically under her mentorship. Shortly after honoring her commitment to TFA, Tracy was awarded a Rotary International Global Grant Scholarship to study international development at the London School of Economics (LSE). In 2015, she graduated from LSE with High Merit and a Master of Science in Development Management. While living in London, she used her skills to serve others: she interned for a development company and was a member of a launch team that raised funds for a water resource management project in Kenya, Africa. Tracy also served as a consultant to help evaluate women’s legislative, civic, and political party programs operating in a post-Arab Spring context. Additionally, she made time during her LSE years to meet with, encourage, and advise Honors 275: Culture Connection students in London while they were studying abroad.

Currently, she resides in Washington, DC, where she works as an analyst for the World Bank. 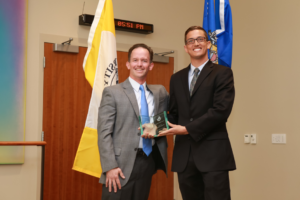 During his junior year, Jon saved a life by donating bone marrow to a complete stranger through Be the Match. He then founded a student organization at UW Oshkosh to convince others to learn about this lifesaving network and to join Be the Match’s bone marrow donation registry. More than 1,000 student have registered since then, and of those, matches were confirmed to be compatible in more than a dozen cases.

During Jon’s senior year, he published a version of his Honors Thesis on Warren Buffett’s “Cigar Butt” investing technique, a strategy that historically has produced returns of almost 29% per year, in the Journal of Investing. Upon graduation Jon sat for and passed the Chartered Financial Analyst examination, which is widely considered the gold standard on Wall Street and has a 3% pass rate. Jon is the youngest person ever to have passed this exam.

Jon is presently a Portfolio Manager at Carl M. Hennig Inc. in Oshkosh, where he manages approximately $40 million in accounts utilizing the very same Cigar Butt methods he researched for his Honors Thesis. He is an active citizen who counts among his interests the Southwest Rotary Group, the Alta Resources Center for Entrepreneurship and Innovation Board, and beekeeping, which resulted in the cofounding of Bee Bella lip balm and honey products. He is also a pending Guinness World Records holder for the longest distanced traveled while conga line dancing.

Jonathan is the first recipient of the Honors Alumni Award, which he accepted at the Spring 2015 Honors Graduation Ceremony.