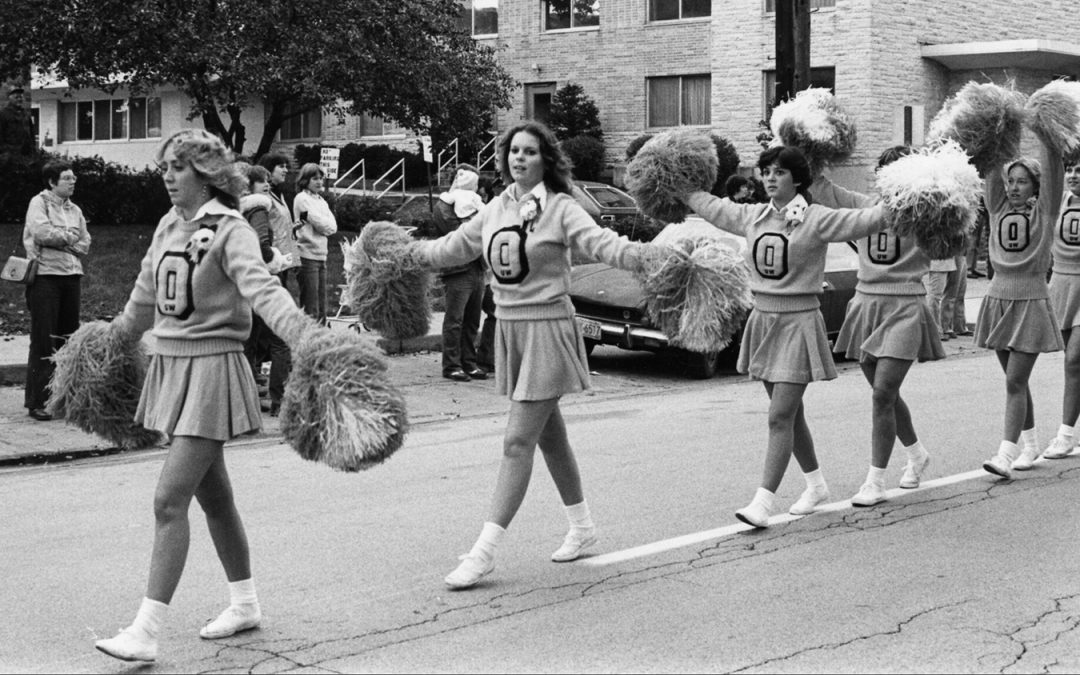 Most of us know Homecoming to be a week of activities to showcase our pride for all things UW Oshkosh and a celebration for students, alumni and employees alike—albeit maybe in different forms. We also know it to be an occasion that includes gatherings, good times and often a spotlight on athletics. (This year’s Homecoming games at Titan Stadium are a 1:30 p.m. football game against UW-Eau Claire and a 7 p.m. women’s soccer game against UW-La Crosse.)

But over the years the eventful week has had many different looks and focuses, from the early days of marches across campus to hotly contested royalty contests to citywide celebrations. With a little hindsight it’s clear Homecoming can serve as a snapshot of life on campus in a given era.

With the 100th anniversary of Homecoming upon us and with the help of University Archives team, we thought we’d look back at five key moments from the past century to see how we got here.

Much like UWO has spent 2021 celebrating its 150th anniversary, a century ago the institution then known as the Oshkosh State Normal School was proud to hit the 50-year mark. To honor the major milestone for the teacher-training school, a run of events was planned and billed as the Jubilee celebration. Among the festivities was a dance, church services, a processional, guest speakers and an automobile drive. A contest was held to award $10 to whoever could come up with the best “anniversary song.” The public schools in Oshkosh even closed so alumni could attend. 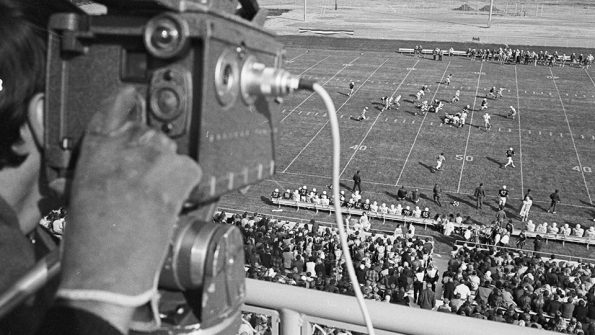 The first Homecoming game at Titan Stadium was played in 1970.

While various traditions would come and go—including a bon fire, tug of war contests and sack races—one piece of Homecoming that’s remained relevant through 100 years is the football game that caps the week of celebrations. The team has played a home game each year during Homecoming, except for a four-year break in the 1940s (more on that later). That first year, Oshkosh topped Platteville 7-0. In the time since, the Oshkosh team has won 42 games, lost 45 and had eight ties. This year the Titans look to continue a recent hot streak: They’ve now won eight consecutive Homecoming games dating back to 2012. 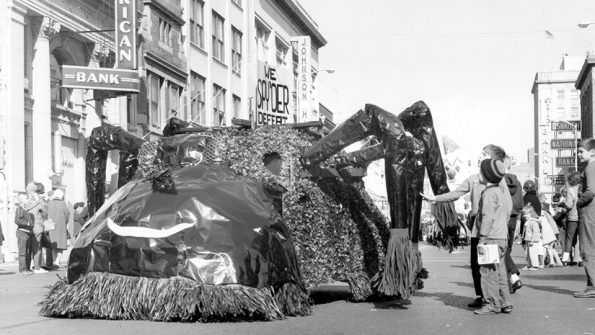 While previous Homecomings had what was essentially a parade—automobiles decorated in school colors carried graduates around town—it was in the fall of 1925 that the first real Homecoming parade was held. The Oshkosh Advance newspaper reported it was “intended to show the public of Oshkosh how large a composite group the Normal students really form.” The annual parade would go on to become one of the most significant of the Homecoming events from 1925 to 2009. At its height, Greek societies and clubs would compete to have the best float and the parade would attract large crowds to the downtown. 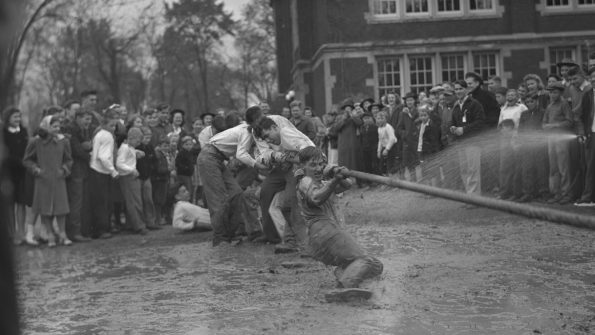 Tug of war contests were part of Homecoming in the 1930s and early ’40s.

The outbreak of World War II—and the involvement of the United States following the attack on Pearl Harbor in December 1941—led to the halting of most Homecoming activities. There was an informal dance in ’42, then no celebrations whatsoever the following three years. The Oshkosh football team also did not play a Homecoming game from 1942 through 1945. Homecoming resumed in 1946, in time for the school’s 75th anniversary. (Not until the COVID-19 pandemic in 2020 would another Homecoming pass by without a football game.) 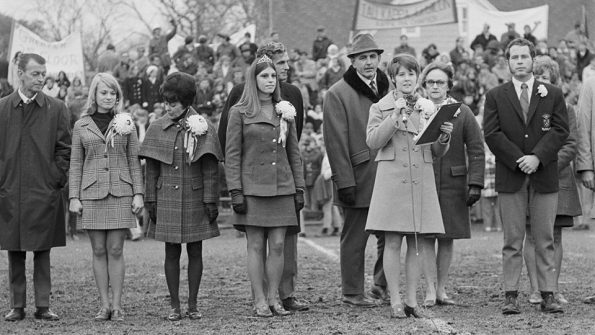 The Homecoming queen (center), court and their guests in 1969.

A new and enduring tradition launched with the crowning of the school’s first Homecoming Queen in 1948. Through the decades that would follow, this yearly election would grow to become a wildly popular event—candidates advertised throughout the city, on radio and TV and with lawn displays and megaphone motorcades. Some strict campaign rules were put in place in the early ’60s after acts of sabotage. In ’74 a Homecoming King, also elected by students, was added. That year a male student would campaign and win the title of Homecoming Queen in what he said was an attempt to bring awareness to the sexism involved in beauty contests. More recently, in 2015, the gendered titles were removed and now students simply choose two Homecoming Royals.