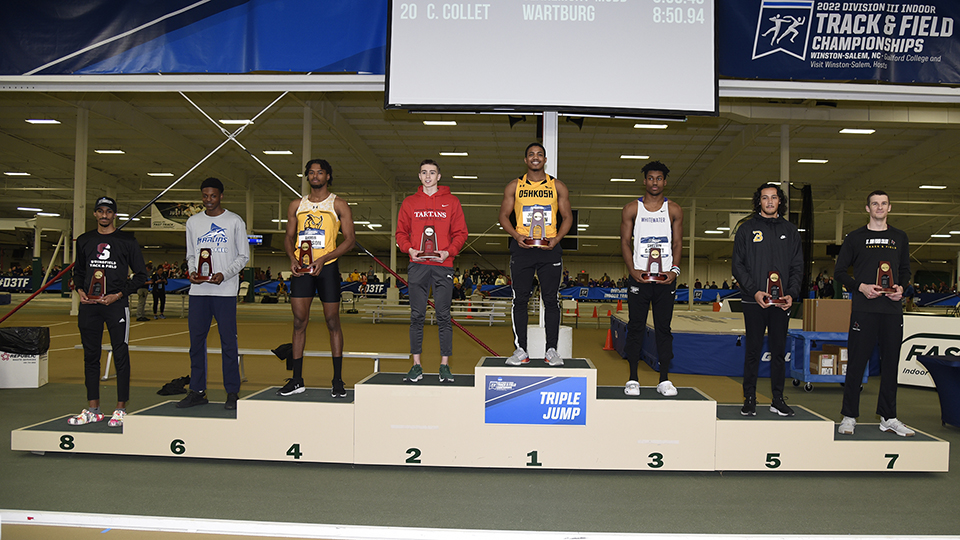 Wilburn captured his third indoor All-America award by winning this year’s triple jump competition with a school-record measurement of 50-11. Wilburn, who finished fifth in the event at the 2019 championships, entered this year’s national meet seeded first with a victorious qualifying distance of 49-8 1/2 from the Wisconsin Intercollegiate Athletic Conference Championships held Feb. 25-26. 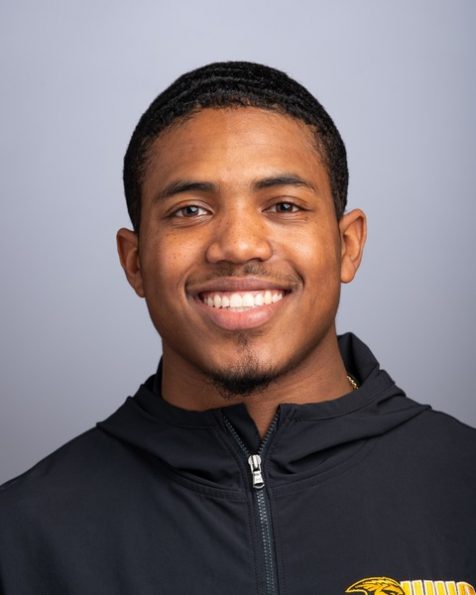 Justin Kiefel of Carnegie Mellon University finished second to Wilburn at this year’s Division III Championships with a skip of 49-0 1/4 and Shelvin Garrett of UW-Whitewater third at 48-9 1/2.

Steven Potter earned his second indoor All-America citation with his second-place time of 1:51.07 in the 800-meter run. Potter was seeded fifth in the event with a winning qualifying time of 1:54.82 from the WIAC Championship.

Ryan Wilson of Massachusetts of Institute of Technology ran to this year’s 800-meter run title at the Division III Championships with a time of 1:50.92 while Ben Kuxmann of Millikin University finished third in 1:52.68.

Grant also picked up his second indoor All-America prize. He finished third in the 60-meter dash with a time of 6.82 seconds. Grant, the event’s third seed, qualified for nationals with his school-record time of 6.72 seconds from the UW-Oshkosh Titan Challenge held Feb. 19. Grant was a sixth-place finisher in the 60-meter dash at the WIAC Championships.

Jalen Leonard-Osbourne of Ithaca College won the 60-meter dash at this year’s championships with a time of 6.76 seconds while Derek Plitt of Adrian College placed second in 6.81.

In the 1,600-meter relay, UWO’s quartet of Henderson, Koehn, Ryan Potter and Wheat finished eighth with a time of 3:23.90. The foursome was seeded fifth with a qualifying time of 3:17.18 from the UWO Titan Challenge. It was the first All-America award for all four Titans.

UWO was also represented at 2022 Division III Championships by Joey Kean, Londyn Little, Aaron McCarroll-Richardson, Denzel Thomas and Davian Willems in the 60-meter dash; Little, McCarroll-Richardson and Robert Ogbuli in the 200-meter dash; Ryan Potter in the 400-meter run; Caleb Cornelius in the high jump; Leslie Fisher in the triple jump; and Eli Tranel in the pole vault.

This year’s championships featured 20 entrants in each of the 15 individual events and 12 contestants in both two relays. The top-eight finishers in each event earned All-America honors.

UWO scored 25 points to share 10th place in the team standings with UW-Whitewater. The Titans, who won the 2009 NCAA crown, finished ninth at the 2019 Division III championships before the 2020 and 2021 national meets were canceled due to the pandemic.

UW-Eau Claire and Washington University in St. Louis both scored 35 points to share this year’s team title. Williams College finished third with 32 points while Loras College placed fourth with 30 and State University of New York at Geneseo fifth with 27.

UWO kicks off its outdoor season on April 2 at the UW-Platteville Open.