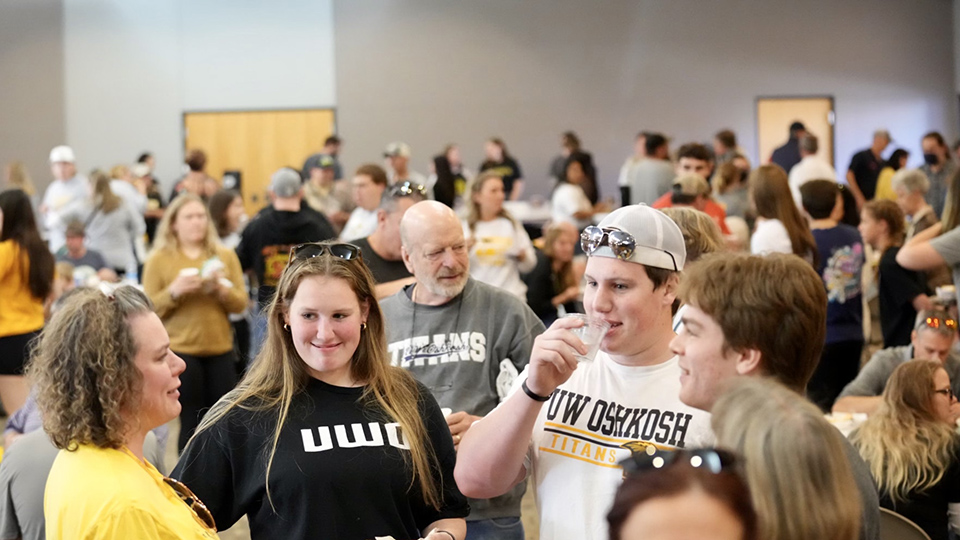 Before hitting the University of Wisconsin Oshkosh Titan Tailgate with its great selection of free food and beverages, first-year pre-business student Jett Maertz and his mom, grandma, aunt and cousin spent a few moments posing for a caricature that will provide a great memory of the day. The family members traveled Saturday from Maertz’ hometown of Sun Prairie to take in the UW Oshkosh family day festivities. In addition to food, there was games and prizes, a photo booth and various other activities throughout Reeve Memorial Union.

A large crowd of students, their family members and alumni—nearly all decked out in Titans gear—gathered at Reeve to “tailgate” before the Homecoming football game. People enjoyed walking tacos and street tacos, mac and cheese, white bean chicken chili, cookies and cake. There was tasty hot apple cider and adults had rave reviews of the Ale Titans! Amber beer brewed by Fifth Ward Brewing Co.

Aiden Funk, a first-year student from Kenosha, was showing a large contingent of family members around campus. The group also was planning to go the football game between the Titans and UW-Stout.

Funk resides in Evans Hall and said he’s been enjoying his time at UWO. A physical education major who hopes to someday be a coach, he has been involved in intramurals and was part of the Homecoming week flag football event. 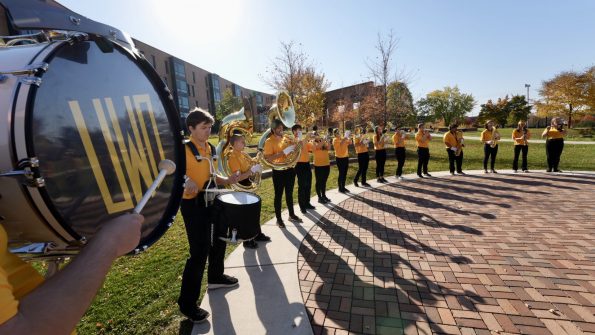 The Titan Thunder Marching Band put on a morning show on campus Saturday.

First-year psychology student Colin Jones, who resides in Fletcher Hall, was accompanied by his parents, Patti and Ryan Jones of Franklin and his brother, Riley Jones. After the Tailgate, the group planned to head to Titan Stadium to watch the game.

First-year student and women’s tennis manager, Amanda Hudgens of Lisle, Illinois, said she chose UWO for its nursing program. The pre-nursing student hopes her future will including working as a registered nurse. Amanda’s parents, Carmie and Steve Hudgens, were visiting campus and like many families were checking out the Tailgate and UWO swag at the University Books and More.

A pair of 1970 alumni, Jim Buehner and Gary Hanson, both of Oshkosh, were celebrating their time at UWO. Buehner stood out—he was wearing his old track sweatshirt. He was happy his daughter, Jamie, could be part of the Tailgate. She just moved to Oshkosh from Juneau, Alaska, and is teaching English at Oshkosh North and Oshkosh West high schools.

Jesse Ramsey and his mom, stepdad, stepbrother and girlfriend were planning to enjoy the glorious fall day watching Titans football. The group drove to UWO from Westfield-about and hour and 40 minutes from the Oshkosh campus.

Ramsey said he chose UWO because it was “fairly close to home” and for its political science program.

“I want to be a policy researcher in the Capitol or a staffer,” he said of his future career. 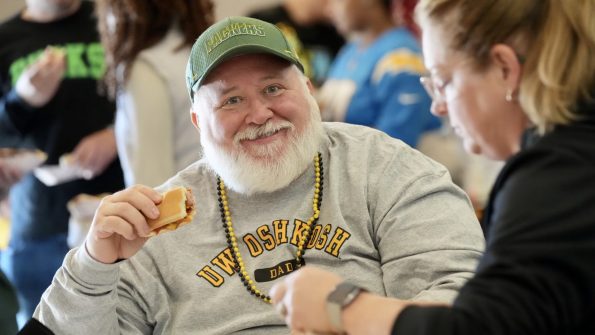 Deserving of an award for distance traveled were John and Brande Vescova of Phoenix, Arizona, parents of sophomore business major Andrew Vescova, who plays center on the Titans football team.

John grew up in Wisconsin and said his son is happy to take in the state and all it has to offer.