Once a gaming addict, UWO social work grad found purpose helping those struggling like he had 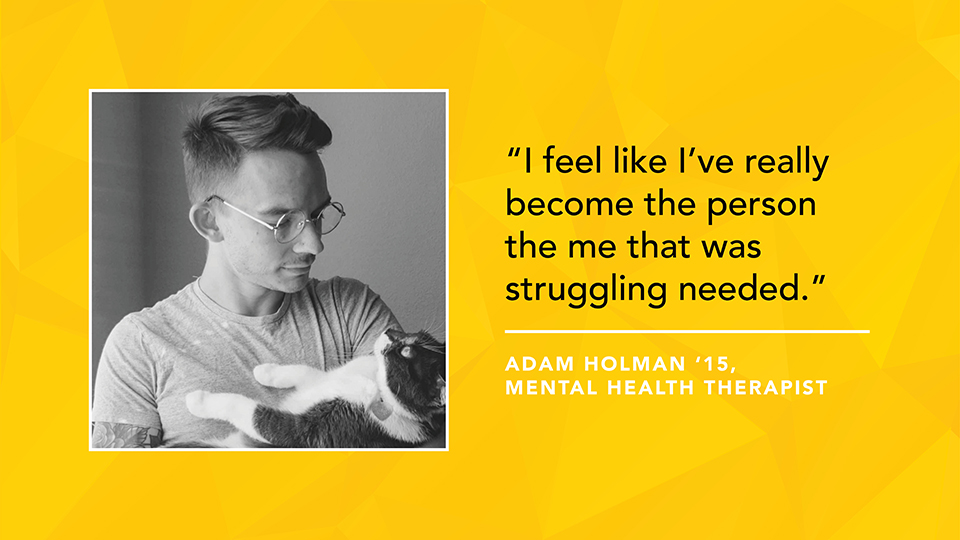 In his first two years of college, Adam Holman was lost.

The West Bend native first enrolled at a school in Milwaukee, then tried for a fresh start at what was then the University of Wisconsin-Fond du Lac. He hadn’t found a major he was passionate about and, despite finding some footing in his fourth semester, finished that second year with a GPA of less than 2.

In hindsight, Holman now can see what was holding him back—and the destructive cycle that consumed him day to day.

To cope with his fears and block out the realities of his situation, Holman found refuge in the one part of life he was finding success: video games. More and more, gaming became an escape until the point it was an addiction. At its worst, Holman said he was playing for 16 hours a day.

“It was literally like I didn’t want to have a thought,” he said. “I remember one day—and this is a little bit before starting to figure it out—I realized I tried to play so late in the night that I was tired enough that I could go to bed without thinking about the fact that I’m terrified of failing school.”

With help from an adviser in Fond du Lac and professional counseling, Holman learned to control his gaming habits and face the challenges he’d been avoiding at all costs. He found social work to be his calling, and that the effort he put into video games could be channeled into academics.

“In essence, I planted the seeds for my recovery before I entered UWO, then my experiences at UWO helped water those seeds to grow.”

As a senior, he won the Lois Miranda Advocacy Award, given to a student who has shown exemplary work in advocacy as modeled by Lois Miranda, a UWO faculty member in the social work department from 1973 to 1994.

Holman would continue to succeed in academics, earning a master’s degree in social work from UW-Madison in 2017, and then professionally, working for years in group practice in Madison before moving to Arizona in 2021. After his move last year came the launch of his own telehealth practice called Main Quest Psychotherapy. Through Main Quest, he provides care to patients in Wisconsin and Arizona, where he now lives.

Things have been going well from a business sense, which in turn means things haven’t been going so well when it comes to mental health in the communities he serves. His clientele includes people who are in situations like he once was—young adults living with addiction, among other challenges. He said video game addiction in particular is a growing problem without a lot of available support.

“I feel like I’ve really become the person the me that was struggling needed,” he said.

He credits the UWO community for helping him see his value, what was possible for his future and gain the tools to make a difference for people through mental health therapy.

The University, and especially the social work faculty, gave him a home and the confidence he needed to realize his potential, he said.

Colleen Hansen, an ad hoc faculty member in UWO’s social work department since 2005, had Holman in class and was his faculty adviser. She remembered Holman as a quiet—but very insightful—student.

“Adam did share a little bit about his challenges in papers for class,” she said. “Though he struggled emotionally at times, Adam did not let this stop him from moving forward academically. He has the ability to share his insight in a kind, supportive manner. … Adam was and is an exceptional social worker and I have no doubt he will continue to be successful in his practice.”