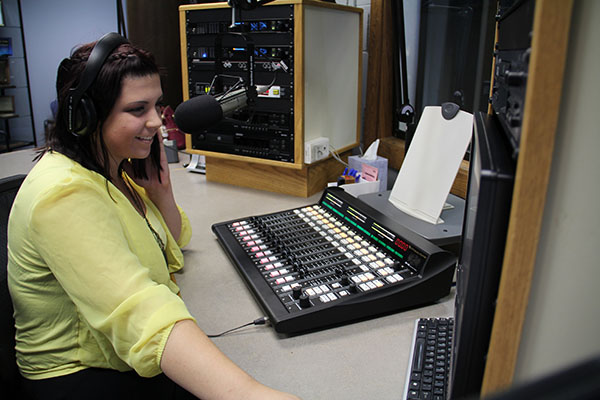 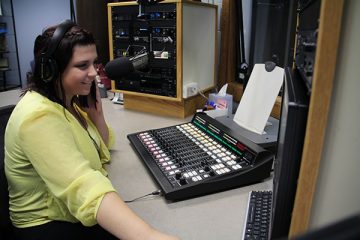 Student station manager Allyssa Lile checking out the new console in the WRST on air studio.

The radio broadcast facilities at University of Wisconsin Oshkosh station WRST-FM received a major upgrade over the summer in time for the new academic year.

New consoles were installed in all four of the station’s studios. Broadcast consoles are the heart of any radio studio, routing and mixing audio for radio productions and broadcasts. Historically, every piece of audio equipment in a studio was hard-wired into that studio’s console, limiting flexibility.

The new industry standard has audio components wired into an input/output device called a “blade.” The audio is then routed from the blade to wherever it’s needed via network computer lines. With the advent of this new way of handling audio, the term “console” is starting to be replaced by the new designation “control surface.”

WRST was able to apply for funding for this project from the University’s Student Technology Fee account. However, WRST decided to not pay for installation by the manufacturer. Rather, it was decided that UWO’s Radio TV Film engineering staff would install and integrate the new equipment, saving thousands of dollars in the process. RTF Director of Engineering Bill Kerkhof says since he is responsible for maintenance of the equipment, it was important for him to learn it “from the ground up.” He adds: “That way I can convey my understanding to the students and help them understand it.”

RTF engineer Andy Radig had just joined the department in April and was able to immediately work on this upgrade.  He says it was exciting to get involved in this major project at WRST as his first focus of work and adds it was one of those “rare opportunities to rethink the entire technical plant.” Radig says as an alumnus of the RTF program, he was proud to see that students have access to state of the art radio broadcasting equipment through this upgrade.

Kerkhof and Radig had to carefully plan the upgrade, not only to ensure at least one studio continued to function to keep the station on the air, but also to have a second studio available through mid-July for high school students taking RTF’s offering in the UWO Pre-College program called “Arts in the Media.”  The engineers also worked together to solve some issues that had even stumped the manufacturer, such as using the infrastructure to send out the signal that synchronizes the studio clocks and devising a way to get two phone calls on the air simultaneously, something the company didn’t think possible. This installation also required close coordination with WRST’s existing software. One software supplier had to modify their program to work with the new WRST equipment. As a result, that firm is now able to promote their product as being fully functional with this new technology.

For listeners, the benefits are already evident. The signal processing in the new equipment means the station sounds markedly better both over the air and online. Also, the processing allows the equipment to be “tuned” to the specific brand of microphone at the station and all voice work will sound better as well.

Radio TV Film remains committed to providing students access to cutting edge technology as part of their instruction and giving them the most authentic media experience possible as they prepare for careers in the industry.