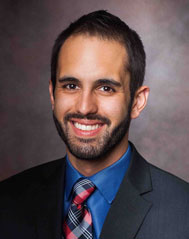 As president of the Association of Native American Medical Students (ANAMS), University of Wisconsin Oshkosh alumnus Aaron Robinson ’12, of Madison, is passionate about promoting Native Americans in medicine.

“We focus on networking and reaching out to different universities and schools to help inspire Native youth to be physicians, too,” Robinson said. “As president, I look to expand that network and move our organization forward.”

Robinson is wrapping up his medical degree at UW-Madison to pursue a career in emergency medicine.

He earned his master of public health from the University of Minnesota and his bachelor of science from UWO.

While an undergraduate at UWO, Robinson worked with Curt Radford, an internal medicine physician in the Oshkosh area, to show clinical experience on his medical school application. Now, he will be returning to Oshkosh to complete a six-week clinical rotation.

“I thought it would be really cool to return as an almost-graduated medical student and do clinical work in Oshkosh,” he said.

Robinson said UWO professor Dana Merriman has been a huge driving force behind his education.

“Merriman challenges her students and expects a lot of from them, both academically and professionally, which makes her stand out as a professor,” Robinson said. “Challenging her students gives them a strong foundation for future endeavors.”

“I would say that UWO provided Robinson with just the right balance of academic challenge; early, honest and supportive pre-professional advising; complementary extracurricular opportunities; all with a reasonable study-life balance,” Merriman said.

Robinson said UWO helped prepare him for the medical school curriculum. He is currently applying to programs that will train him as an emergency physician.

“UWO provided me with an academic challenge that helped me develop skills that allowed me to succeed in medical school,” Robinson said.