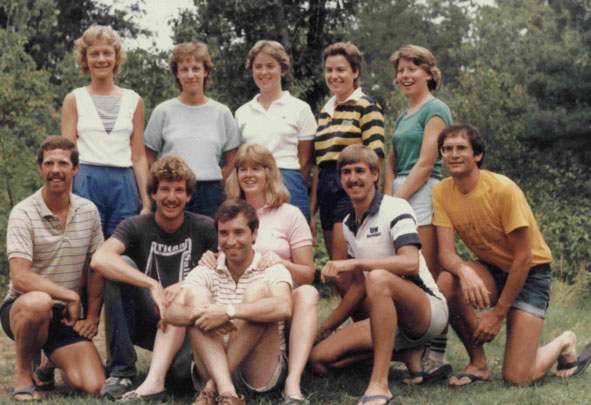 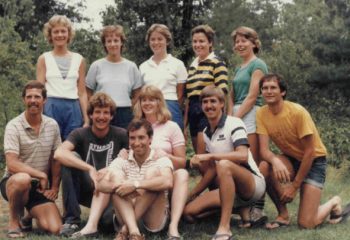 Through camping trips, Door County weekends and other fun get-togethers, University of Wisconsin Oshkosh alumni have maintained their friendships over decades.

Graduation was not the end for one group of classmates that has been camping since the 1980s or for the Kappa Gamma sorority sisters who have gone to Door County every year since 2010.

Six families with UWO ties have gone camping together every fourth weekend of July since 1985.

“It is interesting that some of the children have started their own college camping weekend,” Woelfel said. “I think we may have instilled the importance of keeping connected with your friends and planning a weekend to enjoy everyone.”

Camping is a great time for everyone to catch up and share memories.

“It has been really neat watching our children grow,” Sue O’Brien said. “We enjoy each other’s company and are interested in keeping up with what our families are doing.” 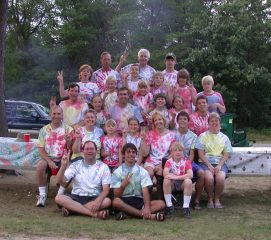 Over the years, they have camped at 15 different locations. They tried a cabin once, but it was not the same experience as camping in tents where they are all close together. Even though they have had to sleep in wet tents after it rained, they still prefer it over a cabin or hotel.

“Life has been much better with the switch to a pop-up camper,” Doug Waterman said.

But some of the campers are still troopers and don’t mind sleeping in tents.

Over the years, the campers have enjoyed swimming, fishing, canoeing, beach volleyball, tie-dying shirts and karaoke.

There have been some funny highlights from the trips, including their boat breaking while water skiing, their kids getting poison ivy, an ambulance ride after a competitive game of pickle ball resulting in a broken leg and a herd of raccoons stealing their food.

Denise Wirth said the former classmates have all managed to stay together because they have a lot in common and miss each other when apart. They all went through major life events at the same time, such as graduating from college, building their careers and having children.

“We’ve been through good and bad together,” she said. “And it’s just so comforting to know you can count on someone who knows you well. These people are a really solid, caring, loyal group of individuals.” 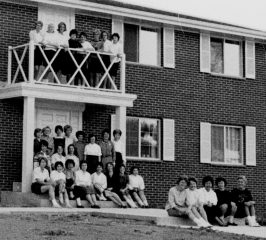 Like the campers, the Kappa Gamma Sorority sisters have got together for years.

Mary Gaynor Hill ’64, of Oneida, said it started in 2010, when she received a call from Jan Judson McCain ’64, of Columbus, Ohio, saying that she and her husband Thomas McCain ’65, were heading to Door County.

Several other Kappa Gammas also were going to be in Door County, so they planned a lunch at White Gull Inn in Fish Creek that nine members of the sorority attended.

“At that point, many of us had not seen each other since college graduation, 46-plus years earlier,” Gaynor Hill said. “Much had changed in physical appearance and agility. Some things did not change: voices, speech patterns, gestures, movements and laughter.” 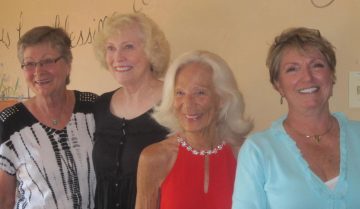 After the lunch, they continued to catch up at Penny Brixius Pfister’s ’65, cottage outside of Fish Creek. Now, they head to her cottage every year.

Many of the sorority sisters who attend live in Wisconsin, but some have traveled from Arizona, Florida, Kansas, Michigan, Minnesota, Missouri, Ohio and Oregon.

When they get together, they will do a luncheon with an “in the round” discussion to catch up on everyone’s lives. Afterwards, they will go to Brixius Pfister’s cottage. Their husbands all play golf together. Three of the husbands even entertain everyone with their musical talents.

Thomas McCain; Gary Stang ’68, of Kansas City, Missouri, married to Judy Tighe Stang ’65; and Clay Marquardt ’65, of Springfield, Illinois, married to Karen Marquardt ’65, will play their ukulele, guitar and auto-harp as they lead everyone in songs from their days back at Oshkosh.

“We came into our non-judgmental, heart-warming circle from different places and along different paths, but we bonded with understanding, compassion and affection,” Gaynor Hill said. “This bonding and connection are the qualities that pull me back to the reunion each year.”

How do you stay in touch with college friends? Share your thoughts by commenting below.