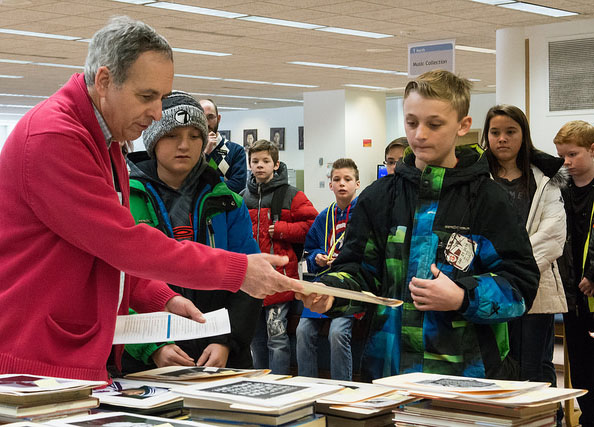 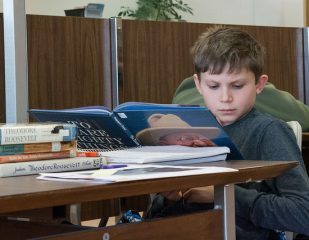 The 2017 National History Day (NHD) theme of “Taking a Stand in History” invites students to look across time and geography to find examples of people who took risks and made a change. Students came to campus to conduct primary and secondary research and then transform the information into a paper, exhibit, performance, documentary or website.

“We are excited to have the opportunity to foster the love of research in students at an early age. It is important they learn about informational literacy, that ability to take sources, understand them and validate them,” Ranger said. 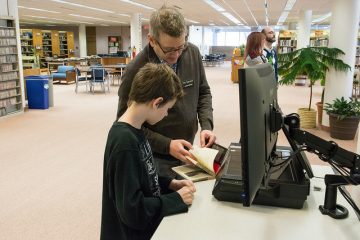 Marisa Finkey, information literacy coordinator at UW Oshkosh, taught the students how to access library catalogs and websites for reference help and log into Badgerlink, an online directory of newspapers and magazines. Steve Katz, education materials center coordinator at Polk, pulled additional reference books and background information from the library’s collections for each student according to their topic. Ted Mulvey, information literacy librarian, and Erin McArther, distance education librarian, were on hand to help students scan and store information on USB drives.

“It is always impressive to me how focused the students are while researching their topics and how grateful they are for this experience,” Finkey said.

UW Oshkosh graduate and current Richfield social studies teacher Heather D’Alessio is proud to be involved with NHD project for the past four years.

“I think it is wonderful that I am able to introduce students to my alma matter and have them utilize these resources. The writing skills, critical thinking and empathy they learn during this project will aid them throughout their schooling,” D’Alessio said.

The students who visited UW Oshkosh to participate in the research project are not just preparing for a test but digesting and understanding the history while presenting it in a creative package.

The Richfield students will take the new skills and research that UWO staff members helped them gather and begin preparing their projects for Richfield National History Day event. From there, students will be selected to take part in regional contests running in March and possibly move forward to the state competition in April.

“Typically we have four to five sixth grade students advance from our school to the state competition,” D’Alessio said.