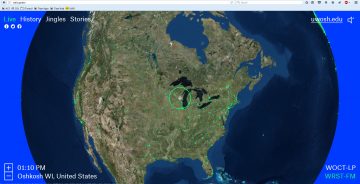 The internet audio stream of WRST-FM at the University of Wisconsin Oshkosh is now available worldwide through Radio Garden, a new website that is part radio streaming portal and part art installation.

Radio Garden is the work of Studio Puckey in Holland. It uses real satellite imagery of Earth and adds green dots to locations that have participating radio streaming stations. Users can move a cursor around the globe to zoom in on a particular location and listen to the stream. The site also provides a link to the streaming station’s website. As users move the cursor between stations, one station will fade to static before the next fades in, just as if the person was using a radio tuner. One of the designers was quoted as saying that the use of satellite imagery rather than maps suggests there are no borders to radio.

The site was profiled on National Public Radio and in industry magazines, but the designers were not prepared for its popularity, with 12 million unique visitors its first month. Interestingly, the country with the most logons is India, followed by Brazil, the U.S., Saudi Arabia and the United Arab Emirates. The popularity is a problem for this publicly-funded site, and the founders are trying to find a way to keep the service going without having to resort to advertising.

The WRST stream is one of about 8,000 worldwide included on the site. Those tuning in will hear WRST’s student-produced music, news and sports programs from 1 p.m. to 2 a.m. daily and alternative music programs from the Global Community Radio Network at other times.

The WRST stream can also be accessed directly at www.wrst.org.