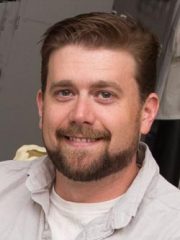 A team of scientists led by a University of Wisconsin of Oshkosh geologist has dug up a promising new hypothesis to explain the origin of the densest collection of Jurassic dinosaur bones discovered to date.

The new study, published in the June issue of the peer-reviewed journal PeerJ, uses fossil and chemical analyses to better understand the Cleveland-Lloyd Dinosaur Quarry, discovered in the 1920s in central Utah. Unlike typical Jurassic bone beds, it is dominated by the predatory dinosaur Allosaurus.

“It’s not your usual bone bed. There are three times as many predators as prey and most of them are relatively young juvenile dinosaurs,” said UWO’s Joseph Peterson, a vertebrate paleontologist.

Peterson served as the lead author on the project in conjunction with researchers from Indiana University of Pennsylvania, UW-Madison and UW-Parkside.

For decades, scientists have debated the origin of the bones at Cleveland-Lloyd, hypothesizing that the dinosaurs had gotten stuck in the mud, were poisoned or had died due to drought.

In 2012, Peterson’s team decided to take a crack at solving the mystery. For the past five summers, the researchers, including students from the universities, have surveyed the quarry and excavated more than 50 bones.

Chemical analysis and microscopic study of bone samples suggest that the quarry represents numerous mortality events, which brought the dinosaurs to the site over time, rather than in a single fatal event.

Also, the bones appear to have been introduced to the deposit after death, suggesting that the dinosaurs died up stream, washed in and rotted in a small pond over time. This created an environment in which fish, turtles and crocodiles could not survive, and other dinosaurs could not eat the carcasses.

Peterson said the new data helps to explain why the quarry lacks typical pond fossils and why the majority of the bones lack gnaw marks.

“The predator trap hypothesis doesn’t hold up,” he said. “Our new approach ties in the other ideas and better explains the complex series of events.”

Back in his lab on campus after another trip to Cleveland-Lloyd earlier this summer, Peterson is continuing to analyze the samples collected. The researchers also are working to develop a 3-D computer model of the quarry to create a living map of the historic site.

The study was funded by a UWO Faculty Development grant and the Bureau of Land Management Youth Field Program.

At TEDx Oshkosh on Nov. 4,  Peterson will speak about the biological evolution over geologic time as an analogy through trends in the automotive industry.