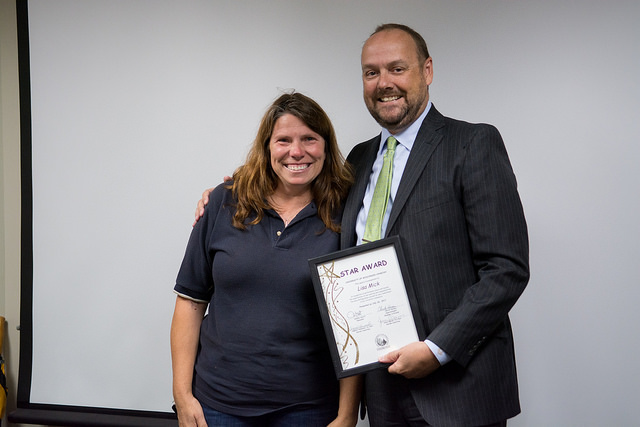 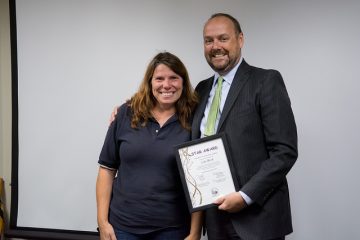 Lisa Mick, who works for Facilities Management as supervisor of buildings and grounds, has been named the recipient of the August 2017 STAR Award.

She was nominated by Missy Burgess, assistant director for student involvement for Reeve Union.

“I would like to submit this nomination for Lisa Mick, University Groundskeeper, for the STAR Award. In the world of Reeve Union, and specifically Student Involvement, we are known for coming up with more ‘creative’ or ‘innovative’ ideas for student events. What this often means is that we want to do things that have never been done before, differently than they have been done before, and/or bigger than they have been done before. We want to host a concert for 3,000 people in the Kolf parking lot. We want to show an outdoor movie on the Albee patio on Opening Night. We want to host a foam party on the lawn between Polk and Harrington. Most of our big ideas happen outside of our space and require the input, direction, and assistance of many other people. Lisa Mick has become one of my favorite people to collaborate with on these ventures.

“To my knowledge, Lisa’s actual job is the maintenance and upkeep of the University’s outdoor spaces. What we often ask her to do is go above and beyond by preparing these spaces for unintended uses. I first got to know Lisa when working on ByeGosh Fest. She worked to make the student’s vision a reality by attending numerous pre-event meeting and planning for and installing temporary fencing around the space for the event. But, even more importantly, she (and her staff) helped with numerous day-of-show requests and issues that were unanticipated. ‘Can we get 30 concrete blocks?’ Sure. ‘Can we get more fencing?’ Sure. ‘Can we…?’ Sure. In every case, she made things happen almost instantaneously. This event would not be nearly as successful without her partnership.

“What pushed me to write this nomination, though, was her assistance in making two of our Welcome Week events happen this fall. This year, Reeve Union Board wanted to do their outdoor movie on Sunday night of Opening. This is a fairly routine event; it shouldn’t be a problem. But, about 10 days before the event, someone pointed out that the Albee patio wall was in need of power washing before that event could happen. In what undoubtedly is one of the craziest times of year to prepare for move-in weekend, Lisa’s team added this to their already busy list and got it done.

“Even bigger, though, was what happened on Labor Day night. We often coach our students that, ‘Poor planning on your part does not constitute an emergency on my part.’ But, unfortunately, this was just what happened. The students wanted to host a foam party on the Polk/Harrington lawn as a big welcome back event. Countless hours went into planning, assessing risk, getting approvals from all of the required parties, and marketing for the event. In all of that, though, one detail was missed: the event needed water. When we went to set up for the event on the night of, the vendor arrived and promptly asked where the water source was. We all had our deer in the headlights look. We scouted out a water spigot, but it was locked. Not sure what we were going to do, with hundreds of students scheduled to arrive in approximately two hours, I contacted Lisa. Her response, ‘I will be there in 15 minutes.’ She came in from home, turned on water for us, and then located enough hosing to make our event happen. I can honestly say that we would have been sunk without her. A foam party without the foam just would not have had the same impact.

“What sets Lisa apart in all of this, though, is that she approaches everything with a positive, can-do attitude. The night of the foam party, I was admittedly frustrated with the error in planning. Lisa arrived, though, happy and excited to help and acted as if it was the best thing she could be doing right then. Her attitude was contagious and totally changed mine. For example, when I told her we would be very careful not to flood the lawn where the foam party was happening, her response was, ‘No worries, that will just be the best watered patch of grass we have.’ This same attitude has carried across every single interaction I have always had with her. Even though I know we are asking her to do things outside of her everyday scope, she never says no and always makes it seem like helping us is cool and exciting.

“Lisa Mick is someone who goes above and beyond not for the recognition, but because she cares for UWO, its students and loves her job.”