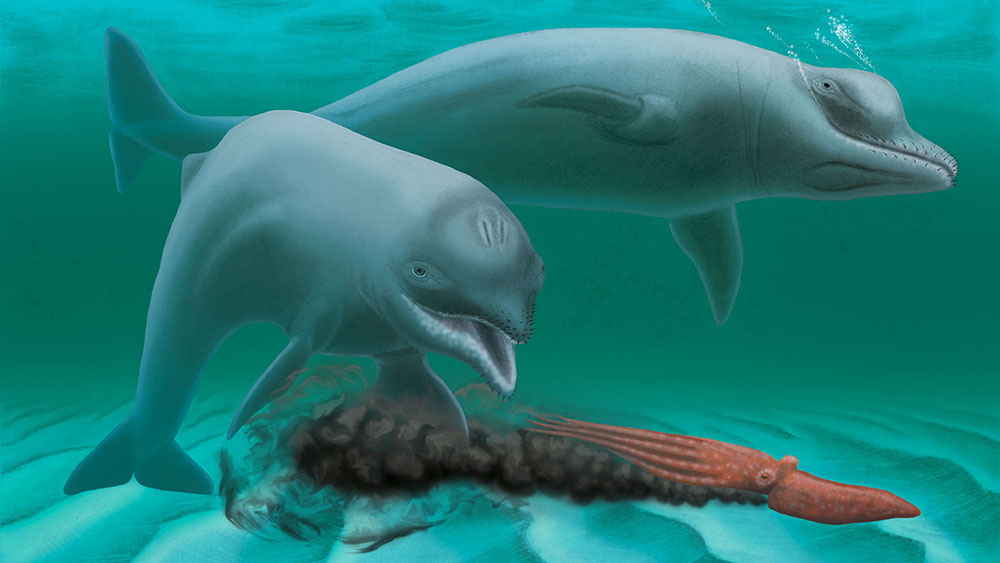 University of Wisconsin Oshkosh biologist Morgan Churchill is part of a study released today that reports a new genus and species of extinct dolphin from more than 25 million years ago.

More than two years in the making, the paper titled “A toothless dwarf dolphin (Odontoceti: Xenorophidae) points to explosive feeding diversification of modern whales (Neoceti)” is now published in the high-profile Royal Society journal Proceedings B.

This newly identified dolphin, named Inermorostrum xenops (“defenseless snout”), was a dwarf dolphin (only about 5 feet in length) with a short snout that entirely lacked teeth.

Inermorostrum dates to about 28-30 million years old and belongs to the family Xenorophidae—an early-evolving group of echolocating dolphins. Echolocation is a sensory system in certain animals in which high-pitched sounds are emitted and their echoes interpreted to determine the direction and distance of objects. All other xenorophids are larger, have snouts that are at least three times as long as Inermorostrum, and have teeth.

“This animal is unique because it is very tiny, it’s a very ancient dolphin,” Churchill said. “It didn’t have teeth, it had a short face and it’s the earliest evidence of suction feeding.” 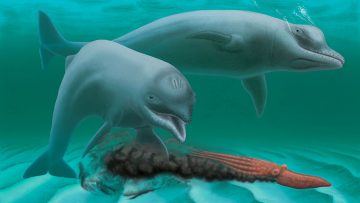 Churchill, who is new to the faculty at UW Oshkosh in the 2017-2018 academic year, worked with colleagues from the College of Charleston, the Canadian Museum of Nature and the New York Institute of Technology on the research and paper.

The skull of Inermorostrum was discovered by a licensed diver in the Wando River, which had eroded out of the Ashley Limestone. It is now on display in the Mace Brown Museum of Natural History at the College of Charleston.

Churchill said there is a lot to be learned about evolution from this research—and he is fascinated by the patterns in evolution.

“Modern whales rapidly evolved, which makes them a fascinating subject for evolutionary studies,” he said. “Knowing how they evolved can tell us a lot about how evolution works.”

“Inermorostrum is an important species because it indicates that it took only four million years to evolve a toothless, suction feeding specialist from ancestral, toothy whales. This expands what we know about the different lifestyles of early evolving whales.”

Churchill said a whale evolution provides great examples for science education and said this type of research lays the groundwork for future questions and study.

“Whales and humans all have the same bones, they just have different shapes. My knowledge of the human body really helps me in the study of other animals,” Churchill said.

Churchill said he is looking forward to working on a campus and providing opportunities for both undergraduate and master’s-level students to participate in research. These include future studies on the evolution of whales and other marine mammal groups from South Carolina and elsewhere.