Greg Gard is asking the Oshkosh community to be part of his game plan—helping those impacted by cancer.

Gard, head coach of the University of Wisconsin-Madison men’s basketball team, began an initiative, Garding Against Cancer, after losing his father, Glen Gard, to cancer in October 2015.

A special fundraising luncheon is planned from 11:30 a.m. to 1 p.m. Thursday, Sept. 13, at the Alumni Welcome and Conference Center on the University of Wisconsin Oshkosh campus. All of the proceeds will stay in the Oshkosh community to assist with cancer care for local patients.

“We are thrilled to partner with the Gard family to host such an impactful event,” said UW Oshkosh interim men’s basketball coach Matt Lewis. “The Garding Against Cancer luncheon is a great opportunity for our community to come together in the fight against cancer and support our hometown heroes affected by this disease.”

The UW Oshkosh luncheon provides a great opportunity to meet Coach Gard, hear about his personal experience with the disease and make a difference for area doctors, patients and families. The event is a precursor to an exhibition basketball game between the two men’s teams in November.

Registration for the luncheon is open. Individual tickets are $75 per person, with $55 tax deductible.

But there’s a way to make an even bigger impact.

Gard is inviting fans to become a Garding Against Cancer sponsor to help fund patient care throughout the Oshkosh area.  A $1,000 sponsorship receives a half-table (up to four people) reserved for the luncheon and supporter recognition at the event

A $2,500 sponsorship receives a full table (up to eight people) reserved for the luncheon, early entrance to the event for a photo opportunity with the Gards, and recognition at the event and through publicity for the event 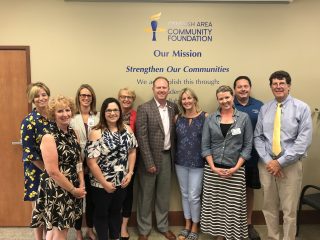 Coach Greg Gard and his wife, Michelle, center, meet with a group of local healthcare and cancer nonprofit leaders, along with Oshkosh Area Community Foundation representatives.

A $5,000 sponsorship receives the reserved table (up to eight), early entrance to the event and photo opportunity with the Gards, recognition at the event and through related publicity, a personalized autographed basketball and invite for two to the UW-Oshkosh versus Wisconsin Nov. 2 basketball game at the Kohl Center.

Major portions of the sponsorship options are tax-deductible.

Greg and Michelle Gard visited the UW Oshkosh campus May 22, discussing plans for the luncheon and the basketball exhibition this fall.

“Although we have always philanthropically supported cancer research, we did not truly understand the magnitude of the disease until it became excruciatingly personal to us,” Gard said on his foundation website relating to the death of his father after a six-month battle with a form of brain cancer. “A few months following his death, we began reflecting on our journey and having conversations about how to embrace and carry forward the lessons we had learned.” 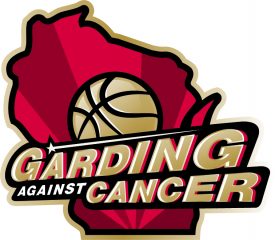 The couple decided they wanted to help other people while honoring Greg Gard’s father. They believed impact should be across the state of Wisconsin—with presence felt by patients and researchers. Garding Against Cancer was launched in December 2016 and has raised more than $2.2 million.

“Partnering with the UW Carbone Cancer Center and Wisconsin Foundation and Alumni Association, we’re pursuing a mission to philanthropically support the cancer-fighting community of Wisconsin,” the Gards said on their website. “We will provide funds to those in the medical field who have made it their life’s work to find a cure and /or better treatment options for patients battling cancer. We will promote the welfare of people with a cancer diagnosis as well as the families and friends who support them.”

The Titan Men’s Basketball exhibition game with UW-Madison is slated for Friday, Nov. 2 at the Kohl Center in Madison. Wisconsin men’s basketball single-game tickets go on sale in early October at UWBadgers.com

In the event no tickets are available, patrons are invited to check StubHub, the official fan-to-fan ticket marketplace of the Wisconsin Badgers. 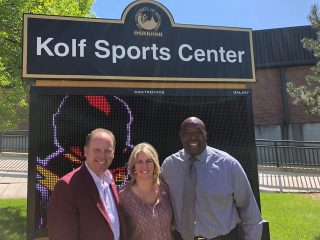 The Garding Against Cancer Exhibition Game will recognize a “starting five” lineup of medical professionals from the Oshkosh area and UW Carbone Cancer Center in Madison and as well as local cancer patients.

“Our exhibition game against the University of Wisconsin is a tremendous opportunity for our team,” Coach Lewis said. “From a basketball standpoint, it will challenge us and give an early indication of where our team has grown—and where we continue to grow—early in our season. The game is also an exciting and rewarding way to bring out the community in support of the Garding Against Cancer initiative. It will undoubtedly be a memorable experience for our program overall.”

UW Oshkosh is coming off a record-setting season in 2017-2018, tying the school record with 25 wins and reaching the National Collegiate Athletic Association Division III title game for the first time in school history.