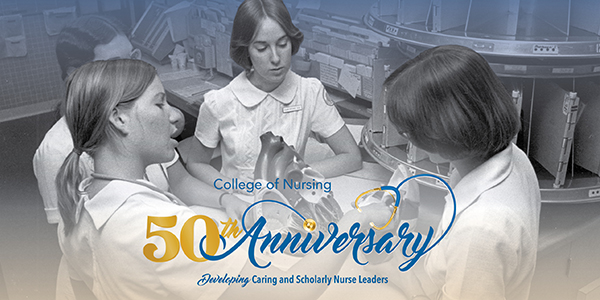 In 1966, the Wisconsin State University-Oshkosh School of Nursing began with an enrollment of 27 students in a baccalaureate nursing program. Classrooms, faculty offices and a Nursing Arts Lab were located in Pollock House, the former home of William E. Pollock, president of Oshkosh Overall Company, now OshKosh B’gosh.

The School of Nursing moves from the historic Pollock House to the newly completed Nursing Education Building.

1973
Enrollment in the College increases to a capacity of 150 students per year.

1974
The first class of students is admitted to the CON’s new Master of Science in Nursing Primary Care Nurse Practitioner (NP) Program created by Nancy Elsberry and Hildegarde Siegel. This is the first primary care NP program in Wisconsin.

1976
Hildegarde Siegel is dean from 1976 to 1979. The first issue of the College’s newsletter, now called CONtact magazine, is published.

A bachelor’s degree completion program for registered nurses is established.

1984
The CON Research Center is initiated to assist faculty and students with research and scholarly endeavors.

Eta Pi, the UWO chapter of Sigma Theta Tau International, is granted a charter in 1984.

1987
The nursing skills laboratory is renovated with financial support from the Elmer Leach Foundation.

1993
The government-funded “Family Health/La Clinica” medical van is established and travels to migrant camps to provide exams and treatment for Wisconsin’s migrant workers and their families.

The first Nightingale Awards are given to honor bedside nurses in Oshkosh for clinical excellence in patient care.

Merritt Knox is dean from 1994 to 2004. Dean Knox leads CON faculty and staff into the computer age and through technological change.

1995
The Living Healthy Community Clinic is established in the basement of the Nursing Education building.

The Simulation Laboratory is established.

2006
The Great Lakes Chapter of the American Assembly for Men in Nursing is established.

2007
International clinical opportunities are established in multiple sites around the world, including Africa, India, Nicaragua and Peru.

2011
The Master of Science in Nursing for the Family Nurse Practitioner transitions to a Doctorate in Nursing Practice degree.

The CON Advisory Council and the Partnership Council are founded.

A quarterly alumni newsletter is launched.

INTO THE FUTURE 2015 and Beyond

CON moves into its new space in January 2016. A time capsule is dedicated and will be opened during the 100th anniversary celebration in 2066.

The College celebrates its 50th anniversary with an enrollment of more than 800 students in the 2015–2016 academic year.