The LGBTQ Resource Center first opened its doors in fall 2008 at the University of Wisconsin Oshkosh. Celebrating its 10th anniversary this year, the center has a number of exciting events in store to mark the progress, challenges and accomplishments faced throughout the years.

For Sylvia Carey-Butler, associate vice chancellor of academic support of inclusive excellence, it is hard to imagine UW Oshkosh without an LGBTQ Resource Center, yet that was the case over a decade ago.

“As we celebrate the LGBTQ+ Resource Center’s 10-year anniversary, we have much to be thankful for,” Carey-Butler said. “The center has been essential in providing LGBTQ students a space on campus and has become an important educational resource serving the entire campus. 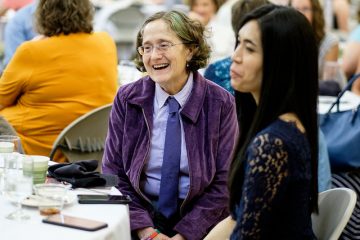 Liz Cannon has been the center’s director since its inception. She also is a senior lecturer in women’s and gender studies and coordinates the LGBTQ Studies Certificate at UW Oshkosh. Under Cannon’s direction, the center has taken a progressive approach, responding and adjusting to the dynamic needs of the LGBTQIA+ (lesbian, gay, bisexual, transgender, queer or questioning, intersex and asexual or ally) community.

With humble beginnings back in 2008, functioning in a space no larger than a single office, the center has since grown and flourished as a hub for LGBTQIA+ students, employees and allies of UW Oshkosh.

Having reached a 10-year milestone, Cannon and her team are rebranding the center to better reflect the individuals it represents and the services it provides. Starting in 2019, the center will move forward as the LGBTQ+ Resource Center.

Adding the “+,” a seemingly minor detail, denotes another step toward inclusivity. While LGBTQ clearly identifies the community the resource center addresses, the “+” signifies there are many more identities in this community, including but not limited to asexual, intersex, nonbinary, agender and aromantic. 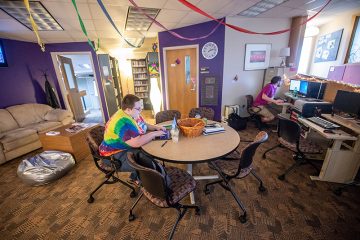 “What I love about our community is that we are always growing, we are always changing, and we are always trying to be more inclusive,” Cannon said. “When we look at how many people don’t fit into the heteronormative definition of sexuality and gender, we find there are so many other ways an individual can present themselves to the world.”

For more than a year, a great deal of thought and discussion took place to carefully update the name of the LGBTQ+ Resource Center.

“We want the ‘+’ to say, ‘We are a center that is so inclusive; there are so many identities among us that we can’t possibly give a letter to each,’” she explained. “And yes, I do struggle with the fact that we are still seen as privileging certain identities by using the recognizable acronym ‘LGBTQ,’ but at this moment in history we are stressing visibility.”

With a new title comes a new online presence, as the LGBTQ+ Resource Center sports a modernized website to accommodate the growing range of services, events and resources it provides. 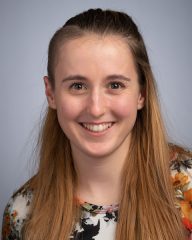 Also joining center is a newly appointed program assistant, Gabryelle Thompson, who brings a fresh perspective to the team.

Thompson hails from Abilene Christian University (ACU) in Texas, where she ran Division I track and cross country. Aside from her involvement in athletics, Thompson was renowned for the legacy she left ACU’s LGBTQ community. She and several of her peers took crucial steps to make the campus a more LGBT-inclusive environment.

As a direct result of Thompson’s proactive advocacy, ACU has significantly changed its policies in LGBT student affairs and involvement. She said taking part in creating progressive, lasting policies at her alma mater has fueled her passion and drive as a queer advocate.

Thompson has since found her home at UW Oshkosh working with Cannon in the center. In addition to her duties as program assistant, she is introducing a new series of educational programming called Lighthouse. Lighthouse aims to shine light on visible aspects of queer life and culture to help LGBTQ+ students grow and find comfort in their identities.

“Visibility in the LGBTQ+ community is important because it gives students the opportunity to see successful queer individuals, couples and lifestyles,” Thompson explained. “This series will showcase some of the amazing individuals we have in the surrounding community and inspire students to thrive as who they are.”

Several other events are set to take place during spring semester to observe the LGBTQ+ Resource Center’s 10-year anniversary. 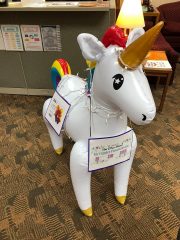 Making its way around campus is the center’s mascot, Uni. Uni travels from office to office on campus rallying support for the LGBTQIA+ community. Uni has rolling pronouns, so in addition to publicizing the anniversary, Uni brings awareness to an important facet of queer culture.

The LGBTQ+ Ally March also will celebrate 10 years on April 17.

Spring semester will culminate with center hosting a retrospective art exhibit in collaboration with Emmet Sandberg from UWO’s art department. The exhibit will be on display May 6-17 in the Gail F. Steinhilber gallery at Reeve Memorial Union with an opening reception and special celebration held May 6.

UW Oshkosh students and employees as well as community members are welcome to visit the center during regular business hours in the lower level of the Campus Center for Equity and Diversity, 717 W. Irving Ave.