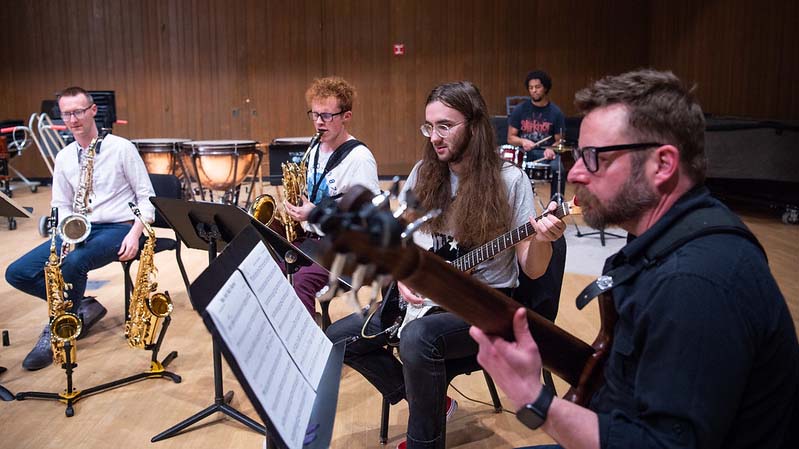 Experimental music and a lot of improvisation will be showcased by an unlikely ensemble composed of seven University of Wisconsin Oshkosh students and a pair of music faculty members. 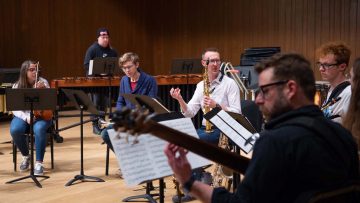 “This semester’s concert is quite unique,” Mayrose said. “At the end of the semester, we always ask the students what they would like to explore in the next concert. One student mentioned that they would love to play music by Frank Zappa. So we created this concert to feature music by artists that cross genres or have a foot in several types of genres.”

The group rehearses once per week and students can earn one college credit. 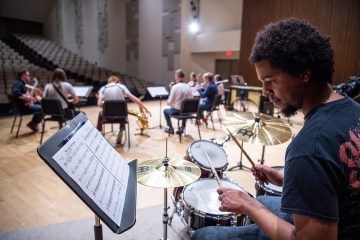 UW Oshkosh senior music industry major, Ryan Thomas, of Janesville, has been part of Sounds Like Now for 3.5 years, and he calls it a “life-changing” group compared to anything he’s done at UWO.

“Primarily the reason is the abnormal kind of stuff we play and see on the page,” he said. “I remember coming into this ensemble and getting a piece that was all drawings and we had to interpret it on our instruments and compose parts for each section. In my mind I literally thought, ‘How the heck am I supposed to make music by looking at a drawing of a flower pot?’”

Thomas’ primary instrument is percussion. He has a dual emphasis in music business and recording technology. 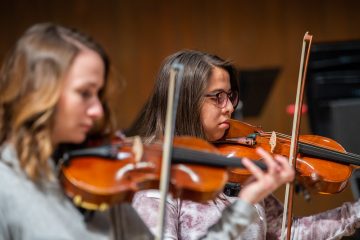 A senior music industry major from Milwaukee, Giselle Oliva, plays in the ensemble as a hobby—as a break from her typical repertoire with the viola.

“I have played the viola for 14 years now, and I admire the instrument for its rich, dark tone,” she said. “It has granted me wonderful opportunities, such as being part of Sounds Like Now.”

Oliva said her time with the ensemble has helped her develop different skills as a musician, including improvising, chamber group skills and the ability to be comfortable with pieces that sound strange.

“I enjoy the instrumentation in the group because I get to play with woodwind, brass, guitar and percussion players. I would never find myself, as a violist, having a part in unison with a baritone saxophone if it weren’t for this group,” she said.

Sounds Like Now held its first concert four years ago. The ensemble performs music of the late 20th century and the 21st century and is not music more conventional ensembles regularly program.

Student members fluctuate and instructors do not know what the ensemble will look like until the first day of classes. There are several students, including Thomas, who have been part of the group for multiple semesters.

Thomas enjoys the opportunity to play with his professors.

“Compared to band and orchestra settings, we have a lot more freedom to interpret, improvise and play extended techniques on our instruments,” he said. “This, along with having nontraditional notations, such as squiggly lines, board game-looking scores and written-out instructions to play the piece, makes it way different than those other traditional groups.” 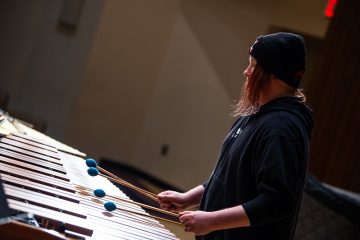 One of the pieces he wrote called Infared Nova (listen here), incorporates guitarists playing pencils between their strings, bowed cymbals, screwdrivers and other unconventional techniques.

Thomas said the sounds that come out of the ensemble are unpredictable and can range from some “truly ugly moments to some amazing beautiful moments together.”

All of the music for the current ensemble was arranged by Mayrose, who plays electric guitar and electric bass, and colleague Drew Whiting, who plays saxophones.

In addition to Thomas on percussion and Oliva on viola, students who are part of the ensemble this semester are Sydney Behlman, violin; Noah Eckstein, percussion and electric guitar; James Keuler, percussion; James Kies, saxophones; and Reegan Van Camp, trumpet.