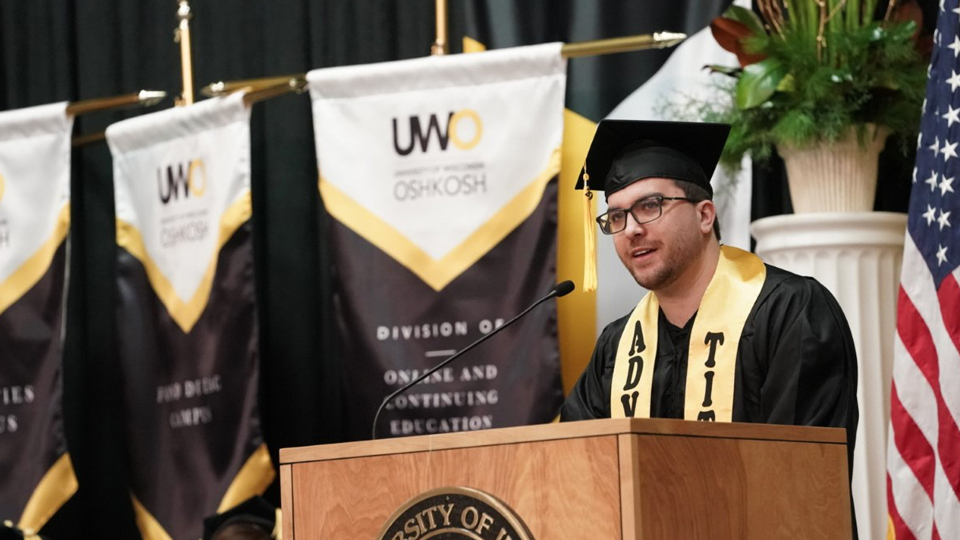 Leo Costello, of Oshkosh, offered the follow remarks as the student speaker at the University of Wisconsin Oshkosh’s 2019 midyear commencement ceremony. He graduates with a multimedia journalism major and a theatre minor.

Hello 2019 graduating class! First of all, congratulations! For a while there, I didn’t think I’d make it this far and I’m sure some of you didn’t think you’d make it either.

I’d like to begin by saying that I’m really nobody special despite my being up here. In fact, I’ve always thought these caps and gowns were pretty silly, alluding back to traditions most of us don’t know or care about. Anyways, I’m going to take off my cap so you can see me not as a figure of authority, but as a peer.

Students might know me from my headshot in the Advance-Titan or the student who asked way too many questions in class. Professors, faculty and staff, though, might recognize me as a student who’s been on campus for 10 years.

That’s right. My first semester at UWO was in the fall of 2009, back before Sage Hall was built – back before my hairline receded to the point you see now.

I’m not up here today to recite empty platitudes like “This is your day,” “the future belongs to you,” or to read aloud quotes from Dr. Seuss’ Oh, the Places You’ll Go. I’m up here today to briefly share with you my 10-year battle with clinical depression in hopes that maybe one day, one of you might think back on today to help yourself get back on your feet, as well as to expose the mental challenges many other students and I face during our academic career.

During my third semester at UWO, I realized my major in English education wasn’t for me. This, along with many other things, sent me on a spiral of depression that caused me to stop attending class. Every once in a while, I’d be able to get through a semester, but something would always knock me back down. My grades plummeted as I failed all my classes every other semester. I got kicked out of the honors program, I lost friendships, and I lost myself. I pretty much did nothing but lay in bed watching movies and YouTube videos, and playing video games. I eventually realized I had a problem and moved back in with my parents for support. I grew up literally five blocks from where we are right now. I also sought out the UWO Counseling Center and Student Health Center to get some help, but it wasn’t enough.

After the second time I dropped out, I wasn’t allowed to come back right away. I took my chances in La Crosse where I eventually landed a job as a videographer at a local news station, but that’s where my depression was at its worst. I lived by myself and only managed to make one friend, so I felt completely alone. I didn’t think I’d be able to go back to school to graduate. It wasn’t until my mom called me one day to say I should just get a working-class job like an electrician that I decided, “Screw it, I’m going to get my degree.” My mom has always been the most supportive person in my life. She’s here today. Hi, mom. All it took was a little doubt from her to get back into gear.

I originally wrote about my battle with depression in the Advance-Titan to help students get out of “the cave,” as I call it, so they might be able to graduate. Obviously, all of you made it this far, but you never know how bad it’s going to be out there. I still get depressed from time-to-time. I’ve learned that all it takes is some self-analysis and a bit of humility and a sense of humor to get back into the swing of things. If there’s one thing I’d like you all to remember from my brief time up here today, it’s that no matter how bad things get in here (point to head), it’s never as bad as it seems and there’s always a way out of the cave. So, whether you’re feeling completely alone, or your family has given up on you, or you feel like you’ll never get out of the cave, know that you are not alone. If I can bounce back, there’s hope for you too.

10 years and 151 credits since I first enrolled here, I’m glad to be standing here today. I couldn’t have done this alone and I’m thankful for those who helped me along the way.

To me, my diploma is not a receipt of completing academic requirements, but rather a symbol that I have overcome my personal battle with depression, at least to the point where I can accomplish goals I set for myself. I’m certain that all of you can also view your diploma as a symbol of your own personal victories. So when you look back on today, or look at your diploma hanging on the wall, remember what it represents to you besides a series of papers, tests and financial debt.

I told myself I’d avoid the cliché of quoting somebody in my speech, but I just can’t help but end with a quote from the 1995 classic, Tommy Boy:

“You know, a lot of people go to college for seven years.”

Well, I’ve got three years on Tommy, so I guess that means I’m ready to receive my honorary doctorate. Thanks for listening and congratulations!