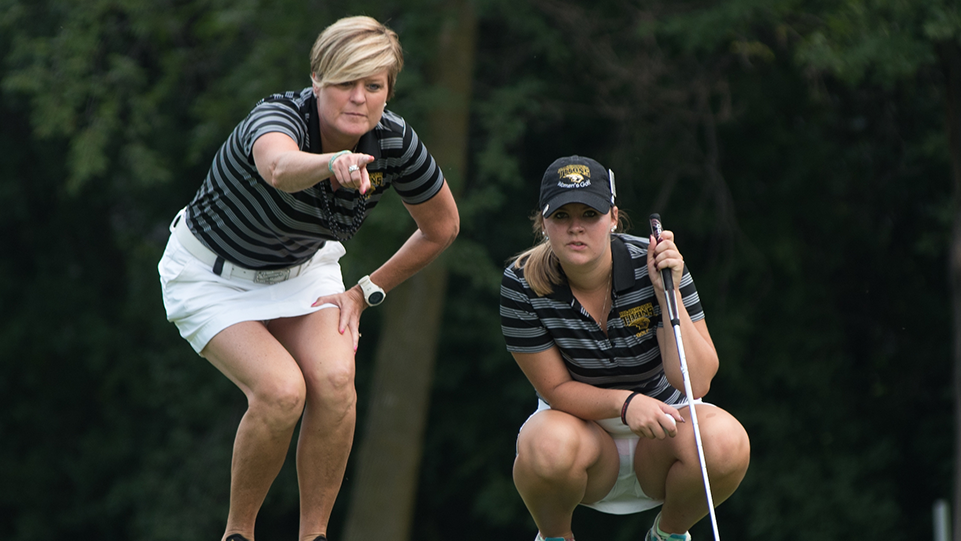 UW Oshkosh head women’s golf coach Liza Ruetten announced Friday, Feb. 14 that she will retire this summer after an eight-year run of leading the Titans.

Ruetten took over the UW Oshkosh program during the 2012-2013 academic year and was named the 2015-16 Wisconsin Intercollegiate Athletic Conference Coach of the Year after leading the Titans to the league title and a 14th-place finish at the NCAA Division III Championship.

“I have been so fortunate to have held my dream job as the head women’s golf coach at UW Oshkosh for the past eight seasons,” Ruetten said. “I’ve had the privilege of coaching the most talented, hard-working and dedicated young women over the years and I’m honored to have been a part of their development, both on and off the course. I will be forever grateful to Darryl Sims (Director of Athletics) and Vicci Stimac (Associate Director of Athletics) for granting me the opportunity to be a part of the dedicated coaching staff at UW Oshkosh, my alma mater.”

“It has been my pleasure to have had Liza as a member of our Titan family,” Sims said. “Liza brought stability, competitiveness and Titan Pride to our women’s golf program, and she will be missed for that. From her first day on the job, I noticed our student-athletes making significant strides in the community, in the classroom and on the golf course. It was very clear to me that we hired the right person as head coach.”

“Coach Ruetten played a huge role during my four years of playing golf at UW Oshkosh,” Frank said. “She brought a positive attitude to practice every day, constantly encouraged her players and never failed to find a ray of sunshine in any situation. UW Oshkosh and the women’s golf program were lucky to have Coach Ruetten, and I wish her the best in the next phase of her life.”

Ruetten’s student-athletes also excelled in the classroom. Her teams annually had a grade-point average above 3.00 and numerous selections to the WIAC Scholastic Honor Roll.

During the 2018-2019 academic year Frank was chosen as the WIAC Women’s Golf Scholar-Athlete of the Year and a First Team Academic All-American by the College Sports Information Directors of America. UW-Oshkosh also had four Titans – Frank, Richards, Margherite Pettenuzzo and Erika Priebe – named All-American Scholars by the Women’s Golf Coaches Association for a combined seven times.

“Coach Ruetten was one of the major reasons I chose to attend UW Oshkosh,” Richards said. “I knew from the first day I met her that she was not only going to help me refine my golf game, but she was going to be a confidant, mentor, role model and friend for life. She always taught us to have faith in ourselves and believe we could persevere through challenges in our golf matches and life after college. She also taught me how to build my confidence and develop my leadership skills, which have helped me become the woman I am today. I am so thankful and blessed to have had her as my coach. She filled my experience with so many memories, which I will cherish forever.”

Ruetten, who played on the boys golf team while attending Winneconne High School, was a teacher in the Neenah Joint School District from 2000-16. In 2011, she was named Neenah’s Middle School Teacher of the Year for her work as a sixth-grade science teacher and team leader of the Phoenix House at Horace Mann Middle School.

Ruetten was a member of Neenah’s Ridgeway Country Club for nearly 20 years. She spent five of those years assisting the golf professional staff in club tournament organization and youth instruction.

“I have been lucky enough to know Coach Ruetten for the past six years,” said former Titan golfer and current assistant coach Laura Stair. “When I came to visit UW Oshkosh, she was a huge selling point. She has an amazing personality and knew how to make you feel like you fit right in. Coach Ruetten has an extraordinary talent with coaching golf and working with the team. She truly made a huge impact, not only with me as a golfer for the Titans, but also as an educator. I can’t express how fortunate I am to have met her and created the relationship we have today. I wish her all the best with her future endeavors as she will be greatly missed at UW Oshkosh.”

Since the 2016-2017 academic year, Ruetten has also been a member of the UW Oshkosh Athletic Department’s Corporate Partnership Development Team.

Ruetten and her husband, Chris, also a UW-Oshkosh graduate, plan on moving to the Fort Myers, Fla., area. Their son, Justin, is a graduate of UW Oshkosh as well.

UW Oshkosh has three events remaining on its 2019-20 women’s golf schedule – April 10-11 at the Kathy Niepagen Spring Fling in Normal, Ill.; April 18-19 at the Battle of the Creek in Becker, Minn.; and April 25-26 at the Augustana College Viking Invitational in Rock Island, Ill.

A national search for Ruetten’s replacement will begin as soon as possible.